A first half volley from Bradford City defender Anthony O'Connor was the difference between the Bantams and the ten men of Grimsby Town, as the Mariners league status worsened at the foot of the table.

Anthony O'Connor netted his third of the season, taking advantage of a major deflection before diverting the ball past the Grimsby goalkeeper.

The headlines will be directed towards the dismissal of Stefan Payne however, as the Grimsby forward foolishly headbutted team mate Felipe Morais at half-time to curse the Mariners to ten men and damage their chances of taking anything from West Yorkshire.

Bantams midfielder Gareth Evans made his 100th appearance for the club across two spells, and even marked it with an assist.

Prior to kick-off, Bradford joint manager Conor Sellars described Grimsby as "hard to beat" and that the Bantams can "expect a tough game", despite the Mariners dreary league position at the foot of the table.

Sellars' fear looked to be inspired by Grimsby's eight game unbeaten run, which included a draw against Cheltenham Town on Monday.

However, the youngest manager in the football league, at 29-years old, must have reminded his side of complacency. Some valiant defending took place before Bradford broke, with Clayton Donaldson's original strike being deflected into the path of Gareth Evans, making his 100th appearance across two spells with the club, but his half volley was smothered by James McKeown in the Grimsby goal.

The Bantams continued to search for the opener against bottom of the division, as homegrown talent Finn Cousin-Dawson somehow found himself with time and space in the Grimsby box, but his effort was valiantly blocked by the Mariners backline.

But the best chance of the first half belonged to former Grimsby forward Andy Cook, as an excellent cross from Connor Wood found an on-rushing Cook, but the dangerous frontman somehow diverted his header wide.

Thankfully for the Bantams, Cook's dreadful miss was cancelled out just one minute later as the hosts took the lead. Evans, who had had a promising start to the game, had the ball deflected back into his path from a corner and he took aim for his cross. His whipped ball took a major deflection from Grimsby midfielder Jay Matete, directing the ball into the path of an unmarked Anthony O'Connor who volleyed past McKeown from close range to award Bradford the opener.

However, as the game headed into half-time the drama prevailed. In crazy scenes as the players began to leave the pitch, Grimsby forward Payne headbutted his own teammate, Morais, for a slight disagreement on the pitch, resulting in his immediate sending off. A bizarre situation which perfectly sums up Grimsby's season.

City looked to capitalise on their man advantage, as a brilliant switched ball found Danny Rowe who slid the ball into the path of Wood, but his rocket of an effort ricocheted off of the bar.

Grimsby weren't to be underestimated however, as substitute Harry Clifton sped past his man and opened up his body, but his powerful attempt was parried by Bradford captain Richard O'Donnell. Grimsby weren't done either, as a teasing cross found the head of Elliott Hewitt, but he couldn't reach the target as his header flashed across goal.

As the game approached full-time, all bodies were on the line for Bradford, as Grimsby mounted the pressure. But it would all be for nothing. In fact, the Mariners afternoon was summed up as Clifton fired a shot over the stand from the edge of the box, and not long later he picked up the ball in the middle of the pitch, wrongly thinking it had gone out for a throw in.

A huge step in the right direction

A huge leap towards the play-offs for the Bantams, as Mark Trueman and Sellars' side climbed the Sky Bet League Two table to 11th. This position is deceiving however, with Bradford being just three points adrift from the play-off positions and Forest Green Rovers, Morecambe and Newport County all looking unconvincing, a run of positive results could definitely help Bradford further their chances of League One football next season.

A Payne-ful defeat for Mariners

Excuse the pun, but Grimsby and in particular Paul Hurst will be absolutely livid with striker Payne's contributions today. The forward not only disrupted the dressing room and headbutted Morais, but he did nothing on the pitch and it's unlikely he'll pull on the Grimsby shirt again. Nevertheless, the Mariners are now seven points adrift of safety and their football league status is slowly fading.

The goal-scorer and match winner today, O'Connor was a brick wall in the middle of the park when sauntering into his defensive midfield role, and helped break up everything that came towards him. He's had a brilliant season with the Bantams, and that continued today. 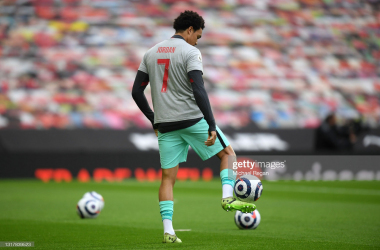 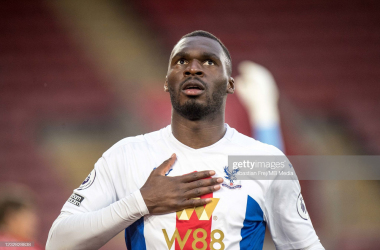 Hard work finally pays off for Christian Benteke 4 hours ago

Manchester United vs Liverpool: Team news, ones to watch, predicted line ups, kick-off time and how to watch 18 hours ago

Aston Villa vs Everton preview: How to watch, kick-off time, team news, predicted lineups and ones to watch 21 hours ago

Should Spurs bring back Juan Foyth from Villarreal? a day ago

What is the right thing for Spurs to do with Dane Scarlett next season? a day ago