That's all from me, folks!

For more pre-season coverage keep an eye across our social media and VAVEL.com :)

The late own-goal from Luca Kilian was all that seperated the two sides today. A game that was very stop start in intensity as you come to expect for these pre-season friendlies.

A lot of positives for both sides and another good work out for Jurgen Klopp's players.

Next up is another German opposition in Hertha Berlin next Thursday!

Billy Koumetio clears from point blank range to deny Mainz a tap in. Superb defending from the Lyon born centre-half.
19:042 months ago

Finally we have a goal!

No man in Red put the ball in the net this time though as a wicked ball from Owen Beck was put into his own net by Luca Kilian.

Origi feels he's fouled in the Mainz box but the referee waves away any appeal.

Seen them given but would be very, very soft.

Mainz work a corner perfectly, dunking the ball to the edge of the box to set up a first time volley but substitute goalkeeper, Adrian, was on hand to tip the strike over his bar.
18:532 months ago

Mainz had a three v two but the delayed pass allowed the Reds to regroup with men behind the ball and force the corner.
18:472 months ago

The 27 degree heat means a drinks break is in order.

The heat and the wholesale changes has meant the intensity has dropped off quite a bit in the second half.

Here's to hoping the fluids the players take on gives them that extra bit of energy to put on a show in the final 20 minutes.

A long ball over the top saw Origi through on goal but the linesman judged the Belgium attacker to be just offside.
18:362 months ago

Origi shows terrific pace down the left but his final ball let him down as it trickled away from a free Curtis Jones and in to the path of a thankful Dominik Kohr.
18:312 months ago

Just a case of the 11 new players on the pitch finding their feet in the opening stages.

16-year-old Kaide Gordon looking the most exciting of the substitutes, thus far.

Just the Reds who have heavily rotated and ready for 45 minutes of action in front of the 3,000 strong Austrian crowd.
18:092 months ago

Liverpool look the better of the two sides but Mainz showing fight and organisation at the back to cope with the Reds' overlapping runs.

Keita has been brilliant this half and is showing fans exactly what he can bring to the table when he is fully fit.

Quick feet in the middle and mazing attacking runs have been a constant today.

Keita plays through Oxlade-Chamberlain on the left but a drop of the shoulder shot from the Englishmen was stopped well by the Mainz shot stopper and forced out for a corner.
17:562 months ago

Mane wins a free kick just outside the box.

Perfect chance for an Alexander-Arnold screamer!

Salah cuts the ball back to Sadio Mane 8 yards from goal but the flucky deflected shot crept just wide of the Mainz post.
17:472 months ago

The German outfit launch a long-throw in to the box which was met by a Mainz head but again Kelleher was on hand to deny the headed effort.
17:442 months ago

Quarter of the way through the game and we've stopped for a quick drinks break.

Mainz work the ball well down the right again and

Aside from today's action it seems Xherdan Shaqiri is enjoying his holiday's and not tuning into LFCTV for the match.

Who knows, maybe he's getting live updates from VAVEL.com!

Dangerous looking ball from Brosinski on the Mainz right but Konate was there in the middle to clear for a corner.
17:342 months ago

Mainz through on goal but the linesman raises his flag early for a clear offside
17:302 months ago

Mane has looked on form so far in the opening stages as he showcases his excellent pace running in-behind the Mainz defence.
17:282 months ago

Chance for Mainz as a lofted cross was controlled nicely by Paul Nebel but his shot hit James Milner in the opposition box and the midfielder was able to clear with ease.
17:262 months ago

Ibrahima Konaté showing his age a little as Mainz break down the right and instead of sitting deep, the Frenchman commited and found himself in no-mans land. Luckily nothing of note from the attack.
17:222 months ago

Liverpool have had all the ball in the opening stages of the game, predominantly down the right with Mohamed Salah and Harvey Elliot.
17:202 months ago

Joel Matip talking to LFCTV prior to kick-off

Joel Matip: "It's a good team we're playing against, we have to be prepared to give 100%. They can play and we have some tough weeks but this is a training camp, it's what it's for and we have to get adapted to circumstances and to the game." #awlive [lfctv] — Anfield Watch (@AnfieldWatch) July 23, 2021

The Senegalese international has been speaking to LFCTV this week and was brutally honest about his form last season.

“It was not my best season which I know. Like I always said, it can happen in football but I think it won’t be the same [next] season.

For sure, I am more ready, mentally, physically, everything, so I think it will be for myself an exciting season.”

There seems to be a want from the manager to see how Harvey Elliot shapes up in the midfield three and some LFC fans have noted it may be down to his lack of pace on the wing.

Harvey Elliot got the work rate and technical ability to play as an 8. Him on the wings would not make sense at all, due to his lack of pace.

Klopp spoke to LFCTV prior to kick-off

"Jota, just in case. He is here [for] one day. If we have to do something, a couple of minutes, he could probably play. Robbo did his lactate test today, from tomorrow on he can be a proper part of our training sessions."

The charismatic German managed Mainz for 7 seasons between the year 2001-08 and clearly, despite being away for such a long time, still has many friends at the club.

Looks as though Jurgen Klopp has gone with Harvey Elliot as part of the midfield three today.

Oxlade-Chamberlain given another opportunity to gain match experience in the false nine role.

Ben Davies not part of the #LFC squad today after returning home for a "personal matter". The defender's absence is not linked to a transfer and he is expected to return to Austria for the remainder of the camp. — David Lynch (@dmlynch) July 23, 2021

That's all for now but we will be back shortly before kick off with more pre-match build up, analysis and team news!
09:412 months ago

Liverpool last played Mainz in a 2016 friendly which saw Klopp's men lose 4-0 to the German side.

Trent Alexander-Arnold, Divock Origi and Joel Matip all started the game and all three are expected to start for the Reds today.

To watch every kick, the game is available exclusively to LFCTV and LFCTV GO in the UK.

For LIVE match updates online, you can watch it with us at VAVEL.com

Mainz have a 29-man squad at their disposal and will probably, much like their opponents, opt to field two different teams in either half.

As with most pre-season outings for the Reds, expect Klopp to make numerous changes at the interval.

Virgil van Dijk & Joe Gomez are not expcted to be risked for the game.

LFC are thought to line up in their usual 4-3-3 formation.

Liverpool face Athletic Bilbao and Osasuna a week after returning to their base in Kirkby. The two Spanish opponents will face the Reds in front of an expected sell-out.

After today's game against Jurgen Klopp's old team, the Reds will face another German opponent in the form of Hertha Berlin. The game, due to be played in the Tivoli Stadion Tirol, will be the last of the four pre-season games in Austria.
09:112 months ago

Despite being the Reds' third game of pre-season, it will be the first 90 minute clash of the season.

The first two games, both played on Tuesday, saw Klopp's team test themselves in the Austrian heat for an intense 30-minute outing.

Today's clash between Liverpool and Mainz 05 comes to you from the home of SV Grödig and FC Liefering, the Untersberg-Arena. The stadium is located in the city of Innsbruck in Grödig, Austria and is around half an hour from LFC's training base in Salzburg. 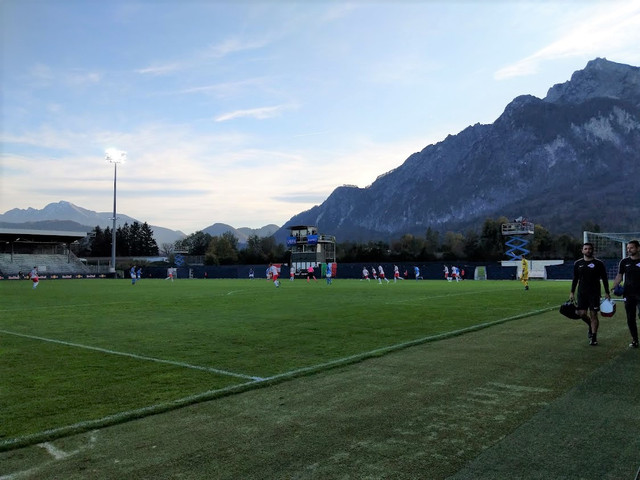 My name is Adam Doyle and I’ll be your live host for this game. We will provide you with pre-game analysis, score updates, and news as it happens live here on VAVEL.com

The Warmdown: Liverpool open their Champions League campaign with a win against AC Milan 3 days ago

Liverpool vs AC Milan preview: How to watch, kick-off time, predicted lineups, team news, officiating and ones to watch 4 days ago

Leeds United vs Liverpool preview: How to watch, kick-off time, team news, predicted lineups and ones to watch 8 days ago

Who will Liverpool face in the group stages of the Champions League? 24 days ago

Liverpool vs Burnley preview: Form guide, team news, recent meetings, predicted line ups, who and how to watch a month ago
//