Brighton & Hove Albion have opened their fifth Premier League season with a 2-1 victory over Burnley at Turf Moor.

James Tarkowski scored the opening goal of the match in the second minute for the Clarets before Neal Maupay leveled in the 73rd minute and Alexis Mac Allister won it five minutes later.

Following an early corner, Ashley Westwood sent in a cross that Tarkowski got his head to and he beat Brighton goalkeeper Robert Sanchez. After a check of VAR for possible infringement on Maupay, the goal stood.

On the half-hour mark, the hosts threatened again as Chris Wood broke forward just being inside and he laid it off for Jay Rodriguez, whose shot was straight at Sanchez.

The Seagulls 'keeper nearly made a calamitous error as he failed to deal with a chance that eventually led to Ben Mee hitting the crossbar with his shot.

Brighton had a couple of first-half chances thanks to headers by Shane Duffy, but his first was off-target and his second was straight at Clarets goalkeeper Nick Pope.

Burnley won a free-kick in the 49th minute that Johan Gudmundsson curled around the wall with his left foot, but the shot was just wide. The Clarets then had several corners in succession, but couldn't make anything of it.

After good spells of pressure in the second half, Brighton equalized. Yves Bissouma, subject of transfer rumors, strode down the center and found sub Jakub Moder down the right, his cross through defense's legs finding Maupay, who beat Pope.

In the 78th minute, the visitors granned a winner. From a diagonal cross, Pascal Gross found Mac Allister, who ran onto the ball and scored just a minute and 42 seconds after coming on.

In stoppage time, Moder collected the ball and raced towards goal, Pope getting his chest in the way. Gross collected the rebound, lifted it over the English international only to see Tarkowski clear at the last second.

The Seagulls then saw out the remainder of the game for just their second-ever victory on opening day while Burnley will rue the missed chances they had in the first 45 minutes.

Man of the match: Yves Bissouma

He showed why the likes of Liverpool and Tottenham Hotspur want him. The Frenchman dominated the midfield in the second half and showed his class on the ball. It's vital Brighton keep hold of him.

Arsenal’s decade of lousy transfer outgoings a day ago 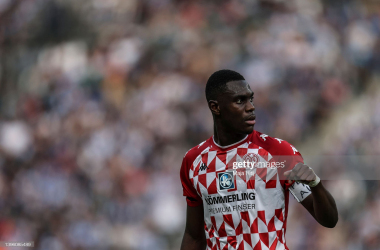