Cucho Hernandez's goal for Watford against Aston Villa on the opening day of the new Premier League season must have sent the stadium's decibel meter utterly berserk.

Less than a minute since his introduction as a substitute, the Colombian forward picked the ball up out wide and drove towards the penalty area. He taunted Villa's new signing Emi Buendia and evaded the Argentine effortlessly with a quick shimmy onto his favoured right foot, before unleashing a curling effort at goal, his target being the top right corner.

A pin drop could be heard as the ball flew goalwards. The noise as it clattered the far post was as clear and clean as any. But as the net finally bulged, you wouldn't even have been able to hear your own thoughts over the raucous pandemonium that Watford's third goal of the afternoon induced in the stands at Vicarage Road.

It was their first match in front of a full home crowd since their 3-0 dispatching of champions-elect Liverpool in late February 2020, and it could not have gone much better for the Hornets. Cucho's sublime strike came after two first-half goals from debutant forward Emmanuel Dennis and wing menace Ismaila Sarr, so it all but sealed victory on Watford's return to Premier League football after a year down in the Championship. The match ended 3-2 as the visitors clawed back goals through John McGinn and Danny Ings.

But, in the 17-and-a-half months between the Liverpool and Villa matches, Vicarage Road had been empty, fans kept away from the terraces to reduce the spread of Covid-19 in the UK.

In the final five home games of the 2019/20 season, in which Watford were eventually relegated, as well as all 23 of their Vicarage Road outings in the Championship promotion campaign, the Hornets were forced to ply their trade in front of no supporters whatsoever — not physically, at least.

Which only makes their home form over that period all the more remarkable.

They failed to win in just four of their home league assignments in 2020/21, thus emerging victorious from 19 out of 23 Vicarage Road outings, a record which supplied the foundations for their immediate return to the top flight. Having 59 points on the board from home matches alone ensured that an altogether average record in away games — eight wins, eight draws, seven losses — would suffice for automatic promotion.

Watford's practical invincibility on home turf was all the more crucial in the run-in towards the end of last season. Those nine consecutive home wins — which in turn buoyed the team to improve their form on the road — allowed the Hornets to keep pace with and eventually overtake their main rivals for automatic promotion, Brentford and Swansea City, putting them in the driving seat and generating such momentum that they never looked likely to fall away.

Fans look back at victories such as those over Reading and Millwall (that which mathematically secured promotion) as pivotal moments in dictating the club's fate and direction. Those were days when, in spite of the stadium being empty, Watford still found a way to make decisive use of their home advantage.

Somehow they had visibly summoned the energy of the fans even though they weren't there. Could this have been down to the motivational skills of the infectiously positive head coach Xisco Muñoz? Very possibly. But nonetheless, as the weeks and months without losing at home accumulated, the Hornets and their supporters believed more and more in their sense of invincibility at Vicarage Road.

Few would have predicted, or could have expected, Watford to carry this record on into the Premier League but, on Saturday, that's just what they did. The victory over Villa made it ten home league wins in a row, and by the time they face Wolverhampton Wanderers in their next Vicarage Road fixture on 11 September, it will have been seven months and ten days since they dropped points at their own ground. That is no mean feat.

It's clear that maintaining their positive home form will be crucial in Watford's bid to beat the drop this season. The top flight puts newly promoted sides through some pretty gruelling, ruthless away games — with the Etihad Stadium, Anfield, Old Trafford and Stamford Bridge to visit, among many others — but any opponent feels an awful lot more beatable in the comfort of warm, familiar surroundings.

Watford have a number of purely footballing assets that stand them in good stead this season: there's their defence, which last season was one of the best the Championship has ever witnessed, with just 30 goals conceded in the 46 matches; there's the frightening pace and guile of Sarr; and new signings such as Dennis, Juraj Kucka and Peter Etebo — all of whom registered superb debut showings on Saturday — as well as the yet-to-feature Imran Louza, Josh King and Danny Rose will surely all play crucial roles over the course of this nascent campaign.

But Watford's home form is now so impressive that it has become an equally tangible weapon, one that they must do their absolutely best to keep hold of at all costs if they are to survive.

And with fans back in the Vicarage Road stands, the Hornets will hope and believe they can do just that. 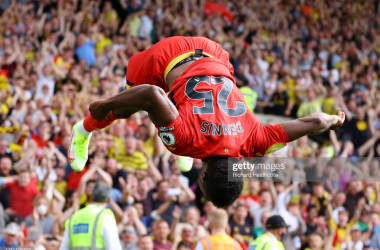 The Warm Down: Watford come alive at Norwich whilst hosts struggle again 7 days ago

Watford vs Wolves Preview: Views From Both Camps, Team News, Predicted Lineups, and Ones to Watch 18 days ago

The Warm Down: Positivity awaits but Watford must capitalise a month ago 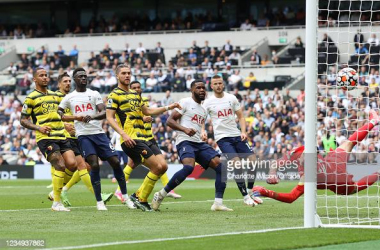 Spurs 1-0 Watford: Son free-kick the difference as Tottenham go top a month ago 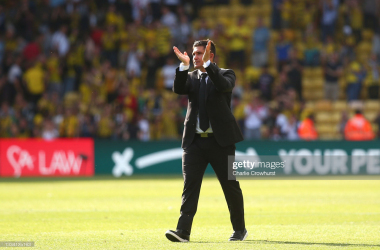 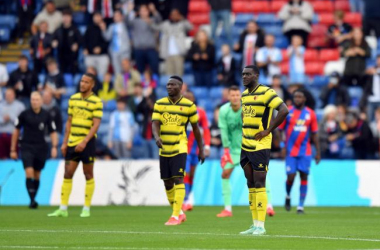