The Canaries faced a difficult task on Matchday One, facing Jürgen Klopp’s Liverpool in a game that resulted in a 3-0 defeat at Carrow Road. Despite the uphill battle, many positives can be taken as the games keep on coming, with Norwich City ready to turn their attention to the reigning Premier League champions: Manchester City.

The return to the holy grail of English football was marked with a defeat, however, the game provided league debuts to the likes of: Billy Gilmour; Milot Rashica, and Josh Sargent, with the American coming off the bench to feature in the green-and-yellow.

Despite the result, fans were in full voice and pride as they cheered their stars onto the pitch and throughout the 90 minutes, as the supporters take set to provide the squad with an extra push to help avoid relegation this season.

In a turn of attention to the opening game of the season, the goals came from Diogo Jota, Roberto Firmino, and Mohammed Salah as The Reds sealed all three points for the away side in the opening fixture, but the score does not tell the full story. Where mistakes and lapses in concentration ultimately punished the Premier League new boys, they did match the might and power of Liverpool in possession, sharing 50% between them. Additionally, the side managed to get 14 shots off on goal, but the concern came with only three of those shots ending up on target. In a look at Liverpool, half of their shots ended up on target, with eight of their 19 finding their way to Tim Krul’s goal. 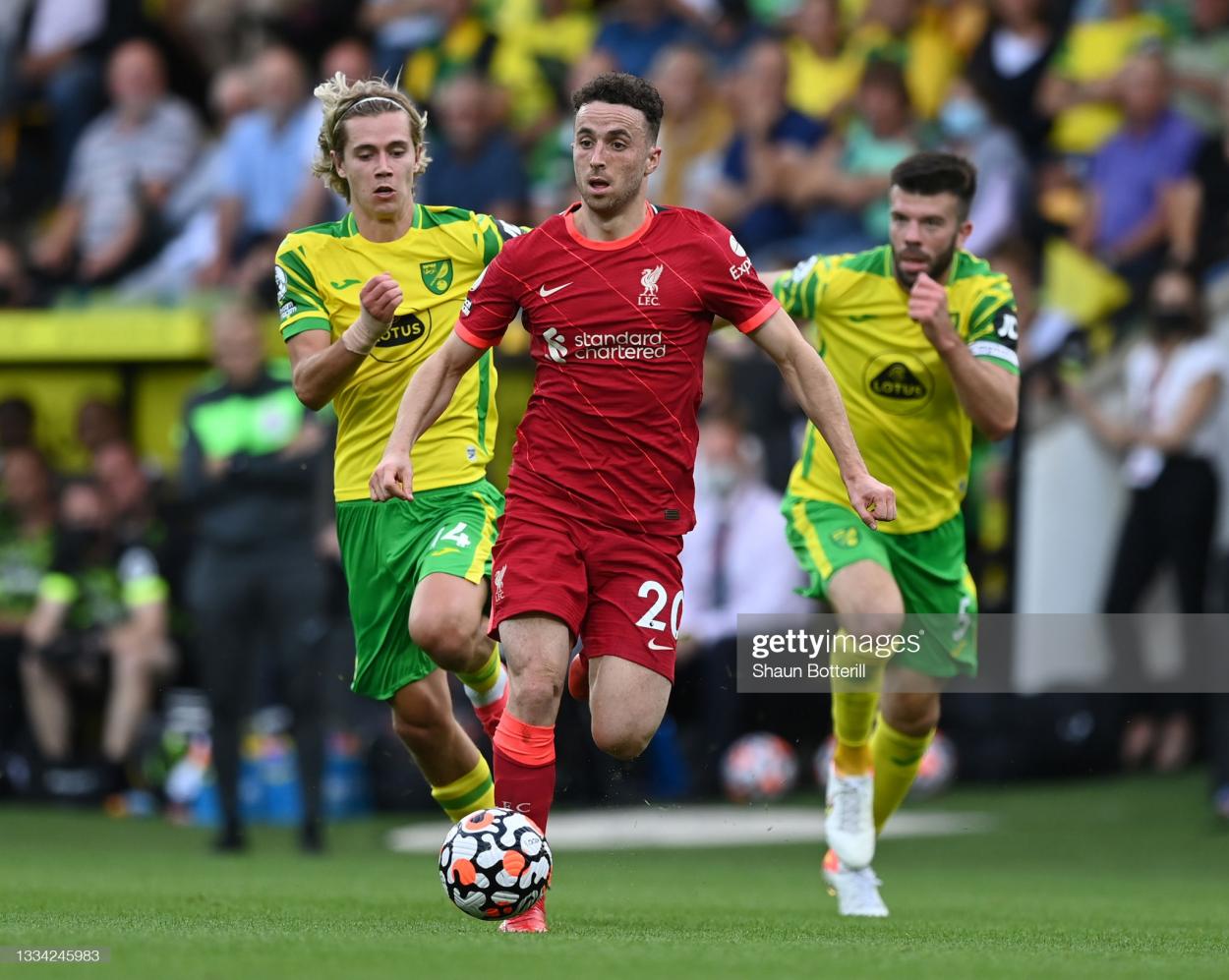 In a difficult run to begin the campaign, Norwich will hope to take confidence from the opening game. Promising first glances were available for the new signing: Josh Sargent, who looked lively, as the American provided an attacking edge that had been lacking prior to his arrival onto the scene. Likewise, Billy Gilmour remained confident with the ball at his feet, often directing traffic for The Canaries; a player who has been tested at the very highest level within his very early career, the loanee from Chelsea will be crucial to Norwich’s run in the Premier League, to stand a chance of avoiding the drop this season.

The reigning Premier League Champions were rampant and defiant on their way to winning the title last season; however, Pep Guardiola’s side began the defence of their title in defeat. A 1-0 loss to a Harry Kane-less Tottenham would go on to shock the league, as it had become the first time in ten years that The Citizens would lose an opening game of a domestic campaign.

Under a new regime, Nuno Espírito Santo inspired his side to a fourth consecutive victory over their light blue counterparts. Spurs were hard-hitting in their tackles, and fast in their counterattacks. A system that stopped the £100 million signings in Jack Grealish to have any major impact or momentum on his debut for the Machester club. 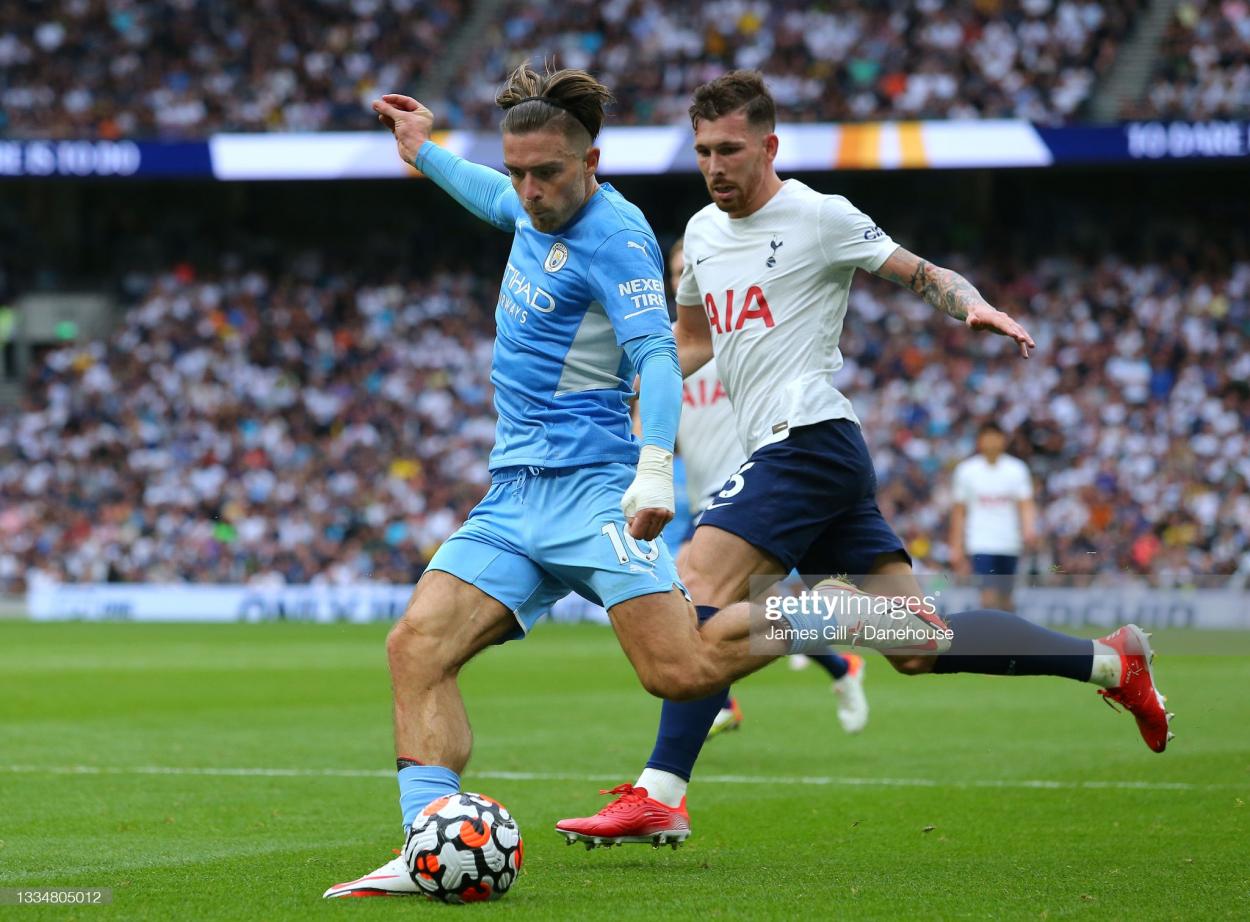 The opening game of the season played out as expected, City dominated possession, with 65.6%, but to no great avail. Their possession led to 18 shots, with just four landing on the goal of Hugo Lloris; in comparison to Spurs, who has 13 shots, with only one less shot on target during the game. A strong and compact defensive shape from Espírito Santo's men, highlighted by their 24 clearances throughout the game was fundamental in securing all three points to spoil the fun for the reigning champions.

A damming defeat for the Premier League champions, but without the likes of Kevin de Bruyne and Phil Foden, the club will turn their attention to welcome Norwich City to the Etihad Stadium, in their attempts to set the record straight.

The Last Time These Two Met?

In a disappointing campaign for Norwich City, the club faced the then runners-up of the Premier League to wave goodbye to the English top-flight. Relegation confirmed spirits were low as The Canaries suffered an emphatic 5-0 defeat to Manchester City.

The game will be remembered by fans in blues as it was the final time that supporters got to see the City legend David Silva feature in the colours of the club. A game won in style, soon-to-be Player of the Season: Kevin de Bruyne, would go on to bag a brace in the fixture. Adding to the scoresheet that day were Gabriel Jesus, Raheem Sterling, and Riyad Mahrez.

For The Canaries, the final game of the 2019/20 season was one to forget. That being in complete contrast to the reverse fixture within the same season. Flying high at the time, Norwich recorded their best win of the campaign, by beating Pep Guardiola's side in a 3-2 at Carrow Road. A game that would only elevate the status of both Todd Cantwell, and Teemu Pukki, whose chemistry and link-up play caused havoc for the defense of Man City.

The Warm Down: Daniel Farke sacked as Norwich pick up their first win of the season 23 days ago

Pre-match Analysis: Norwich City vs Leeds United a month ago

Norwich City v Watford: How to watch, kick-off time, team news, predicted lineups and ones to watch 2 months ago

The Warm Down: Playing from the back proved costly once again, despite the Canaries' efforts 3 months ago

The Warm Down: VAR heartbreak as the Canaries make costly errors in Foxes return 3 months ago
//