Brighton didn't just clinch a second victory in as many Premier League games against Watford on Saturday evening, they did so with vigour and struck with the veritable force of a hammer.

Right now, the club is brimming with optimism and rightly so; there were a plethora of elements that can serve fuel to a wealth of optimistic supporters ahead of what is shaping up to be an enthralling campaign.

The 2-0 win confirms Brighton have made the best start to a top-flight term in their history , with goals from Neal Maupay and Shane Duffy ensuring the home side left the AMEX with three points.

Yves Bissouma, so tenacious and elegant in his box-to-box duties, demonstrated why he has been pursued by the likes of prominent outfits such as Tottenham and Liverpool; the Seagulls will do well to keep a firm grasp on their focal point.

Watford were quite simply overpowered in the first half. Graham Potter's side were composed and assured, and pounced on their opponents to force errors and secure the result.

Last season, Duffy endured a hapless year in Scotland on loan with Celtic, but has offered a glimpse of a resounding resurgence after a magnificent start to the 21/22 campaign.

After ten minutes of play, it was indeed Duffy to leapt like a lion to drive Pascal Grob's corner off the underside of the bar with a sturdy header.

The remainder of the half was somewhat uninspiring, that is until Bissouma capitalised on calamitous Watford defending and intercepted and diverted the ball into Maupay's path, who subsequently unleashed a precise shot into the back of the net.

It was the question that had football fans scratching their heads last season; why did Brighton underperform it's expected output so heavily?

Statistical analysis and the incorporation of 'expected goals' - XG - demonstrates that Potter's side were often playing well and breeding chances, only to flounder in the decisive moment.

Statistical site Understat show that Brighton should have eclipsed the 39 goals scored last season with a return of 54.51.

So far this season, the South coast side have been far more clinical, and have hit the target 11 times across two matches, scoring four goals in the process.

The drastically improving output is, of course, at the maiden stage of the season, but indeed offers hope that Brighton can match impressive performances with goals as they strive for a record finish in the top-flight.

With Potter at the helm the club's senior figures will not only be confident in their prospects of remaining in the division, but improving on past years and climbing up the table.

The key to success is a sturdy defence, united attack, and a clear and profound tactical approach.

Lewis Dunk and Duffy have reignited a formidable partnership at the heart of the backline; whilst Bissouma serves as the engine, dictating the flow of there match with an intense work-rate.

Up front, Maupay sweeps up passing moves and will hope to maintain his revitalised clinical touch - the French forward has netted in both games thus far, he last achieved the feat in October 2020.

And of course, the orchestrator: Graham Potter. The English manager resides atop the division for the first time, bettered only by the goal difference of Liverpool and Chelsea.

An enticing season ahead awaits Seagull's supporters. There is a long way to go but Brighton have never been in a better position to repay the faith and achieve a top-half finish. Bold? Yes. But Potter has aspirations, and he intends to achieve them.

Trossard: "The more minutes I get, the better I can play" 5 days ago

Analysis: Will Brighton regain clinical edge in London? 9 days ago

Brighton & Hove Albion 0-2 Everton: Bissouma can't do it all himself 21 days ago 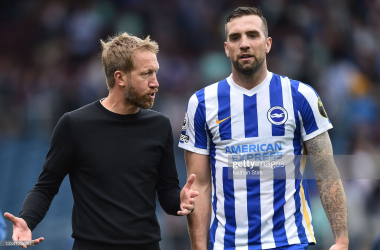