Following their midweek 6-0 demolition of West Bromwich Albion in the Carabao Cup, Mikel Arteta’s Arsenal side travel to the northwest this weekend to face Manchester City for this Saturday’s early kick-off.

The north London side head into this fixture having failed to pick up any points from their opening two games at Brentford and Chelsea.

The last time that Arsenal failed to pick up a single point from any of their opening three games was in the 1954-55 season, under the management of Tom Whittaker – the side went on to finish ninth in the first division that year.

Manchester City play hosts following a mixed bag of results in their opening Premier League games, having lost to Tottenham on the opening day, but bouncing back with a 5-0 victory over newly-promoted Norwich City last weekend.

Arsenal will be hoping to start captain Pierre-Emerick Aubameyang, with the striker coming off the back of a difficult 2020/21 season.

All the right signs are there for the Gabonese forward, with him putting in a match winning performance midweek, scoring the third hattrick of his Gunners career.

Kieran Tierney looks to be available for selection once again, having suffered from cramps during last week’s loss to Chelsea at the Emirates.

New signing Ben White is being continually monitored following his positive COVID-19 test, but Gunners fans will be hoping they won’t have to wait too long to see their 50 million pound man take to the field again.

The Gunners options at centre-back remain scarce, with left-footed Brazilian Gabriel also on the road to recovery from a knee injury – he started for the U23s fixture against Spurs this afternoon.

As for the hosts, Man City will have to do without Phil Foden, who has been suffering with a foot injury since the European Championships.

Star man Kevin De Bruyne is also a doubt for this weekend, with the Belgian not being selected for the national side in the most recent squads, question marks remain around his injury’s status.

While the results on the pitch may not reflect what Gunners fans have been itching for, one shining light from the advent of this new season has been the addition of Albert-Sambi Lokonga from Anderlecht.

Clearly a very classy footballer, Lokonga has shown the Arsenal faithful glimpses of what he is capable of.

Comfortable on the ball, quick, strong and assertive, the Belgian has been a welcome acquisition for the north London side – the Manchester City fixture is a great opportunity for the young midfielder to show that he is capable of competing at the very highest level. 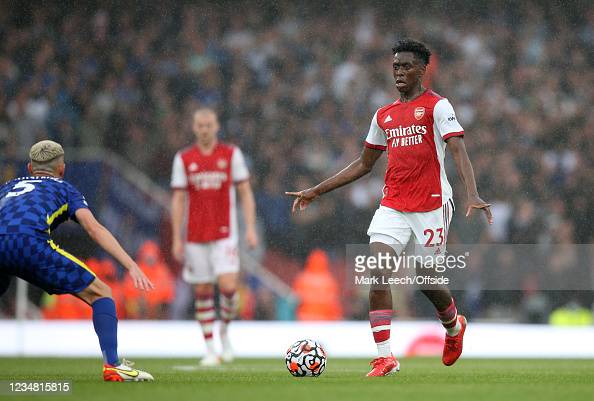 Martin Odegaard is also one to look out for, as he could make his first Premier League appearance since re-signing for the Gunners merely a week ago.

As Arteta puts it, the Norweigan brings “something different” to Arsenal’s midfield, something of which City coach Pep Guardiola will be well aware.

Man City fans will be looking to new signing Jack Grealish to put in a match-winning performance, following his first goal for the Sky Blues against Norwich last weekend.

The English playmaker gave the Arsenal defence a torrid time when playing for Aston Villa last season, so the Gunners will have to be on high alert to stop Grealish in his creative tracks.

It would be fair to say that Arsenal have had a difficult time against the blue side of Manchester in the last few years.

The last time the two sides met at the Emirates, a Raheem Sterling header was the difference in a tightly-contested fixture.

Arsenal have not gotten the better of City since their 2-0 victory in the FA Cup semi-final in July 2020, when Arteta’s side were on the way to picking up their most recent piece of significant silverware – so the Gunners will be looking to somewhat break the narrative of previous meetings by putting in a strong performance.

The game will be available to watch live on BT Sport, with the coverage starting at 12:00 for the 12:30 kick-off.

Arsenal v AFC Wimbledon, a chance for youth to shine a day ago

Charlie Patino: The next Arsenal youngster tipped to break into Mikel Arteta's first team 8 days ago

The Warm Down: Arsenal 1-0 Norwich City 12 days ago

Arsenal vs Norwich preview: Can the Gunners finally get some points on the board? 13 days ago

The Warmdown: Arsenal gain confidence booster as Gunners slot six past West Brom a month ago

West Brom vs Arsenal preview: Can Arsenal grow confidence in Carabao Cup? a month ago