The Surrey-born central midfielder is now 26 and vastly experienced, having played ten years of professional football in the Championship for both the Hornets and his boyhood Derby County - where he made his professional debut ten years ago aged just 16. Hughes became a regular fixture in midfield in that 2011/12 season, having graduated as Scholar of the Year in his previous campaign in the East Midlands.

It isn’t just the second tier of English football he has shown his worth in, however, having also made 77 Premier League appearances across three seasons from 2017-2020 during his time with Watford. This reliability and Premier League experience will no doubt be a huge asset to a Palace side who have been dealt their fair share of injury woes in recent seasons.

What sort of player is Hughes, and where will he fit in at Palace?

Hughes is an all-action, combative modern-day central midfielder who possesses great stamina; he battles tirelessly and is a constant presence who is always available in the middle of the park. On the ball, the former Derby man is elegant and stylish, preferring to keep it simple and retain possession, but is more than capable of producing moments of real quality and magic with his preferred left foot.

For the majority of his Watford career, Hughes has operated in a midfield three. This was also the case last season under the most recent Hornet’s manager Xisco. This will translate well to his new role under Vieira at Palace, with the Frenchman preferring a standard 4-3-3 in all of his matches as Palace boss so far.

Hughes’ statistics, and how they compare to the current crop

During Hughes’ last season in the Premier League (2019/2020), the Englishman put up some very impressive numbers despite the Hornets’ eventual relegation. These statistics are placed in context with the average statistic for Crystal Palace midfielders that season.

These numbers are incredibly encouraging for Palace fans and clearly show that Hughes will be an upgrade both with and without the ball. Included below are Hughes’ defensive numbers from that same 19/20 Premier League season in which he clocked an impressive 2252 minutes, taken from FBref [fbref.com] and displayed in terms of what percentile that statistic was in comparison to other Premier League players of his position, central midfield - 96th meaning Hughes is in the top 4% for that metric for example. 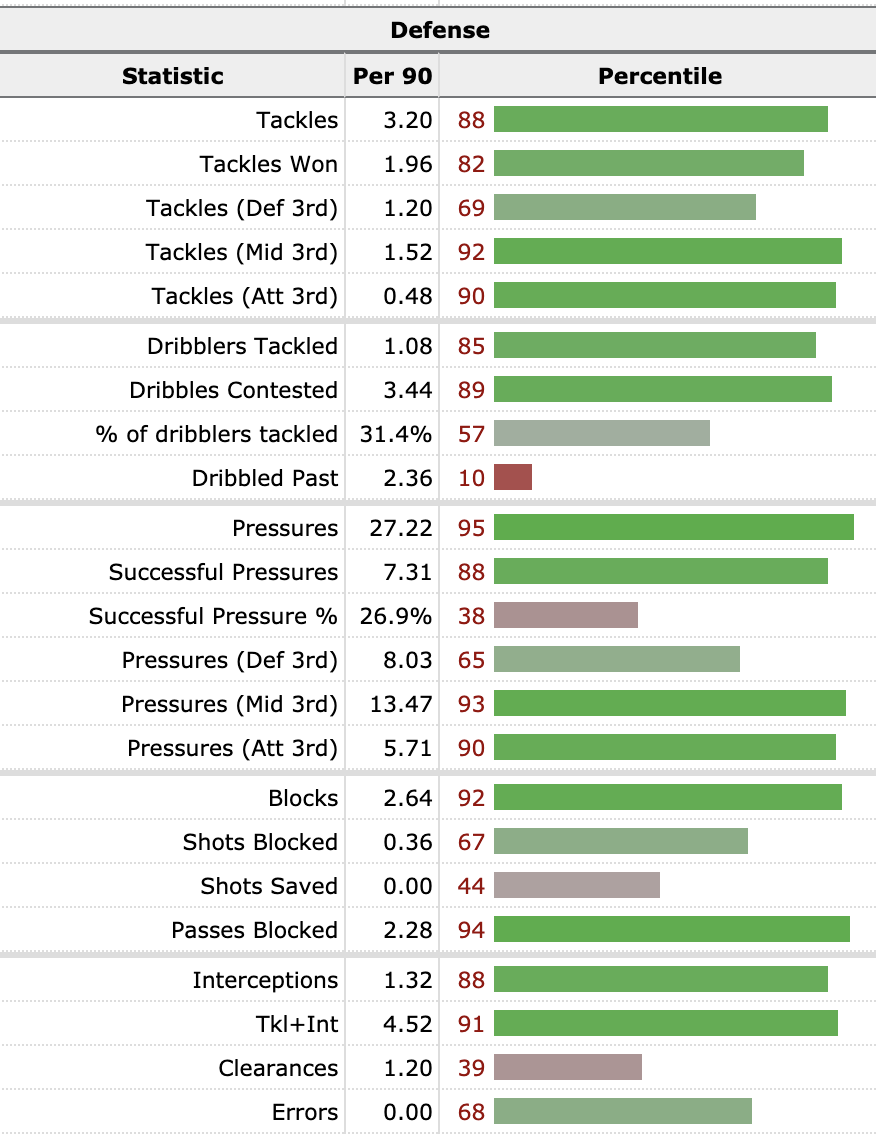 How does Hughes’ style compare to the current midfield roster?

The former Watford man offers something a little different to Palace’s other midfielders and a nice balance between some of their current options. He is perhaps most akin to Jaïro Riedewald - both like to keep it simple and are both left-footed, but Hughes is arguably more of a goal threat than the Dutchman but less prone to uses his physicality to dribble past his opponent.

Hughes is also similar to Milivojević in more ways than one, with them both sharing great ability in dead ball set-piece situations. Hughes, whilst more defensively reliable than new boy Gallagher and the incredibly dynamic Jeffery Schlupp, the Rams academy graduate provides better ball progression as well as more of a goal threat than somebody like James McArthur or Chekiou Kouyaté, who has been functioning in the backline more recently due to his defensive capabilities.

It’s hard to know whether or not Hughes will arrive in South London as an immediate starter, with central midfield an already competitive position and the likes of club captain Luka Milivojević still to come back into the fray. However, what is clear is that, along with Chelsea loanee Conor Gallagher, who stole the headlines in Palace’s London Derby against West Ham on the weekend, Palace now have real depth in that area and an array of different options at Vieira’s disposal; something that has been missing in recent years.

Transfermarkt had Hughes valued at £16.2m 18 months ago when he was last playing in the Premier League with Watford. So for the rumoured £6.3m transfer fee, the Eagles could have themselves one of the bargains of the summer and a quality addition for seasons to come.

Patrick Vieira’s homecoming: Crystal Palace boss faces off against the club where it all began a day ago

Christian Benteke vs Odsonne Edouard: Who should start vs Brighton? 22 days ago

Liverpool vs Crystal Palace preview: How to watch, kick-off time, team news and predicted lineups. a month ago

Last Time Out: Liverpool 2-0 Crystal Palace a month ago