Thanks for joining us today for our coverage and be sure to check out our post-match analysis.

"We have scored 16 goals in our last three games here. I ask the people to come . We need the people on Saturday at 3pm versus Southampton because we will be tired. "
22:198 days ago

Onto the next one!

City host Southampton at 3pm on Saturday in the Premier League but their next European outing will be a trip to Paris in two weeks time.
22:048 days ago

Get your City fix here!

Stay with us for post-match quotes and be sure to check out our warm-down piece in the aftermatch of the game.
22:008 days ago

City hit Leipzig for six on another entertaining night at the Etihad. A better game in the second half. Much more free-flowing despite the fact there were four goals scored in the first half.
21:538 days ago

Tremendous workrate from Fernandinho since has came on wins it back and releases Mahrez but he shoots straight at Gulasci.
21:508 days ago

There will be four minutes added on at the end of this game.
21:478 days ago

The goal stands. Gabriel Jesus scores on his 200th Manchester City appearance. He pounced on the loose ball in the area and smashed it into the roof of the net.
21:458 days ago

Gabriel Jesus is on for Jack Grelaish who enjoyed a memorable Champions League debut with a goal and an assist.

Meanwhile, Leipzig introduce Josko Gvardiol for Nkunku who became the first man to score a hat-trick for Leipzig in the Champions League. It could well all be in vein however.

Angelino receives a second yellow card and he's off. Not the return to the Etihad he would have hoped for.
21:358 days ago

Fabulous goal from perhaps the man of the match Joao Cancelo who again nudges City two in front.
21:348 days ago

Another twist in the tale, it's a hat-trick for Nkunku as he rifles past Ederson from an acute angle.
21:328 days ago

73' Substitution for the visitors

On comes Brian Brobbey to replace Dani Olmo for Leipzig.
21:318 days ago

Kevin De Bruyne and Ferran Torres are off for the returning Phil Foden and Raheem Sterling
21:268 days ago

Cancelo splits the defence with a brilliant ball. Good feet from Torres who cooly converts but the flag is up again! Marginal call!
21:218 days ago

A superb goal from the £100 million man who threatened when he cut in from the left in the first half. Grealish curls a beautiful effort into the top corner after swanning his way into the area.

City break and KDB goes close but his effort flashes by the post.
21:118 days ago

Olmo lifts the ball into Nkunku who scores another header for his second of the night.

Referee shows Tyler Adams a yellow for his late tackle on Jack Grealish.
21:058 days ago

Back underway at the Etihad. Just to confirm, Klostermann received a yellow card for his handball that led to the City penalty.
20:598 days ago

Stay with us as we near the beginning of the second period
20:548 days ago

City have been threatening without creating too much themselves. 59% to 41% possession in favour of the hosts but Leipzig have controlled the ball well at times. Just the final ball lacking.
20:528 days ago

It's a game that has ebbed and flowed. Despite four goals, it hasn't been that easy watched. Late offside calls and plenty of free-kicks awarded out the pitch haven't helped the rhythm of the game. Leipzig have created little but were growing into the game and got their reward before the City penalty.
20:508 days ago

Handball from Klostermann is reviewed by the referee at the pitchside monitor and he points to the spot.
20:458 days ago

Forsberg stands the ball to the back post. Mukiele heads it back across the box and Nkunku diverts it into the net.
20:448 days ago

Comes to nothing. Leipzig have faled to create anything clear cut barring Nkunku's earlier effort.
20:408 days ago

Aneglino can't spot any of his Leipzig teammates with his cutback but does win a corner.
20:388 days ago

Grealsih stings the palms of Gulasci as he drifts in from the left. Late flag again rendering the winger offside.

The late offside calls are becoming increasingly frustrating. Can hear the collective moans around the Etihad.

Andre Silva stabs the ball home but City's high line again catches Leipzig out and the striker is rightly deemed offside.
20:308 days ago

De Bruyne floats the ball in from the left, into the corridor of uncertainty and Leipzig defender Nordi Mukiele heads it into his own net.
20:298 days ago

KDB curls in the free but Ake can't quite reach it. City a threat from set plays with Leipzig opting for a zonal-marking approach.

Still no clean sheet for RB this season.

Fantastic first-time cross whipped in by De Bruyne. No one can reach it but Grealish is fouled outside the area as he retrieves the loose ball.
20:258 days ago

Neat exchange from Leizpig is almost rounded off by Nkunku but he can't direct his shot on target.

Great play from Grealish to KDB who slots the ball into Mahrez. The Algerian cuts inside but curls his effort wide.
20:188 days ago

A poewrful header from Nathan Ake. Unmarked he wanted it more than anyone else and rose highest to meet Jack Grealish's corner.
20:178 days ago

Angelino free-kick headed clear by Ake falls to Olmo but his shot sails over.
20:138 days ago

Torres bundled over in the box but a late flag for offside sees City's claims dismissed.
20:108 days ago

Nose bleed for Leipzig's Tyler Adams brings the game to a halt. Nothing of note so far apart from an early penalty shout for the visitors when Nkunku went down from Ake's challenge. Nothing given.
20:018 days ago

A predominantly dutch team in the middle tonight.

Teams are in the tunnel!

Both sets of players are preparing to take the field as kick-off approaches.
19:558 days ago

City will wear their home kit this evening, all sky blue, while Leizpig debut this season's third kit:

A mild night in Manchester

Eding closer to the start of City's journey in this season's Champions League with the Blues hoping to go one better than last year's final heartache
19:508 days ago

BT SPORT: I decide for these guys, of course Kyle could play and Raheem many players, Gabriel, and the guys who play these last three games, Ilkay for example, are so important for us but everyone has to start to be part of this group for this tough, tough and busy, busy schedule."
19:498 days ago

Pep confirms Stones and Laporte were injured while on international duty!

"John Stones is injured from the national team (England). The same like Laporte."
19:408 days ago

Quotes from Guardiola before the game coming soon...
19:268 days ago

The boys are in the building 🙌

A milestone for the boss tonight! 🙌

With Laporte out, Nathan Ake gets a start.

Cancelo switches over to the right while Zinchenko starts on the left with Kyle Walker dropping to the bench.

KDB comes in for Gundogan and Mahrez starts on the right in place of Jesus.

Die Roten Bullen manager Jesse Marsch makes three changes to the side who were beaten 4-1 by Bayern Munich on Saturday.

All three players move to the bench.

Ruben Dias captains the City side.

Kevin De Bruyne starts and Jack Grealish makes his UCL debut but no Aymeric Laporte or John Stones in the City squad tonight.

City line-up is in:

Your #UCL starting XI for tonight! 💪

Follow our live feed for team news as it arrives!
18:328 days ago

A nice matchday walk for our boys in Manchester 🚶‍♂️

What we can expect this evening

On a calm September night...

The line-ups for tonight's game will be confirmed shortly. Stay tuned for updates.
18:158 days ago

RB Leipzig manager Jesse Marsch has acknowledged that this will be his side's toughest game in the Champions League group stage and had this to say when speaking with Kicker:

"It should never be easy in the Champions League. PSG and Man City are certainly among the best teams in the world at the moment. That means the task will be very difficult.

"I have to say the toughest game is the first one in Manchester. I had hoped that we would face them later on because we are still in the middle of a process here."

Speaking at yesterday's pre-match press conference Guardiola said his side can use their 1-0 defeat to Chelsea in last season's final to their advantage:

"The players have feelings and soul and, you know, it hurts when you cannot achieve. For them it's a new challenge to try. These guys won three Premier League titles in the last four years and every year we have the feeling that we can do better."

Grealish in line for debut

Jack Grealish could make his debut in the UEFA Champions League tonight. 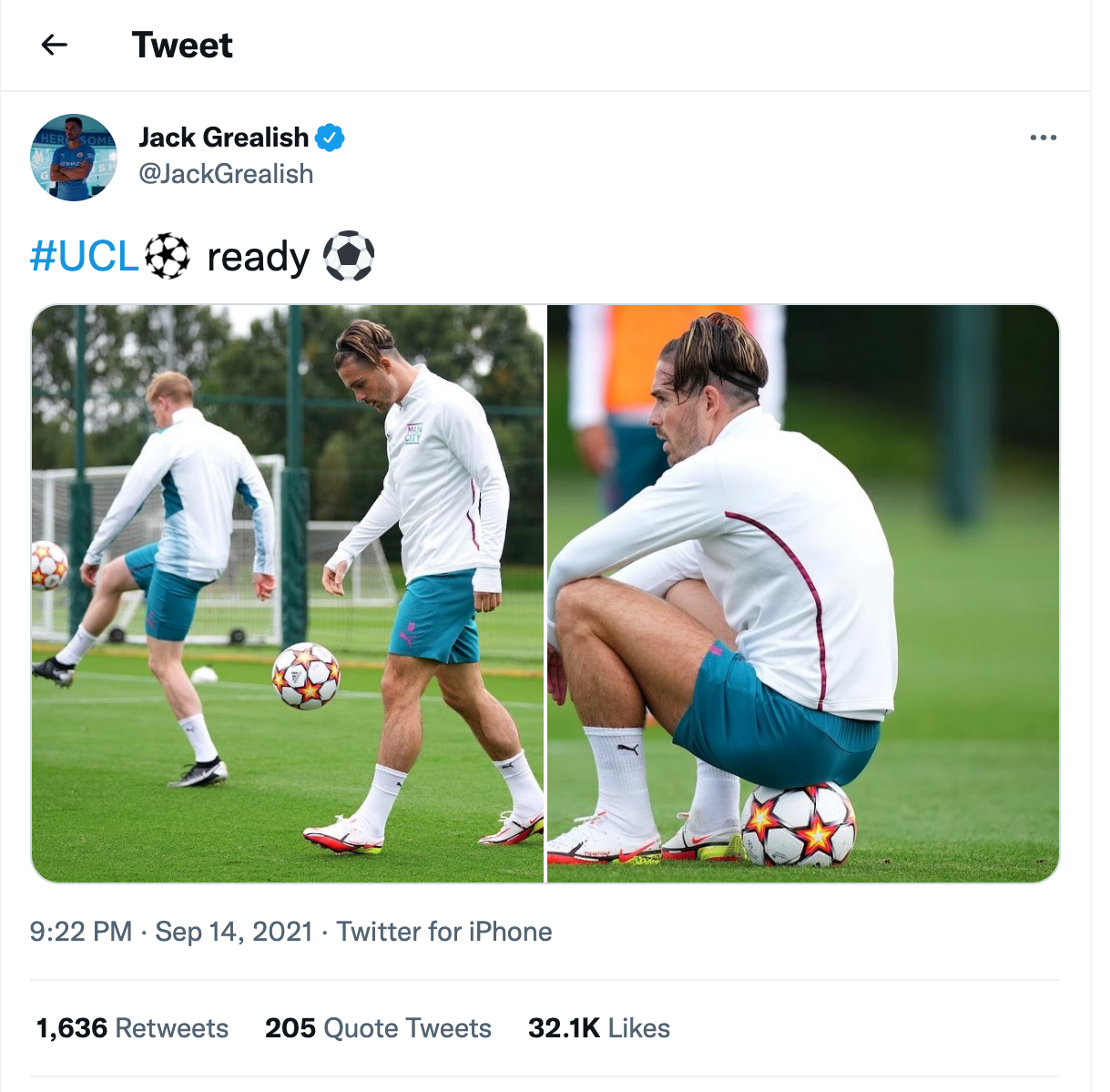 This game can be seen live on BT Sport 3 !

Marcelo Saracchi (knee) is out while Marcel Halstenberg is also a doubt with an ankle issue.
15:238 days ago

Kevin De Bruyne and Phil Foden could return to the City starting-XI after being unused substitutes in Saturday's 1-0 win over Leicester City.

We are less than five hours away from the first-ever meeting between Manchester City and RB Leipzig.

Where do they stand?

City have only lost one home group game in this competition since the 2015/16 season and are currently 5th in the Premier League having won each of their last three games.

Leipzig meanwhile, have staretd slowly and find themselves 12th in the Bundesliga. A 4-1 loss to Bayern Munich on Saturday was their third defeat in four matches.

Meanwhile, for RB Leipzig it is a second trip to Manchester in two years after facing Manchester United in last season's UCL group stage.

The German side finished runners up in their group last year - edging past Ole's side with a stunning 3-2 victory in GW6 - there has been plenty of change in Leipzig since then, and they know they'll need to be at their best to get a result here tonight.

Citizens looking to get off to a fast start

The Citizens will be looking to get off to a fast start in what looks to be one of the most difficult groups of this seasons campaign.

With a daunting trip to Paris in GW2, Pep will be eager to get three points on the board early.

Welcome to VAVEL.com's LIVE coverage of the 2021/22 Champions League Group A opener between Manchester City and RB Leipzig!My name is Niall Keenan and I'll be your host for this game. We will provide you with pre-game analysis, team updates, and news as it happens live here on VAVEL.

This tie will be played at the Etihad Stadium in Manchester, England with kick-off scheduled for 20:00 BST

The Warmdown: Saints defend religiously in 0-0 stalemate 4 days ago

The Warmdown: City bulldoze past Leipzig in 9-goal thriller 5 days ago

Can Manchester City Win The League Without A Striker? 25 days ago

The Warmdown: Manchester City show off their attacking arsenal against the Gunners 25 days ago

Manchester City vs Arsenal: Match Preview a month ago

Manchester City Youth: Ones To Watch a month ago