Manchester City's annual trip to the Emirates never tends to be the most positive of fixtures for those that follow The Arsenal. In recent years, the dominance of Pep Guardiola's side has been clear to see.

This dominance had never been as obvious as in game-week 3 of this season - when City hit five past a sorry looking Arsenal side.

But there was something slightly different about yesterday's fixture. For the first time in what seemed like forever, the Gunners took the game to the sky-blues, pressing high, displaying initiative, and for once, not looking completely terrified of being turned over by the Champions.

It's not often that you get to say that Arsenal truly did outplay Manchester City in periods of the game - but that is exactly what they did in the first half of yesterday's tie.

Leading up to the opener, the Gunners had a 10-minute spell of complete superiority, consistently pushing the City back line inside their own penalty area.

The goal came from familiar territory, as a neat piece of interplay in midfield released Kieran Tierney on the left-hand side. The Scot marauded forwards to find an arriving Bukayo Saka just inside the penalty area, who confidently struck the ball into the bottom right corner.

This was unfamiliar territory for The Arsenal, and you could tell from the reaction inside the stadium - complete pandemonium as the home fans found their team leading the Champions.

Most disappointingly for the hosts, they would have had a great chance to go ahead even earlier in the first period, had VAR been utilised correctly by the officials on the day.

Martin Odegaard was brought down on the edge of the six-yard box by City 'keeper Ederson, even more clearly shown in the slow motion replays.

But the original decision not to give the penalty stood, as the officials failed to advise an on-field review - as the game developed beyond this point, this would leave a rather sour taste in the mouths of the Arsenal faithful.

The second half was marred by inconsistency in the officiating of the game, as Bernardo Silva fell to the ground inside the Arsenal penalty area, following a challenge from Granit Xhaka.

The tackle was just as dubious as the incident in the first half, with referee Stuart Attwell initially waving for play to continue, but then to be advised to take a look at it on the pitch-side monitor - a different approach for very similar scenarios.

The penalty was given and subsequently dispatched by Riyad Mahrez, drawing the game level as we head into the final half an hour.

More drama was to come though, as Arsenal's Gabriel was shown a second yellow card just minutes after receiving his first.

The two cautions could have probably stood up as fair decisions, however in the context of the game, the Arsenal players seemed to feel there was a level of injustice to the decision, due to Manchester City players committing similar offences throughout the game without as much of a slap on the wrist.

With 10 men, the Gunners defended resolutely for 30 minutes, springing the odd counter-attack when the opportunity arose. But in predictable style, the Cityzens managed to find their winner well into injury time.

Rodri was the player to force the ball over the line, immediately running straight over to celebrate in front of the forlorn Arsenal supporters.

If there was ever a clear example of the progress Arsenal have made over the last few months, this was it. The Gunners may not have come out of the game winners this time round, but my word, have they become an entertaining team to watch.

Mikel Arteta has long been predicting his project to "explode" once he gets everything in order, and personally I believe that is exactly what we are starting to witness.

Finally, the football that Arsenal are playing makes sense. It is so clear to see that the system employed by the Spaniard, despite its flaws when mistakes are made, is an incredibly effective one.

So many of the Gunners goals from this season can be likened to one or two others scored in previous weeks. The blueprint has been set out, and the squad are really beginning to understand it.

Had Arteta's side held on to their lead in the second half, the performance of the players would almost undoubtedly go down as one of the best in the Emirates era.

The atmosphere around north London is a stark contrast to where it has been at any time in the last five or so years, there is real belief and real connection to this side, and long may it continue.

The fixtures don't get much easier for Arsenal over the next few weeks, as a trip to Nottingham Forest in the FA Cup is sandwiched between two-legs of the League Cup semi-final versus Liverpool.

The Arsenal's next game in the Premier League is a trip to Tottenham, where they will be hoping to recreate the performance that saw them hit three past their bitter rivals earlier on this campaign. 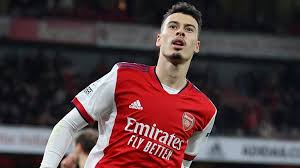