Wolves take on Arsenal at the Molineux in this next round of fixtures, a huge opportunity for the Gunners as teams around them drop points. Arsenal haven't played since their frustrating 0-0 draw with Burnley two weeks ago, while Wolves come into this off the back of a FA Cup exit to Norwich but are yet to lose in the league in 2022. Last season saw Arsenal lose twice to Wolves and this fixture also saw two red cards for Arsenal including that controversial David Luiz red card. 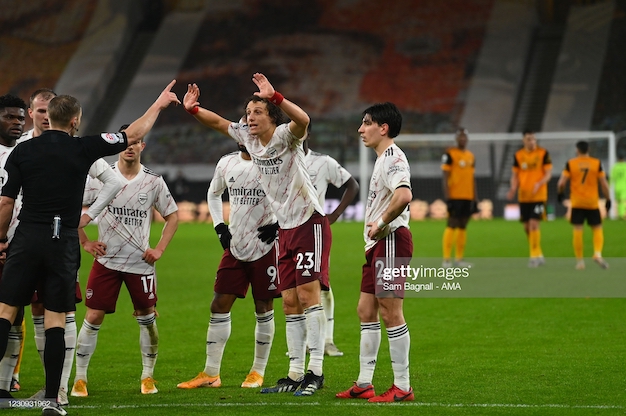 Arsenal are still searching for a prolific goal scorer, even more so now with the exit of Pierre Emerick Aubameyang, while Wolves saw Adama Traore head the same direction to Barcelona, this season has seen 13 different players hit the back of the net for Arsenal, with Emile Smith-Rowe their top goal scorer, the youngster is certainly a player expected to continue to shine the way he has as well as his Hale End partner Bukayo Saka. Wolves loss of Traore is certainly a blow to the team, a physical presence who could bully opponents, and as a winger with such strength he was able to draw a lot of fouls.

With Arsenal's current discipline issues this is a positive as its one less player to cause an issue in more than the goalscoring area, despite the fact that he had not been involved in any goals at all this season other than a goal against Southampton. There are certainly a lot of options at the Molineux to replace him on the right the most likely being Pedro Neto switching to the right side upon his return from injury and Daniel Podence on the left.

With Aubameyang's exit to Spain, the responsibility of leading the team from the front leads to French national Alexandre Lacazette, with five goals and four assists and a 61% conversion rate this season, he is more than capable of doing so and with not much time remaining on his contract, he will be looking to either earn a new one or impress potential suitors for when his deal expires.

A poor start to the year.

January was a poor month for Arteta's side, three out of the five games they played were with 10 men, Granit Xhaka and Thomas Partey saw red in each leg of the EFL Cup semi-final with Liverpool, in fact since the Spaniard's first game in charge a total of 14 players have seen red for the club. Wolves however had quite the opposite January seeing them lose only once to Norwich in the FA Cup and taking maximum points in the league, they'll be tough opposition having tested teams such as Liverpool and Chelsea already this campaign.

Xhaka and Partey both return from their suspensions for this fixture but are they likely to feature? They are both key players and this is something you would not normally see factor a managers decision after a lack of discipline which was displayed. Both are most likely to start together given the midfield crisis Arteta finds himself in, as this pairing is actually one seen very rarely, they have only started seven games together this season but only lost two of those fixtures. Another option returns  in Mohamed Elneny, the Egyptian was on AFCON duty and finished runner up as Senegal defeated his side on penalties, he was named in the team of the tournament, which has certainly put his name in contention for a starting spot.

Japanese international Takehiro Tomiyasu returned to training also but is still uncertain for this fixture, despite being a must win fixture for the side, manager Mikel Arteta may not want to risk him but his back up choice Cédric Soares is also returning from injury, one option that may be seen is Ben White shuffled across to right-back and Rob Holding partner in the centre with Gabriel, White has already been seen playing out on the right this season so it could be seen again, however if this is to be the case, its an easy target for Wolves to exploit with their young star Daniel Podence out left and White would be the preferred partner to Gabriel with the threat of Raul Jimenez in the box.

It will be up to the front three to ask some serious questions of the Wolves defence, a team who this season have only conceded 16 goals, however there is not much answer from their attackers either having only scored 19 themselves, Arsenal have shown solid defensive work this year, Aaron Ramsdale having kept a number of clean sheets and putting Bernd Leno's future in doubt, the second red card in this fixture last year. Gabriel Martinelli will be no doubt a starting player following his prolific December and with the departure of Aubameyang, he will be staking his claim to the clubs iconic number 14.

Despite their positive month, Wolves wins come more frequently on the road rather than at home having only won 40% of their games played at the Molineux and one thing that will concern Bruno Lage is their failure to score in 60% of those fixtures, another 40% of those fixtures at home is losses, as well as their worrying average of 0.8 goals scored at home. These facts aside, they sit 8th in the league and could jump above Arsenal who are trying to stake their top four claim, with a real chance to do so with a win here.

This Wolves team will be positive about their chances however, with the visitors losing 50% of games on their travels, as well as conceding an average of 1.7 goals, however they are not shy of goals at all this season, averaging 1.5 goals in away games and their conversion rate is at its best on the road, at around 12%. Having drawn only three times this season, a win or a loss would seem the most likely result for either side. Regardless, this must win fixture could make or break their season, with teams around them dropping points, this is a real chance to put some pressure on the competition and gain some traction towards European football next season.

The Warmdown: Newcastle put a dagger through Arsenal hearts 8 days ago

Newcastle vs Arsenal preview: how to watch, kick-off time, team news, predicted line-ups and ones to watch 8 days ago

The Warmdown: Spurs better 10-man Arsenal in NLD 11 days ago

Analysis: Arsenal must stop the drop 12 days ago

Arsenal vs Leeds Match Preview How to watch, team news, kick-off time, predicted line-ups and ones to watch 17 days ago

The Warm Down: West Ham United 1-2 Arsenal 22 days ago