Arsenal once again snatched all three points from Wolves, beating them by two goals to one, in what was an utterly enthralling game at the Emirates Stadium last night.

With a late equaliser from substitute Nicolas Pepe, and a 95th minute winner made by captain Alexandre Lacazette, the Gunners took another huge step towards securing a Champions League place come the end of the season.

Manager Mikel Arteta came into this fixture knowing that a win would see them overtake West Ham in fifth, and put them just one point behind Manchester United in fourth - with two games in hand on Ralf Rangnick's side. This would surely see them as the 'mathematical favourites', if there is such a thing, to occupy that all-important CL spot.

This was by no means an easy win for the hosts, as in just the third minute, a loose pass from Gabriel was pounced upon by Hwang Hee-Chan, who rounded Aaron Ramsdale in the Arsenal goal and finished comfortably from a tight angle.

Prior to this fixture, the Gunners had lost every Premier League game  this season in which they had conceded first, but with the opener coming so early this time round, the hosts would have plenty of time to work their way back into the game - and boy, did they need plenty of time.

The home side were shut out by Wolves for large portions of the game, as Bruno Lage's side set up shop to defend their lead rather than aim to build upon it - a tactic that has favoured them well through the majority of this season.

Through a mixture of time-wasting and defending in a low block, the visitors left Arteta's side visibly frustrated, a sentiment that was reflected in the stands, with the Arsenal faithful in full voice on the night.

The game was also marred by what was, shall we say, an interesting refereeing performance from Martin Atkinson. From an Arsenal perspective, it was another fixture in which they felt they were denied a clear penalty.

This time it was Gabriel Martinelli who was brought down in the opening seconds of the game, only for the officials to wave play on.

This is not to mention the number of small, individual, incorrect decisions made, such as whether it was to be a Wolves corner or Arsenal goal kick, or which way a throw-in should go.

Usually, one side would be much happier with the referee's performance than the other, but it feels in this case that both sides were let down by the standard of officiating on display. In spite of this, the game still managed to keep us all on the edge of our seat right until the very last second. 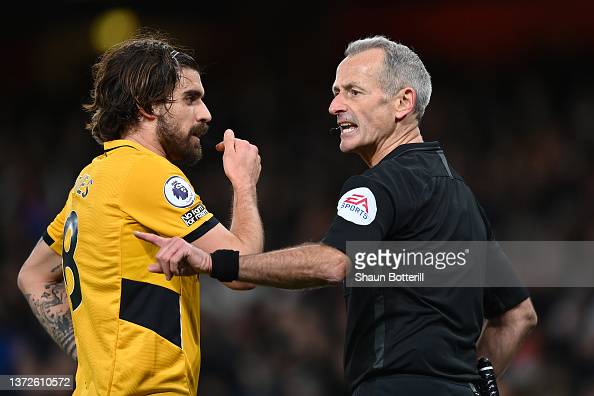 After battling through what was a tough 80 minutes, the Gunners finally found their breakthrough goal, as Martin Odegaard found the fresh-legged Eddie Nketiah in the right half-space, to lay the ball back to Pepe, who turned on a sixpence on the edge of the six-yard-box to lash the ball home and tie the game up.

With the wind in their sails, and ten minutes plus a fair chunk of added time left, Arteta's side went for the win. The chase for the second goal wasn't without its nervy moments, as Pedro Neto dragged a left-footed shot just wide of the post in the closing stages, following a quick counter-attack.

But it was to be Arsenal's day, as in the final minute of the game, Pepe slid the ball into Lacazette after some neat combination play on the edge of the box. The Frenchman lifted the ball just high enough to prove unsavable, as Jose Sa lightly pawed the ball into his own net, triggering pandemonium in north London.

Not only are these three points crucial to Arsenal's charge for Champions League football, the momentum a win like this can provide can be season-defining in these situations. The Gunners have to remain calm, but they are surely in the driving seat now in the race for the top four.

Next up for The Arsenal is a trip to Vicarage Lane to face Roy Hodgson's Watford side, who are battling it out at the bottom end of the table. A win would be another important step towards their goal, but no game at this stage of the season is a guaranteed win.

After that, it's back to the Emirates to host Leicester City, who are never an easy side to face. It is vital that the north London side manage to keep up the level of consistency that they have shown over the season if they are to find themselves where they want to be in May.

With sides dropping points around them, Mikel Arteta will be solely focussing on grinding out maximum points from every game until the end of this campaign.

Exclusive: Martin Odegaard to be named Arsenal captain 10 days ago