Form and past encounters.

Both of these sides enter this match in the top four and in fantastic form with five wins in their last five matches, the first time two teams will meet with this record since April 2009 where these two teams played out a 4-4 thriller at Anfield which included Andrei Arshavin's most memorable performance in an Arsenal shirt.

The two sides both prevailed again at the weekend in similar fashion, Liverpool overcoming a resilient Brighton & Hove Albion in the early kick off on Saturday while the Gunners were on top of a struggling Leicester City side at the Emirates on Sunday keeping yet another clean sheet.

This will be the third time the teams meet this season, with a two legged cup tie in the EFL Cup being the last time, Liverpool were the victors in that tie after a fantastic performance from Portuguese winger Diogo Jota scoring both goals in their 2-0 win at the Emirates to take them to the final, which they went on to win. The hosts will be confident however, in the first leg of that tie, they became the first team this season to stop the Reds from scoring at Anfield, despite the early red card from Granit Xhaka. The main concern will be the last time the two met in the league, after a poor start to the season but an increase in form, they travelled to Anfield, where they were subjected to a humiliating 4-0 defeat in a dominant Liverpool performance. Arsenal have not won against Liverpool since July 2020 and have gone even longer without a win at Anfield which last came in September 2012, without counting the League Cup shootout win in October 2020.

Disappointment in that tournament did not stop their momentum as they continued their winning ways in the league, the last team to stop them from taking all three points was Burnley in a frustrating 0-0 draw many feel was surrounded by controversial decisions.

Confidence is brewing at Arsenal with the team almost at a clean bill of health, with just Tomiyasu currently injured but not far off and could even make his return for this clash, he would be a welcome return for this fixture, but Cedric has soared in performances recently and has showed he deserves to be starting games. A performance here at one of the most difficult places to visit in the league from him could make a solid statement, especially if he is out to prove he is more than surplus to requirements as many deem him to be. Of course, the notable story in January was the discipline within the squad, both legs of the cup tie saw red cards for midfielders Granit Xhaka and Thomas Partey.

For Liverpool, the story is slightly different, they are still sweating over Mohamed Salah who was substituted against Brighton after scoring, seeming to have picked up a knock. The Egyptian international was notably absent from Liverpool training on Monday, Jürgen Klopp stated they were not concerned with the issue, but Salah went for tests to assess the extent of the damage still. Two more absences from the training session were James Milner and Kostas Tsimikas. Positive news for the Reds boss was the return of Ibrahima Konaté who missed the last two matches through injury.

Slightly different this time around, as there a number of stars in this game, there are plenty to choose from for both teams. For the visitors, the addition of Luis Diaz in January has given the squad a fresh face and he immediately burst onto the scene for them, his runs have been extremely dangerous and caused plenty of problems for opposition defences, but if there is any defence that can handle it, it would be Arsenal's. Since joining in January, Diaz has made five appearances scoring twice, he is yet to lose in a Liverpool shirt in the Premier League and he will not be planning to allow that to change anytime soon

Another cause for concern would be Diogo Jota if he were to start for the Reds, scoring both times in the cup and giving Tomiyasu a headache on the day, he loves a goal against the Gunners and would be hoping to add some more numbers to that record, but as Norwegian midfielder Martin Odegaard has said, and has been proven on the pitch also; this is a different Arsenal to the one that lost at Anfield earlier on in the season. The winger has enjoyed some very good performances against Arsenal in a Liverpool shirt scoring six goals since 2020 as well as scoring against them once for Wolves in four appearances against them.

For the hosts, Aaron Ramsdale could be the busiest person on the pitch on the evening but he is no stranger to a clean sheet this season or a spectacular save as we saw against Leicester on Sunday. The English keeper has kept 12 clean sheets in his 23 appearances this season and has put his name on many fans lists for the World Cup later on this year and the top of his game here could improve his chances.

Martin Odegaard ran the show at the weekend against Leicester, he created a number of chances, in the first half he achieved a new season high for this statistic in the first half of a game creating five, he also set a new season joint record of six chances created in a game by an Arsenal player. His passing game was a joy to behold, in fact, as was most of the teams, as fans cheered their dominant possessive performance of the ball every time they moved it around the pitch. 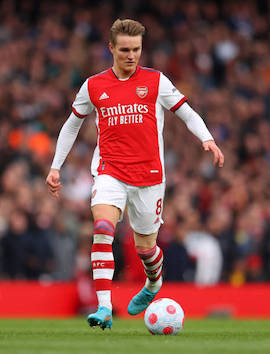 LONDON, ENGLAND - MARCH 13: Martin Odegaard of Arsenal during the Premier League match between Arsenal and Leicester City at Emirates Stadium on March 13, 2022 in London, England. (Photo by Catherine Ivill/Getty Images)

Another televised fixture coming up with this being rescheduled due to the EFL Cup final, Arsenal vs Liverpool will be live on Sky Sports Premier League on Wednesday 16 March kicking off at 20:15 GMT.