Dagenham & Redbridge limped over the line for an ugly yet monumentally crucial three points at a floundering Eastleigh outfit unable to register a shot on target throughout a turgid affair under the Silverlake Stadium floodlights.

Paul McCallum bagged his thirteenth goal of the season, almost half of which have come in the past month, with a decisive first-half poacher's effort but the evening could have been far more comfortable for the Daggers had Junior Morias not missed a penalty just prior to the hour-mark.

A nervous finale ensued whereby the Spitfires swung several probing crosses into the area, but their woeful form ultimately continued as the visitors held firm for a third consecutive away victory without conceding.

A drab opening quarter-hour set the tone for what would be a low-intensity clash punctuated by sporadic moments of quality.

Home defender Brennan Camp proved an unlikely source of danger, winning a corner that amounted to nothing before wastefully skewing into the side netting from a promising position at the far post moments later.

Dagenham slowly began to exert more control on the game, their first opportunity coming courtesy of Junior Morias' direct running towards a retreating defence. He sharply jinked inside before flashing narrowly wide of the post.

It proved an ominous let-off for the hosts because shortly afterwards they fell behind courtesy of a man with whom they are very well acquainted, namely former fans' favourite Paul McCallum, whose 27 goals from 42 games for the Spitfires in 2018/19 underlined a ruthlessness that would come back to bite them here.

Making his first start for the Daggers since late January, Ángelo Balanta demonstrated superb composure in capitalising upon Tom Broadbent's tame header, taking it into his stride before driving across goal for McCallum to clinically convert. 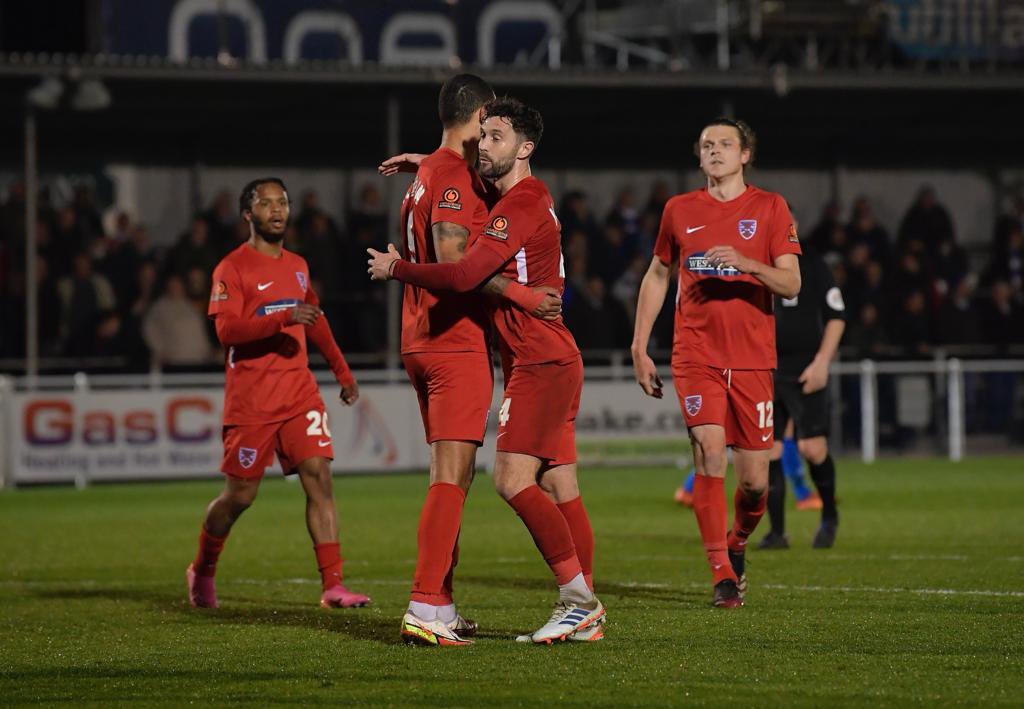 That was enough for them to be ahead by half time, and an enormous opportunity to consolidate the lead came when they won a penalty with 57 minutes on the clock due to Mauro Vilhete being dragged down as he raced into the area.

Up stepped Morias but Joe McDonnell in the Eastleigh net won the psychological battle, producing a strong hand to repel the effort from it's trajectory towards the right-hand side of the net. Though this may have been expected to have a debilitating effect on the Daggers, instead it seemingly only made them more defiant.

However, when substitute Mo Sagaf saw a one-on-one despairingly cleared off the line, it began to seem like they would have to get over the line the hard way.

So it proved, with Eastleigh launching several attacks before the end of the game albeit without troubling the visiting defence too much, as ferocious resilience helped Dagenham battle their way to an ugly yet hugely significant win.

Dagenham move to within three points of the play-offs ahead of a potentially season-defining fortnight in which they face play-off contenders Grimsby Town and Boreham Wood. Meanwhile, things don't get any easier for struggling Eastleigh, who welcome runaway leaders Stockport County this weekend.

Callum Reynolds (Dagenham & Redbridge) | Sensible in possession and made some vital headed clearances during the latter stages to preserve his side's slender advantage.

"Giving their all": Eddie Howe's post-Burnley quotes 19 hours ago

'We will use disappointment as motivation for European final,' says Klopp 18 hours ago

"It stays with you": Mike Jackson's post-Newcastle quotes 19 hours ago

Burnley 1-2 Newcastle: Wilson double relegates Burnley to the Championship a day ago