Football can be a cruel game. As Alejandro Garnacho swept the ball home in the 93rd minute to snatch a dramatic victory for Manchester United, several Fulham players could be seen crumpling to the turf in despair.

None would be more justified in their anguish than Joao Palhinha. The  midfielder has been hugely impressive for the Cottagers this season and was their best player here once again, winning an incredible 9 tackles - 50% of the team's total and the most of any player in a Premier League game this season.

Palhinha, a highly effective destroyer with a great engine, is exactly the kind of player Fulham have needed in recent seasons to beef up their  midfield. They faced little competition in the summer for his signature, which looks stranger with each passing week and dominant display from him.

With the Portuguese now taking his talents to the biggest stage of all at the World Cup, Fulham may well be fending off unwelcome interest come the January window.

Carlos Vinicius is not Mitrovic

How Fulham miss Aleksandar Mitrovic. Including this game, the Serb has missed three matches this season through injury and Fulham have not claimed a single point from any of them.

With an incredible 43 goals last season and 9 already this term, Mitrovic is the undisputed King of Craven Cottage, and their game understandably revolves around him.

Fulham are very good at working crossing positions in wide areas, and had a lot of joy yesterday down their left-hand side, with Willian and Tom Cairney frequently able to find space. Dan James' equaliser came from one such cross from the left.

This tactic is much more effective when you have one of the best headers of the ball in world football waiting in the box - but that's not not a description you would use for his stand-in, Carlos Vinicius.

Vinicius could only manage a team-low 26 touches of the ball in a tame display against United, and remains without a single goal this season. He has only scored 7 league goals since August 2020.

Fulham will be desperate for their leading man to return fit and healthy from the World Cup to show the understudy how it's done.

Garnacho cements status as the next big thing

Alejandro Garnacho has been billed as a future star for some time. Signed from Atletico Madrid in 2020, the 18 year old has been earning rave reviews for his performances in United's youth sides, and earned himself game time in the first team this season.

His two assists in the League Cup in midweek against Aston Villa were special, but young players doing well in that competition is not unusual. Scoring a last minute winner in a Premier League game, however, is different.

Garnacho is a confident, direct and skillful winger in the classic Manchester United mould. His goal showcased all these qualities as he somehow beat Bobby Decordova-Reid to a return pass from Christian Eriksen before finishing calmly inside the box.

The day was later tainted for United by the comments of Cristiano Ronaldo, a man who seems increasingly to be part of the club's past. Fans would be better off paying more attention to Garnacho - he looks like he is their future.

One player who struggled badly for the Red Devils was Tyrell Malacia. The Dutchman has been impressive this season since signing from Ajax but he is usually in his preferred position at left-back, not on the other flank as he was deployed against Fulham.

Getting little support from Anthony Elanga, Malacia was badly exposed on his unnatural side and the Fulham trio of Tom Cairney, Antonee Robinson and Willian were frequently able to find space down United's right - including for the equalising goal.

With Diogo Dalot injured and Aaron Wan-Bissaka completely out of favour, right-back continues to be a problem area at Old Trafford. They will be desperately disappointed that the signing of Wan-Bissaka has not worked out after spending a reported £45 million on him, but he does not appear to be at the technical level that Erik ten Hag demands.

This may well be a position United have to prioritise in January. 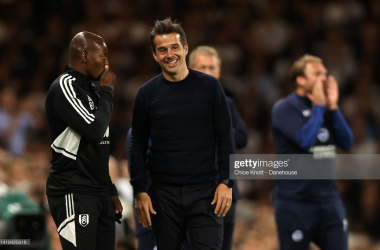 Who are the best wingers in Marco Silva’s Fulham team? 6 months ago