The writing was on the wall for Frank Lampard, but the words the Everton board should really heed are written large on the supporters’ banners.

Everton fans again protested against the owner Farhad Moshiri, chairman Bill Kenwright and the rest of the board after Saturday’s 2-0 loss at West Ham but it is Lampard who has paid with his job for the club’s alarming descent into the relegation zone.

The 44-year-old is now out of work after being the latest manager spat out of football’s impossible job. The highlight of Lampard’s tenure — just under one year in length — was undoubtedly the comeback victory over Crystal Palace last May which secured the club’s place in the Premier League.

But that evening of joy, which ended with Lampard dancing on top of a directors’ box, was an anomaly in a miserable and short reign.

Lampard lasted 38 league games across two seasons and yielded only nine victories and 35 points. However, Everton’s form this term has been of increasingly greater concern. There have been only three wins in the top flight, 15 goals and the haul of 15 points after 20 matches represents the worst tally in the club’s history.

With a tailspin ensuing and another relegation scrap to be fought, losses to Wolverhampton Wanderers, Brighton & Hove Albion, Southampton and, now, West Ham are the reason Lampard has been sent packing. Increasingly it has appeared that the former England midfielder has been unsure of the answer.

When Lampard took over last January, Everton were just above the relegation zone and desperate to expunge the experience of Rafael Benitez being manager for a little over six months. The subsequent 12 months have seen Everton’s level of performance hardly improve, and in recent weeks they have gone backwards. The manager’s job looks more difficult now than ever before.

That is partly due to the players at disposal. The club has spent £700 million since Moshiri’s reign started in 2016 but with little reward. One would be tempted to say that the need for funds is as pressing as ever, but then the trust in those who spend is virtually non-existent amongst supporters.

It was the sale of Richarlison to Tottenham Hotspur in the summer for £60 million that signalled a possible derailment. Everton were hardly prolific goalscorers before last season’s leading goalscorer was offloaded to meet the Premier League’s profit-and-sustainability rules. This term, their toothlessness in attack  has been stark.

Everton’s leading scorers in the league this season are Demarai Gray and Anthony Gordon, both with three. Dominic Calvert-Lewin, absent for large parts of last season, has started just eight league games this season and delivered one goal. Since scoring on his second start for the club in September, Neal Maupay is still waiting for his second goal.

Lampard got little from the ten players recruited under his watch. Kevin Thelwell, the director of football, oversees the transfers but he has been forced to rummage around the bargain basement for reinforcements.

However, the arrival of centre backs James Tarkowski and Conor Coady appeared to initially make Everton tougher to breakdown. In the early games of this season there were signs of improvement, albeit the team were some distance away from the front-footed style Lampard wanted them to possess, but that quickly unravelled.

Perhaps the concession of seven goals against Bournemouth across two games in league and League Cup during one week in November was a defensive nadir but, then again, shipping three goals in seven minutes to Brighton three weeks ago could lay claim too.

If any moment quite encapsulated the muddled thinking and fraught situation on the pitch that became a feature of Lampard’s last days then it was the final minutes of the 2-1 home defeat to Wolves on Boxing Day.

Having gone ahead early and been pegged back midway through the first-half, the game drifted until the latter period. After being ultra-conservative and attempting to defend a point, possibly on Lampard’s orders, Everton were urged to attack by the frustrated home crowd.

Looking almost petrified at not abiding by the fans’ wishes, Everton cack-handedly went for it only to be picked off by Wolves on the counter-attack in the 95th minute.

The clouded mind of many of Everton’s players has been plain to see. Lampard tried to install solidity by moving to a back five but that brought no lasting upturn, a catalogue of individual mistakes in matches compounded matters and resulted in the familiar sight of players lacking direction, drive and ambition.

In recent weeks, Lampard had called on his players — along with himself — to show ‘personal responsibility’ as the going has got tougher. The response has been meek. Before the West Ham game, Lampard said that he gave everything in the role, but Everton bore no resemblance to what he had wanted his side to be.

At the end of last season, Lampard explained how he hoped the team had turned a corner after their dicing with danger and laid out the plan to get them further along the path towards a happier future. He was after an outfit that were comfortable in possession, hunted down opponents and could think for themselves in the attacking third.

The sound of the past few weeks has been “You’re not fit to wear the shirt” and seemingly the wrong corner has been turned with Lampard clearly unable to steer them back around.

The flip-flopping between managerial styles highlights how a vision for the club has not been established during Moshiri’s ownership. The British-Iranian businessman bears the ultimate responsibility for that and is viewed as the sole cause of the distress and panic that now grips Everton by those in the upper echelons of the club.

There is little need for anyone else to accept responsibility when the narrative out there already is that Moshiri has shown flawed thinking, communicated poorly and been too easily swayed. One only has to take a look at the banners around Goodison Park at the moment. Whose fault is this? It is written large.

Everton must get next appointment right, but who is the best candidate? 8 days ago 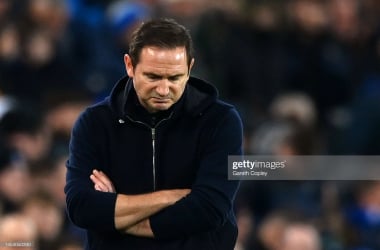