Two fantastic goals from James Rodriguez sent Colombia through to the quarter final stages of the World Cup for the first time in their history.

Colombia took the lead just before the 30 minute ark as James Rodriguez took down the ball on his chest before volleying right past Muslera, a piece of art that can be rightfully described as genius.

The hero of Colombia's fantastic World Cup doubled Tricolour's lead early on in the second half, finishing off a wonderful team goal involving Gutierrez, Armero, Cuadrado and the main man himself, James Rodriguez.

Jose Pekerman's side deserved to show their silky dance moves after an impressive performance all round from Colombia.

Pekerman returned to his favoured starting line-up with Rodriguez returning off the bench after being rested against Japan for the majority of the match.

Suarez was out of Uruguay's starting line-up for his bite on Georgio Chiellini leaving Cavani as the star man in a 'toothless' Uruguay side. 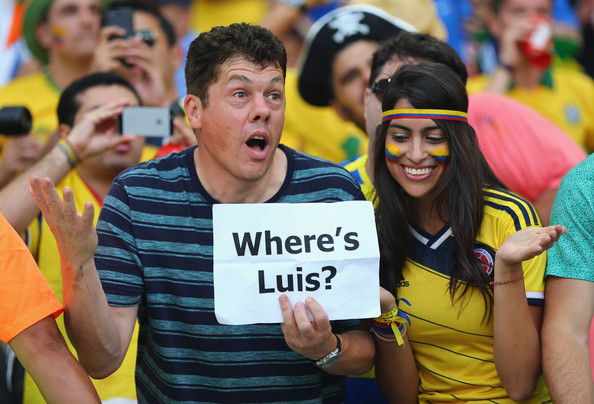 Juan Cuadrado penetrated a strong Uruguayan defence in the early stages of th game, but the Fiorentina man couldn't come to a conclusion which would please the crazy Colombians.

Colombia capitalised on a bright start and began to control the game, keeping hold of the ball well. In what was a fairly easy route to the Round of 16, Colombia needed not to keep possession and could counter at exhilarating speeds against Japan, Ivory Coast and Greece, but up against a resolute, defensive Uruguay side possession was needed. Los Cafeteros spent most of the time in the box with Uruguay's only threat coming from long balls upfield. 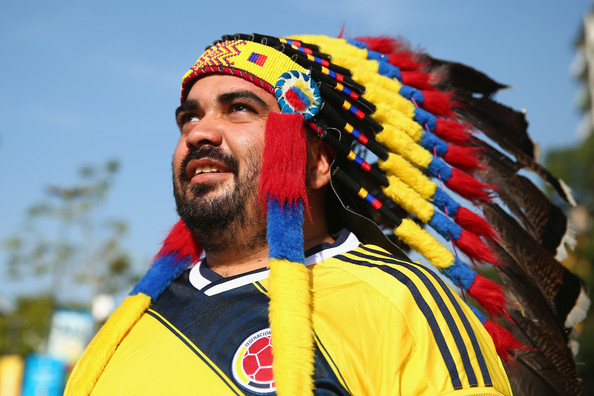 Edinson Cavani was sent deep into the box by a beautiful, floating ball from Diego Godin and shimmied away from his player but the PSG star failed to control it well enough.

James Rodriguez put a searching ball into a tall Colombian side from the corner and Jackson Martinez leapt above everyone else to match head to ball. Porto's main man didn't put enough power on it though and despite Zapata's best efforts to latch on to the loose ball, the Brazuca went out for a Uruguayan goal kick.

James Rodriguez scored what can only be described as an extraordinary goal. A high ball came down on top of him and a wonderful piece of chest control was eclipsed by a stunning volley which even the 6ft 2" Muslera had no chance of reaching. A sublime finish which only demonstrated further why every club in the World has been looking at him in recent weeks.

Uruguay came back with a positive response, winning a corner and a costlesskick and just a few minutes and beginning to release the two lines of four camped on their own penalty area into the attacking wilderness.

In contrast, Colombia certainly didn't change their game plan despite taking an early lead via a candidate for player of the tournament, James Rodriguez.

Tricolour continued their fast, flowing football but Uruguay's powerful attacks continued and limited the amount of players Colombia could chuck forward. The start of the game showed Uruguay's willingness to sit back and counter but the tables turned at around the 30 minute mark. The Colombians were far from content sitting back and continually tried to get the ball out of the box quickly but a very high pressing game from Uruguay halted their desperate attempts to return to their comfort zone.

The game took a slight breather before the half time whistle and neither side conducted the game to their liking in a slower paced period that missed any exciting chances.

James Rodriguez' heavenly finish was the clear highlight of a scrappy, yet entertaining first half. 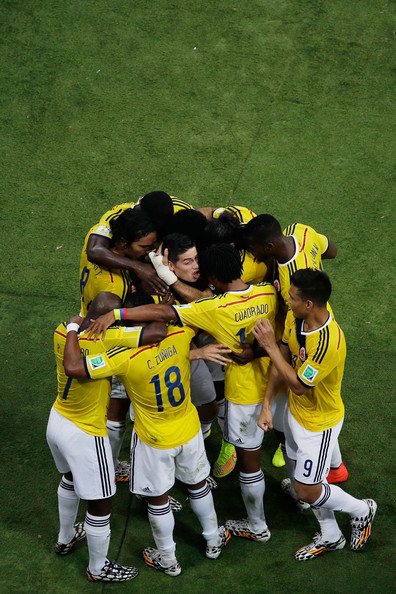 After a first goal of individual brilliance, a second goal scored by the same man came from a piece of unmatchable team brilliance. Gutierrez sent a clever ball across the field to Pablo Armero, who crossed a brilliant deep ball to Juan Cuadrado who unselfishly headed it backwards to Rodriguez who swept it in from a few yards out to complete a staggeringly good team goal.

Colombia gained even more confidence from their second goal and felt no need to send everyone back on the rare Uruguay attack. The swagger that was displayed in Group C from Colombia returned and Uruguay had no answer.

Two changes were made for Uruguay with Christian Stuani replaced Diego Forlan and Gaston Ramirez came on for Alvaro Periera as Oscar Tarbarez looked for the answer.

No answer appeared for Los Charrúas as Colombia continued to dominate proceedings. Cristian Rodriguez got a fantastic, stinging shot away but Ospina parried it to his left. Uruguay kept the ball in the final third for a small period of time but couldn't take advantage of it and remained two goals for the worse.

The only response to James Rodriguez was from Edinson Cavani and that was to step right on top of his foot.

The last throw of the dice for Uruguay was to chuck Palermo striker, Hernandez on for Lazio midfielder, Gonzalez which sent Jose Pekerman to play it safe, bringing Mejia - a defensive midfielder - on for Gutierrez - a striker.

The change for Colombia didn't see them sit further back though as Cuadrado ad Rodriguez kept the swift football going. 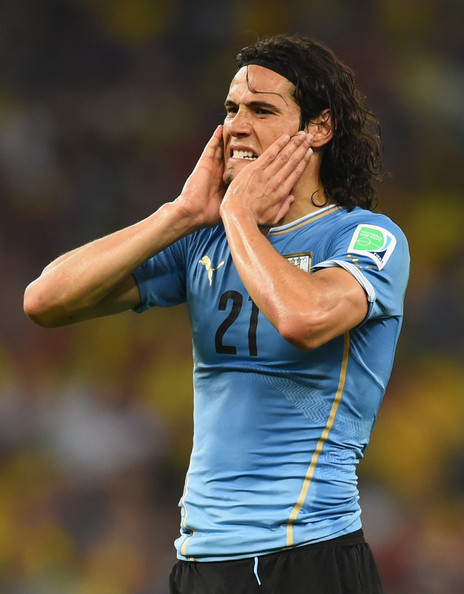 With no Suarez in the side, Cavani took the responsibility of lifting his team from the depths of the underground. He whipped a cross from the left to the far post for Stuai but the substitute couldn't keep it down, which was fair enough considering the height of the cross from Cavani.

Zuniga played well throughout the game and put the ball into the Uruguyan area with a cross to Jackson but the Porto man failed to get the ball under full control before missing. Colombia weren't far off another goal, a goal that would complete the victory.

With 10 minutes remaining, Cuadrado left the pith to a standing ovation from the Colombian fans, his replacement was Fredy Guarin who was expected to start the game after making his first appearance at the World Cup against Japan in the last group Stage game.

James Rodriguez also received a standing ovation for a fantastic performance topped off with two stunning goals, one of which is sure to be goal of the tournament and eclipsed everything else in the match.

Armero continued to power down the left flank and Guarin spotted him before sending him chasing a brilliant ball but Armero's cross for Martinez just wasn't up to scratch. 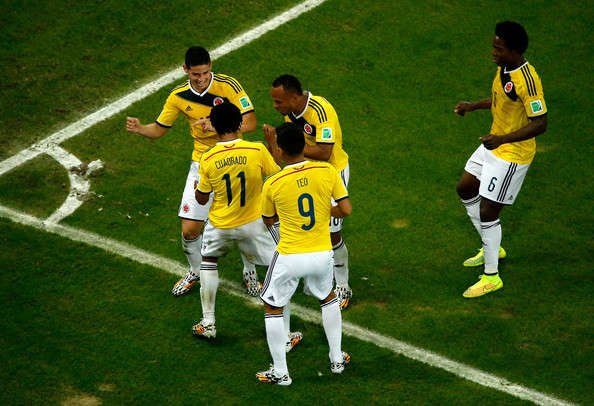 Colombia now face Brazil in Fortaleza on July 4th.They have now won all four of their games with James Rodriguez starring in a brilliant unit directed by Jose Pekerman. After 16 years of World Cup absence they have come back with a bang and will certainly challenge a less than impressive Brazil side. Pekerman's side managed to control the game in the final minutes which is an area of their game which has often been seen as a weakness. The so-called dark horses are quickly proving their worth and could knock out the hosts with a performance similar to Saturday's one.