Brazil confirmed their place in the FIFA World Cup semi-finals with a 2-1 victory over Group C winners, Colombia.

A very nervous end for the hosts, following an 80th minute penalty converted well by James Rodriguez, was overcome to give Brazil their first semi-final in the World Cup since 2002, when they won the tournament.

Thiago Silva gave Brazil an early lead after a shocking defensive lapse from Neymar's corner before David Luiz doubled that lead with a rocket costless kick in the second half.

James Rodriguez closed things up slightly with a late penalty but Colombia couldn't convert the many late chances they pushed for in the 5 minutes of added time.

Los Cafeteros enjoyed a great and unexpected run in Brazil but it is the hosts who will face Germany in the next round, the semi-final. The young Brazilian side are just two victories away from overall glory and the pressure mounting on Big Phil and his team is increasing by the day.

Both sides make two changes. Paulinho came in for the suspended Luiz Gustavo and Maicon for Dani Alves. Colombia brought Fredy Guarin and Victor Ibarbo in for Abel Aguilar and Jackson Martinez.

Colombia began the game exactly as they performed in the last four games, which all resulted in wins. They sprung down the left flank and whipped the ball in almost instantaneously after they kicked they game off in Fortaleza.

Rodriguez continued his wonderful form which had given him 5 goals in 4 games and found Gutierrez with a sublime ball. Brazil cleaned up in a less than impressive way before Fred clattered into Neymar, leading Sanchez to bundle over Fred near the box. Neymar couldn't produce a piece of magic for Brazil this time.

Colombia went behind for the first time in this World Cup after confirming pre-tournament worries about their defence. Neymar won a corner off Christian Zapata from which Colombia showed a complete lack of defensive quality. The ball sailed over the heads of David Luiz and Zapata before Carlos Sanchez missed it entirely so it could land at the feet of Thiago Silva who couldn't miss the chance to start off Brazil's home quarter final perfectly.

The exciting start continued as Colombia responded magnificently. Juan Cuadrado, who assisted Hamez' second goal against Uruguay, raced down the right hand side only to see his cross cleared. The Fiorentina man regained possession, cut inside and unleashed a powerful, stinging shot that's deflected just wide of Cesar's right post.

Ten minutes on from the goal and Brazil had another corner for Neymar to take. This time they couldn't convert it but Colombia humiliated themselves once more with numerous pieces of shambolic defending. Yepes headed it out but Hulk pounced on the loose ball before drilling a low cross along the six yard box to no prevail.

Colombia looked set to topple once more as Hulk burst down the left before a quick interchange with Neymar setting him up to strike one goalwards. Ospina easily parried it but only into the path of Oscar who's attempted loop shot was easily dealt with by Ospina.

No one took control of the game as both teams acted out football trench warfare, neither demonstrating the ability to push further forward than the other. Brazil showed the quality that burns throughout their team as they looked livelier in attack following a brief spell of Colombian determination caused by the conceded goal.

Marcelo whipped into a low pass directly into the Colombian box from his left hand side, giving his partner in crime of the left side, Hulk the ball. The Zenit man took a touch beefore hammering yet another shot goalwards. This time it tests Ospina to his full ability, a stunner of a low shot forcing the Nice keeper into a save matching the bullet shot. Ospina;s hand shot straight up in response to the drive, directing the ball right up into the air giving no one but Yepes a chance to get onto the ball.

After a ten minute spell of Cuadrado and Rodriguez excellence, the pair continued only to be shadowed out of the game by constant pressure from the hosts. The pair, who have to be looked upon as one of the more fantastic pairings of talent in football currently, attempted a little one-two that would have sent the latter into the area and give him to perfect goalscoring chance. It didn't quite come off and Brazil began once again.

Hulk continued a fantatsic performance with a world class dribble through the shaky Colombian defence before an appaling finish giving Ospina nothing much to do.

Half time brought an end to two teams from two coffee producing countires looking like they'd had four espressos each. A fantastic end to end first 45 minutes that Brazil showed more quality in and got a deserved goal.

Jose Pekerman got the fourth official up nice and early, bringing on Adrian Ramos for Ibarbo before the second half began. Ibarbo failed to make any impact except in defence where he gave Brazil space to penetrate.

David Luiz refused Cuadrado any chance to run down the flank, tripping him up late as he accelerated down the left but the ref wasn't having ahything but a costless kick.

Fernandinho instantly made his mark on Ramos, slightly nudging him as Ramos reached the byline. The referee, Velasco Carballo, kept his first half run of keeping the game flowing. Some would argue he was too lenient in not booking Fernandinho for numerous challenges, it seemed he was the injured schoolboy in charge of playground football, not the referee selected for the world's biggest sporting competition.

Fernandinho finally created something of his own that didn't merit a foul as he powered through the centre. Neymar directs the costless kick to Luiz who misses it as Zapata heads out but the officials give Colombia the goal kick. The deranged decisions in a slightly deranged game continued.

Rodriguez got his first chance to replicate his sublime goal against Uruguay as Pablo Armero scooped it backwards from the byline to Hamez. This time he layed it off to Gutierrez who hit it high and wide.

The referee finally remembered he had put his cars as he finally brought one out for Thiago Silva's clumsy charge into David Ospina as he tried to clear it. The card means the man with the armband who has led Brazil to glory so far will miss the semi-final on home soil.

Cuadrado got frustrated with the constant little nudges from the Brazilians and went in strongly on Neymar who toppled down like the Amazon rainforest.

Colombia finally got their goal in the 65th minute but it wasn't to be. Yepes converted a scrappy piece of play past Julio Cesar but long after the linesman had lifted his flag for offside.

James Rodriguez was kicked constantly all night as Brazil looked to completely take him out the game but it was he who was booked for 'dangerous play'. Hamez slid into Hulk, attempting to pull out before any damage came to the Zenit man but the referee felt differently from Rodriguez and he earned his first booking of the tournament while Brazil got a costless kick.

While it wasn't to be for 38-year-old Yepes, it was to be for David Luiz. A sensational costless-kick from Luiz went up and down in just over 20 yards. Ospina managed a hand to it but Luiz was celebrating almost as soon as he struck it. A simply wonderful goal sending Fortaleza and the rest of the nation in turn into extreme joy.

The Colombians felt strongly that Luiz' chance shouldn't have been made possible, and after a shocker of a game from the referee they had reason for their assumptions.

The old man of Colombia's side prevented a three goal gap with a brilliant sliding tackle to stop the young Brazilian star, Neymar.

Colombia counter attacked with exhilarating speed and finally felt a decision had gone their way as they earned a penalty for Cesar's take down on Rodriguez. 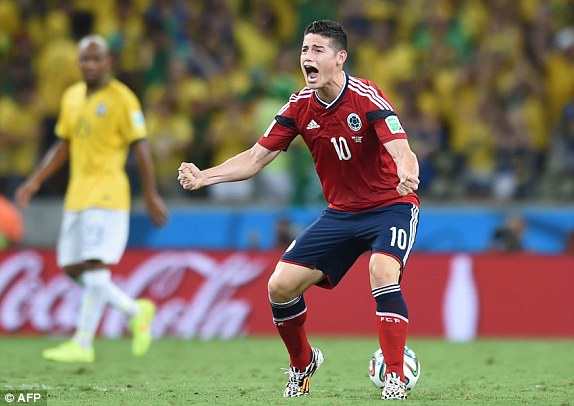 Rodriguez netted with grace and continued his personal show in Brazil to give him six goals in five games. A stutter didn't send Cesar any way as he stood his ground but a cool finish gave him no chance.

Colombia transformed again, reverting back to the fast and flowing football demonstarted in Group C and their Round of 16 match against Uruguay. The pressure which has yet to fully stamp it's impact on Brazil increased once more.

Quintero gave Colombia a pair of fresh legs as he replaced a Cuadrado still angered by the referee's willingness to keep his cards in his pockets.

Rodriguez was finally joined by 10 other Colombians as they continued to press and hammer down the Brazilian door held up by the captain, Thiago Silva.

3 corners came in less than three minutes but Quintero couldn't direct any of them into the middle of the box but two came to the near post but neither were directed goal wards. 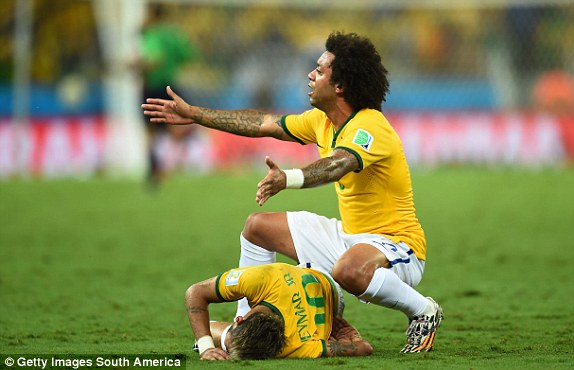 Tears filled the eyes of Neymar and plausibly many others in Brazil as he was stretchered off following a flying in his back. The star man departed but Brazil kept hanging onto a very loose thread.

The Colombian's gave Brazil a taste of their own dreadful medicine as they clattered into them on the sidelines. They broke their own play constantly as five minutes were added on by the referee. Rodriguez fell down more times as Brazil desperately searched to clear the ball away from Colombia's potent attack.

6 faces lined the Brazilian bench and all of the mouths were filled with nails as Colombia earned their fifth corner of the match. Quintero sent it onto Ramos' head but his flick wasn't matched by any of his team mates and Cesar had the goal kick again.

Julio Cesar wasn't called for a final save this time like against Chile last week and Brazil had their victory.

The party continues for Brazil, they have their first semi-final since they last won it in 2002. Colombia will have their grumbles but Brazil have overcome a challenge far greater than that faced before for this young squad.

The emotions got the better of Brazil in the past few weeks as they teared up for the national anthem but they finally channeled it in the perfect way, holding onto the victory gifted to them by an early Thiago Silva goal and a superb costless kick from David Luiz.

Next up the hosts face Germany in what is their first encounter in the World Cup since they won it in 2002. The cynics have been proved wrong so far and only time will tell if Neymar and co. can victor on the big stage for the first time in 12 years.