At a huge 6 ft 4, Sergio Romero stood like a giant bird with long wings covering the face of the goal post, patiently awaiting for another big man, Ron Vlaar of the Netherlands to take the first kick in their semi-final contest as both teams were eager to march onwards to meet Germany in Sunday’s final.

In an apparent and deliberate calculation, Romero dived towards his left to save Vlaar’s kick. It was the first huge step towards sealing their place in history once again. The second step came when the experienced Wesley Sneijder stepped-up to take his own. This time, Romero dived towards his left and parried the ball away. Argentina went on through to the finals defeating Netherlands 4-2 on penalties but in a star-studded squad, it was the heroics of Sergio Romero that saved the blushes of La Albiceleste.

“Chiquito” which translates ‘too little’, was Romero’s nickname right from his youthful days. Having a smaller stature compared to his brothers, Romero could not join his siblings in being a basketball player but ventured into football- a decision looking back now, was the ultimate one. In 2007, he got snapped up signing his first professional contract with Racing Club Avellaneda back in Argentina‘s first division and impressed enough to earn a €1.5m transfer to AZ Alkmaar incidentally, managed at the time by the current coach of the Netherlands, Luis Van Gaal. 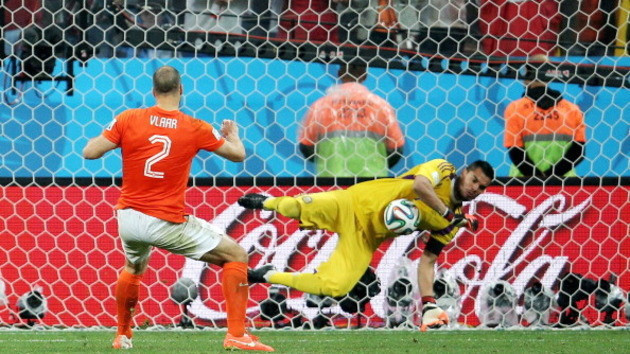 Romero spent four seasons with the Dutch side helping his team to claim the Eredivisie in 2009, keeping 18 clean sheets along the way. AZ conceded just 22 goals in the whole season with Romero setting the fourth longest stretch of time (950 minutes) for goalkeepers without conceding a goal.

Much so like his club career, Romero has started with humble beginnings. Diego Maradona called him up for his first international debut for the senior side in September 2009 having represented Argentina at the 2007 South American youth championships. Romero was in goal as Argentina defeated Paraguay 1-0 in a world cup qualifier and also in the win over Uruguay in Montevideo to book their place in the 2010 world cup finals. He also played in all five matches when they crashed at the quarter-finals. 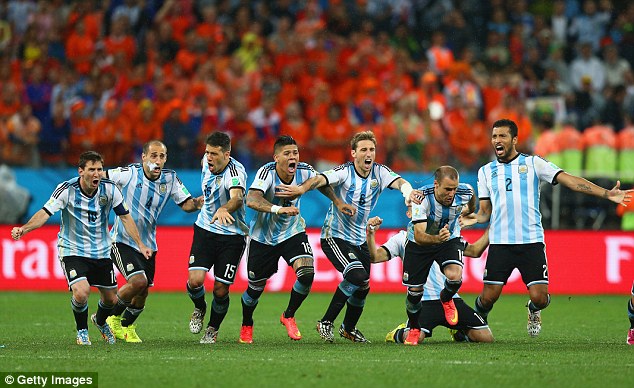 Plotting a graph of Romero’s career, one would be obliged to say that it’s rising. After all, not all goalkeepers get the chance to play at a FIFA World cup finals.

Since the start of the tournament, Romero has been in good form for Argentina. He has kept four clean sheets against Iran 1-0, Switzerland 1-0, Belgium 1-0 and Netherlands 0-0, getting to the final and certainly, no keeper left at this world cup can boast of that. The way and manner he guides his defence, his calmness and reflexes shows a player who has matured a great deal.

According to FIFA, Romero has played 600 minutes of football in Brazil stemming from six matches. He has attempted seven clearances and has a pass completion rate of 70 per cent which is very decent for a goalkeeper. Above all, his save rate is 83.3 per cent which is why Argentina has only conceded just three goals so far. Surely he is highly rated for the golden gloves award after the tournament. 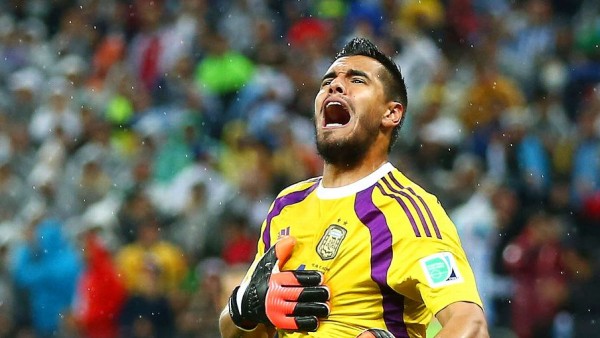 It’s even so easy for critics to say that the Argentine defense has been so good that Romero has had little to do but statistics don’t lie. The two penalties saved; helping Argentina to the finals is a perfect way to reply one’s critics and Romero has done that without much fuss.

With 53 international caps at 27 years, Romero sure has many years still to play for at the international stage but must come with his think caps, repeat or surpass some of the wonderful performances we’ve seen of him during the tournament to help Argentina win the trophy they last won in 1986 with another man of the match performance on Sunday at the Estadio du Maracana, Rio de Janiero.