La Liga strugglers Elche will know they have their work cut out against an in-form Barcelona side this weekend. Luis Enrique's side will travel to the Estadio Manuel Martínez Valero looking to keep the pressure on at the top of the table.

For Fran Escribá's Elche side, the omens do not look good. An opening day 3-0 defeat to the Catalan club was followed by a thumping 9-0 aggregate loss in the Copa del Ray earlier this month - a result that might still be fresh in the memory of the players and fans.

Despite the writing seemingly being on the wall, Los Franjiverdes will at least approach this fixture in a positive state of mind - if not a confident one, exactly, due to the nature of their opponents. Escribá's side have taken seven points from a possible nine on offer after the winter break - a string of results which has seen them climb out of the relegation zone. The fans will know, however, that it is asking a lot for their side to come away with a result come Saturday's final whistle. 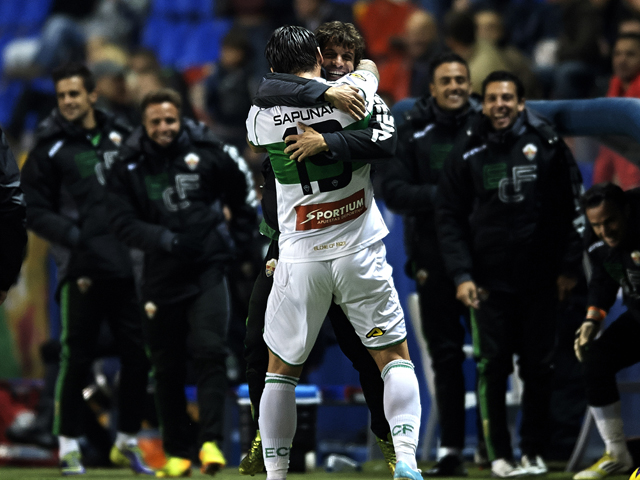 A 1-0 loss to David Moyes' Real Sociedad just three weeks ago - coupled with a host of new 'Messi to leave Barcelona' rumours quickly circulating the web - had left some talking of a crisis at Barcelona, with talks of dressing room bust-ups and a general sense of unease.

Recently, Enrique's side have settled the ship somewhat, and got back to business on the pitch, beating title-chasing rivals Atlético Madrid 3-1 - and Deportivo 4-0 - in the league. Barcelona are also fresh off another win over Atléti, this time a narrow 1-0 victory in the first leg of the Copa del Ray quarter-finals.

"I have complete confidence in Suarez, the goals will come"

Their attacking trio of Messi, Neymar and Luis Suarez are finding some fluency together, at times playing some wonderful, intricate football - although the latter has been receiving criticism for his slow start in La Liga, after socring just two goals. This prompted Enrique to defend the ex-Liverpool striker, speaking after the game against Atléti. "I have complete confidence in my team and complete confidence in Suarez. He didn't have a lot of luck in front of goal today. He couldn't find the net, but he played well. and managed to push Atlético's defenders back. I have no doubt that the goals will come", he said.

One would expect Suarez to have plenty of opportunities to add to his current collection of goals this weekend, as the Catalans set about taking apart Elche and keeping the pressure on at the top of the table.