England U17 crashed out of the U17 European Championships in disappointing style having expected to at least make a good attempt of retaining the trophy. Aleksei Tataev's first half goal gave Russia the win in a game with two missed penalties.

The Young Lions were less clinical than ever before as they missed a penalty and only recorded three shots on target out of 20 attempts.

A missed penalty from Nathan Holland seemed the turning point for England as Russia went on to score from a corner through Tataev. Russia missed a penalty to seal the win with 4 minutes left as Tayo Edun went on to be sent off in added time.

Yet Russia had the first good shot on goal before 10 minutes. Paul Woolston was forced into a save by Denisov who drove it low at the Newcastle keeper and in the resulting corner Mikhail Galaktionov's threatened Woolston again.

Tataev's shot went wide of the a ready to pounce Woolston from Tsygankov's delivery. The two champions of Europe in the past two years were fighting intensely in the first quarter of an hour, each side committing foul after foul. 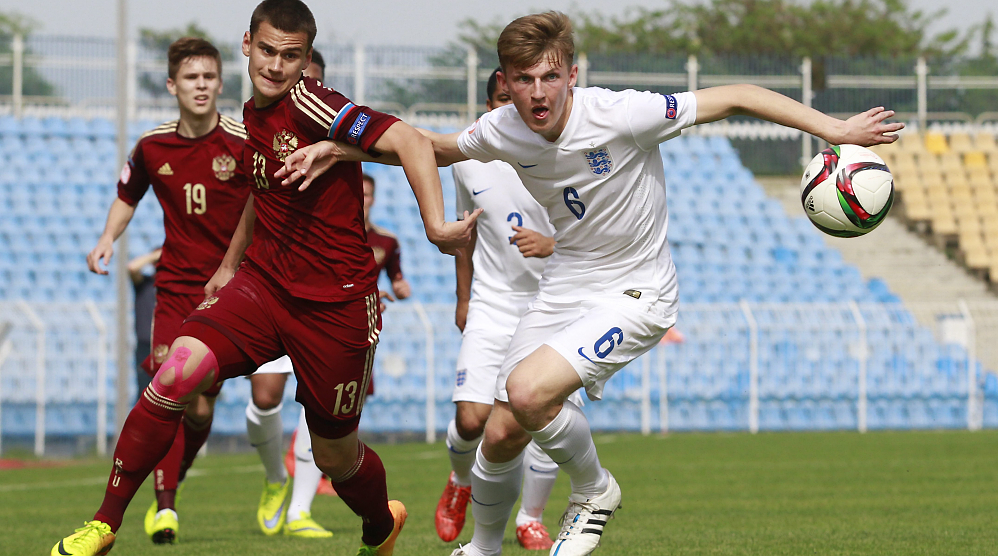 Russia's speedy winger, Dmitri Pletnev was forced off with just over ten minutes gone after rolling on his ankle. Schebakov replaced him but Russia looked to be a weaker side without him.

Nathan Holland had a chance to convert from one of many set pieces given away as he set it up in shooting range. Yet, as similar with the 1-0 win over the Republic of Ireland, England failed to take advantage of a free-kick opportunity.

Marcus Edwards, who scored the winner against both Italy and Ireland, was on the end of a late challenge after dribbling past three Russians as Kudryavtsev received a booking for his troubles.

The Spurs winger took the free-kick he earned but couldn't make anything of it. A second free-kick just seconds later was blocked by the wall. 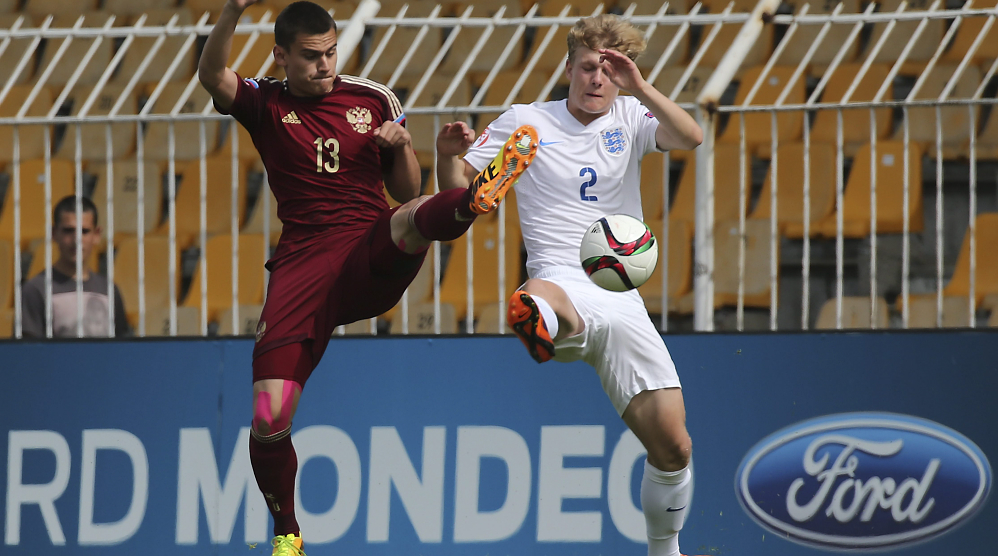 What appeared to be the decisive moment went in Russia's favour as Nathan Holland missed the chance to take England in front from the penalty spot. Stefan Mavididi chased down the rebound after Maksimenko saved Holland's strike.

Just three minutes later, the Young Lions had a golden chance again. This time, Maksimenko fumbled a backpass and the ball hit his defender. Peacock's side couldn't celebrate, though, as it was cleared off the line at the last minute by Tataev.

Against the previous five minutes of play, Russia took the lead with a great decision from the linesman. Aleksei Tataev's header seemed to have been cleared off the line by Holland, making up for his missed penalty. Yet the linesman on the far side awarded the goal from Georgi Makhatadze's corner.

Jay Dasilva powered forward as England searched for an equaliser before half time. Entering the box he set up Marcus Edwards, on two goals from the tournament already, but the Spurs winger struck it wide of the post.

The issue of clinical finishing seemed the problem once more as half time approached with 75% of England's shots off target.

Galaktionov made a change for Russia at half time as Galanin came on for Scherbakov.

England delight almost ensued just a minute after the restart as Tom Davies almost netted past Maksimenko before Herbie Kane followed up the rebound to have it saved again. Nathan Holland then missed the goal completely before hitting the woodwork a minute later following Chris Willock's driving run through the Russian half.

Russia made their third and final change before 60 minutes as Selyukov came on for Makhatadze, who assisted Tataev's first half goal.

With 20 minutes to go and at least a goal needed for England, John Peacock made the first change for the Young Lions with Tayo Edun coming on for Nathan Holland who played well but disappointed in terms of finishing. He hit 3 shots off target and just one on target with another hitting the woodwork, as well as missing a first half penalty.

Peacock quickly made another substitution as Danny Collinge, tipped as one of the stars of the tournament by VAVEL, was replaced by Easah Suliman - who became the final outfield player to make an appearance against Ireland last week.

Edwards and the substitute Suliman both tried from long range with Russia sitting very, very deep to protect their one goal lead and Suliman tested Maksimenko from Herbie Kane's floated cross before Dasilva hit a shot wide.

Ike Ugbo made an impact immediately after coming on for Stephan Mavididi as his shot was blocked by Maksimenko after Marcus Edwards fed a ball to him inside the box.

Before the game, Paul Woolston told TheFA.com that he wanted to make his own name for himself and not be compared to last year's hero who won it for England in the final through penalties.

He did so. With 5 minutes to go, the substitute Tayo Edun brought down Ivan Galanin after Yegor Denisov had charged down the pitch to square it to his teammate.

A strike past Woolston would have finished it off but the Newcastle keeper stood tall and wide as Boris Tsygankov struck his penalty too close to him.

England won a corner, had shots blocked, made more chances but nothing worked for them as the 80 minutes rapidly approached.

Tayo Edun recieved his second booking in 10 minutes to be sent off after only being on the pitch since 60 minutes, making the 5 minutes of added time seem even shorter for a battling England.

No one could save England from crashing out with a long period of added time.

Russia celebrated on the pitch with hugs between players and coaches as the England squad knew they had fallen well short of pre-tournament expectations by going out at the quarter-finals.

John Peacock reiterated game after game that they had to be more clinical but once more they failed to do so. A missed penalty and 70% of shots off target meant that the reigning champions didn't even reach the last four of the competition.

Russia now have the chance to take off the trophy off England and return it to Moscow after a year's break at Wembley.

Eintracht Frankfurt vs Werder Bremen Preview: How to watch, kick off time, team news, predicted lineups, and ones to watch 2 hours ago

Mainz vs Borussia Monchengladbach Preview: How to watch, kick-off time, team news, predicted lineups and ones to watch. 7 days ago
Restore your password
Please enter your user name or email.
Login Member or Writer Panel
Enjoy your own Customized Newspaperwith VAVEL topics' carousels!