Portugal U20 topped Group C thanks to a ruthless victory over second place Colombia U20 in the final group stage game of the FIFA U20 World Cup.

An early free-kick from Nuno provided a less exciting first half than expected as Portugal were happy to sit back.

Yet after the break and after Colombia threatened, they broke with speed and power to earn a stonewall penalty. Andre Silva scored his second of the tournament with a spot kick into the right bottom corner before he made it three for Sousa's side.

A wonderful, floating and dipping cross came in from the left flank for Silva to loop into the left corner, above and beyond the running back Davinson Sanchez.

Santos Borre got one back for Colombia and it proved to be vital as they had to rely on goal difference to beat Senegal to the second spot for the knockout stages.

Portugal were by far the best team in Group C throughout the three games, conceding just once and winning thrice. They deservedly finish top of the group and look like one of the unexpected contenders for the crown. 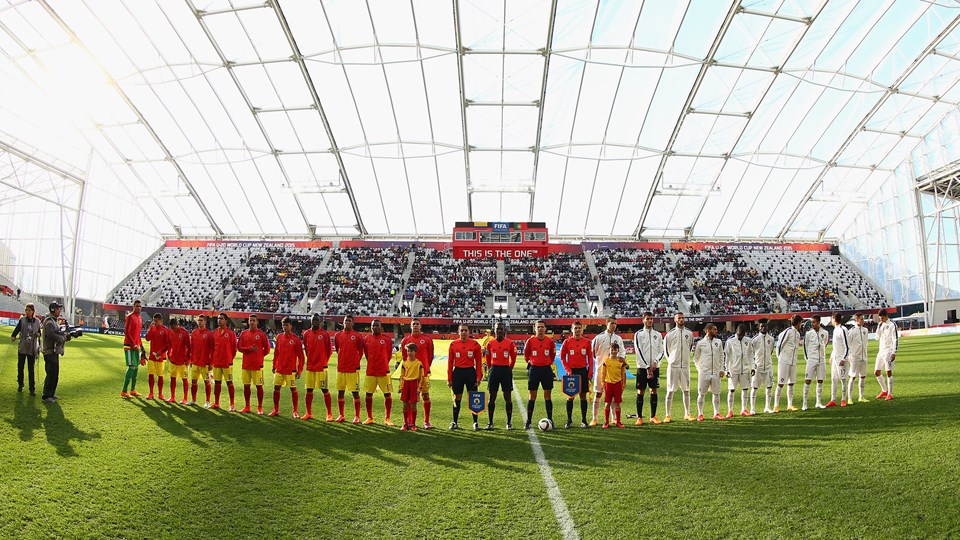 An almost full Otago Stadium in Dunedin rose to their feet early on for the Portuguese who had yet to concede in the U20 World Cup.

Nuno provided some set-piece magic within five minutes to propel Portugal on their way to what would have been a third win out of three in the group stage.

His attacking threat has been obvious throughout the tournament so far and he opened his scoring book against Senegal on the first weekend.

As his teammate stepped over the ball and the Colombian wall flinched, Nuno struck it with such speed and swerve that Montero could hardly reach his hand up for it.

The awkward position of the shot left it in between Montero's head and the top of his arm and there was no hope for him once it got past his four man wall. Nuno pulled away in early celebration as the small group of fans in Red celebrated in the sidestand.

Los Cafeteros grew into the game as the twenty minute mark approached. Alexis Zapata began to move in between the lines and the balls began to came over for him, alongside Borre.

Yet Portugal seemed happy to retain their lead, even without retaining the ball as the group toppers willing to allow Colombia possession.

Andre Silva was closed down quickly as he snuck past the usual line of defence and in on Montero's goal.

Ivo tricked his way through a cluster of Colombia players approaching the half hour mark but action was limited between two of the most exciting attacking teams in the competition.

Carlos Restrepo's side had their own chance to make it count from a free-kick but Zapata's curling ball slowly drifted away from Andre Moreira's post.

Just as Colombia would begin to build something of real promise, unlike a little run here or there, but an attacking possession play, captain Nunes or Guzzo would cut it out well for Portugal.

And yet when finally the chance arrived on a silver platter, Joao Rodriguez - scorer of Los Cafeteros' first goal in the tournament - couldn't get it past Moreira.

With Nunes or Guzzo left behind for the first time, Rodriguez had the ball played into his feet but Moreira came out well to meet him and close down the danger, before Rodriguez could get it from out of his feet.

Tello strode to the byline away from his marker with few minutes remaining of the first half but couldn't control the ball well enough with his first touch. He had to stretch to cross in to Moreira's and as such lost the chance.

Victor Gutierrez picked up a yellow card after a frustrating first 45 minutes for him in the full yellow strip of Colombia.

Helio Sousa looked on with great panic and then relief as Rodriguez couldn't steal in front of his marker in added time after a wonderfully crafted cross from Alexis Zapata.

Sergio Villarreal came off for Deinner Quinones for the second half as Restrepo looked to make his Colombia side have a more clinical face, starting in midfield.

Santos Borre broke free of the resolute Portugal backline. The first clear-cut chance was superbly cut out by the captain Nunes though as Sousa's side kept their cleansheet record.

Two resulting corners came to nothing but the early chance, the early miss, from Borre was a good sign for Los Cafeteros, who had a large contingent in the Otago Stadium.

The aggressiveness and style that saw a wonderful first half display in the opening win against Qatar was on show in the early minutes of the second half.

Riquichio picked up a booking as he fouled Joao Rodriguez on the ball with a high foot in his chest.

Colombia's storm continued to brew around the Portugal penalty area. Yet as they attacked with better intent, Portugal broke away with speed.

Charging forward from the wasted Rodriguez free-kick, Colombia were full of mistakes. Three players failed to deal with the man on the ball before he offloaded to his teammate on the edge of the box. The clearance from the resulting pass was hoofed right into the path of the Portuguese player and Montero charged off of his line and took him out in the air.

The booking was obvious and so was the penalty in a moment of madness for Los Cafeteros' defence. Andre Silva stepped up to hit the back of the net for the second time of the tournament from midfield as Portugal extended their lead rather than lost it.

We have seen some free-kicks that would be worthy of a mention anywhere in the world but Nuno's early take couldn't be replicated by Alexis Zapata. From the set-piece he struck it brilliantly, but ever so slightly high above Moreira's bar.

Portugal turned on the style with half an hour to go. Andres Tello looked frustrated to be tracking back instead of powering forward and with his side two goals down, the Juventus midfielder gave away another free-kick and earned a booking.

From a resulting corner, Portugal played it short in no urgent need to grab another goal. Guzzo found space from the corner of the box, stepped into it and struck well but over Montero's bar.

Chico Ramos picked up a booking as Colombia made their second change of the game, bringing off Juan Otero for Jarlan Barrera.

Moments later, Portugal made their first change of the game as Ivo came off for Goncalo Guedes.

Andre Silva made it three for Portugal with an astonishingly quick and beautiful goal. A wonderful, floating and dipping cross came in for Silva and he pulled his neck backwards to power a looping header into the far left corner. Davinson Sanchez' large frame couldn't stop the header as it bounced just beyond the line and Colombia looked down and out. 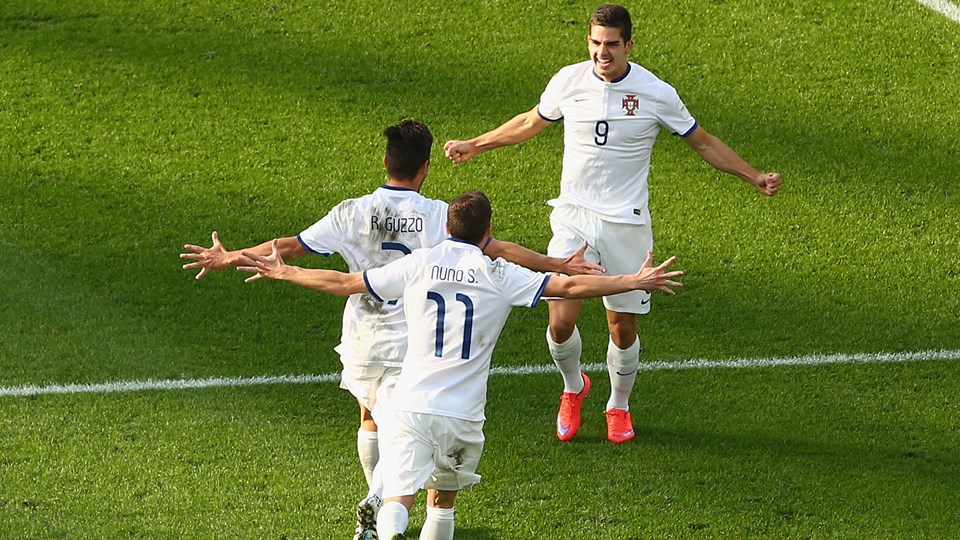 Zapata had a quick chance to regain a two goal disadvantage, at least, with his third free-kick chance of the game but hit the cluster of bodies in the box and it deflected skywards.

Confidence was aplenty for Portugal as the game looked to be well and truly over with just twenty minuets left. Guzzo produced a wonderful volley and header one two before striking from long range over Montero's goal.

Nelson Monte came on for Riquicho as Portugal looked to give some of the peripheral figure a chance.

After making runs throughout the 70 minutes, Borre finally had something to his name on the board and Colombia had an ever so small chance of producing a remarkable comeback.

Borre broke through the line and shaped himself up to shoot anywhere across the goal before curling it round Moreira and into the right bottom corner.

Los Cafeteros pushed forward and pushed hard. Quinones struck from long range at Moreira as he was finally challenged on a consistent basis.

The confidence of a goal shows as Santos Borre's runs became more regular than before and the ambitious balls over the top of the defence became something of note instead of a wasted opportunity, as in the first half.

Andre Moreira came rushing out of his goal to meet Santos Borre, with a superb ball clipped over the top by Zapata. Again, the confidence was clear as Borre went in for the challenge with only one thought of the goal 18 yards in front of him.

Rodriguez ran inside from the left flank to the delight of the Cafeteros fans in the packed side stand in Dunedin. Yet the linesman's flag shot up to deny him the opportunity of being one-on-one with Moreira.

Rony Lopes of Lille came on for the first goalscorer, the 3rd minute free-kick goalscorer, Nuno who had looked quieter in the second half, despite two goals from his teammates.

Portugal provided magic once again with some wonderful team play between the four main attackers and it was chipped over for a volleyed cross before the dribbling ball in the centre of the 18-yard-box couldn't be struck past Montero.

Steven Lucumi replaced Joao Rodriguez, despite the recent chances on goal, as Restrepo issued the final bid for late glory.

Barrera shot from long range but pulled his head back in frustration as it hit the boardings behind the goal, with Senegal taking the lead against Qatar at the same time, to ensure second place in Group C was decided on goal difference.

Colombia had the better one by a single goal and as Portugal attacked, the players didn't know but everyone watching knew a single goal could change the future of these players.

Jeison Angulo drove down the left flank rarely throughout the 90 minutes but did so with little time to go, to no avail, as Colombia looked to provide late drama.

Penalty appeals came loud and clear from throughout the ground as the substitute Barrera fell down in the box but the referee looked away quickly.

Late attacks were of nothing to note for Colombia as they knew the chance of a draw was zero, yet the final whistle blew and despite defeat, Los Cafeteros head to the second round thanks to a better goal difference than Senegal.

The first half was poor again from Colombia after disappointing performances in the second period against Qatar and against Senegal. Yet despite Portugal showing their superiority throughout, Carlos Restrepo's Colombia looked far improved after a team talk and will hope to provide a full 90 minutes of attacking threat in their knockout game on June 10th.

Meanwhile, Portugal top the group having conceded just 1 goal throughout the three games and winning every single one of them. They have been an entertaining team to watch, a ruthless team to face and look one of the dark horses of the tournament.

Werder Bremen 1-1 Hoffenheim: Honors even at the Wohninvest Weserstadion&nbsp; 3 hours ago