Barcelona have made it through to the last 16 of the Champions League in spectacular style, with a 6-1 demolition of Roma.

The game set off a blistering pace with Lionel Messi and Edin Dzeko having great chances, before Luis Suarez and Messi gave Barca a two goal cushion inside 20 minutes. Suarez added his second and Barca’s third before the break.

Neymar and Iago Falque had great early opportunities in the second period before Gerard Pique and Messi added a fourth and fifth, and a final goal from Adriano made Dzeko's late effort as mere consolation.

It was the home side that got off on the right foot, and could have taken the lead in the fourth minute when Messi found himself in acres of room and checked back before firing a shot towards the top corner - but Wojciech Szczesny pulled off a great one-handed save.

They had the ball in the net two minutes later after a great run of play which saw Neymar play it through to Messi, who it into an empty net, but the Brazilian was flagged offside.

Messi then had another great opportunity in the ninth minute as he was played clean through by Sergio Busquets but the Argentine put his shot wide of the mark.

Despite the pressure Roma came so close to taking the lead in the 12th minute when Dzeko got up highest to the corner but he put it agonisingly over the crossbar.

The Bosnian would live to regret his miss and Barcelona scored twice in quick succession.

Suarez was up first when he opened the scoring in the 15th minute, Neymar played another excellent ball this time into his compatriot Dani Alves who squared it across the area and Suarez was there to turn it home.

Messi marked his return to first-team football with the second goal in three minutes.

It was another classic Barcelona goal as Neymar played it to Messi who exchanged it with Suarez and the Uruguayan played a great chipped ball over the defence into the Argentine who produced an excellent chip over Szczesny.

Luis Enrique’s side were on fire in the first period and managed a third just before half-time in spectacular style.

It looked like the chance had gone begging when a cross from the right-hand side was well cleared by Seydou Keita but not for Suarez who composed himself to a hit a great volley right into Szczesny’s bottom right-hand corner to effectively end the match.

Cranking up the pressure

The home side carried their blistering form into the second period and could have got a fourth in the 51st minute.

Neymar had been causing problems all evening and unleashed a fizzing effort but Szczesny did will to get across his goal to claw it away.

Roma then had another good opportunity as they played some decent football but Falque put his shot too close to the Marc-Andre ter Stegen who pulled off a decent stop.

Roma were once again made to regret their squandered opportunities as Barca added another two to kill off the game.

It was Pique who stepped up first in the 56th minute and it was the three musketeers again with Neymar passing it to Suarez who flicked it over to Messi who unselfishly squares it to the defender who tapped it into an empty net.

Messi added his second of the evening bang on the hour mark, the trio proved deadly once again as Neymar brought it down brilliantly before playing it Suarez whose flick allows Messi to take the first-time shot.

It was initially well saved by Szczesny but Messi was the quickest to react as he tapped home the rebound.

It only got better from there for Enrique’s side when they were handed the penalty. Substitute Salih Ucan almost instantly tripped Neymar which gave Cunyet Cakir no choice but to point to the spot.

Neymar was handed the opportunity to collect the goal that he very much deserved but his effort was saved by Szczesny but Adriano was on hand in milliseconds as he smashed it into the roof of the net. 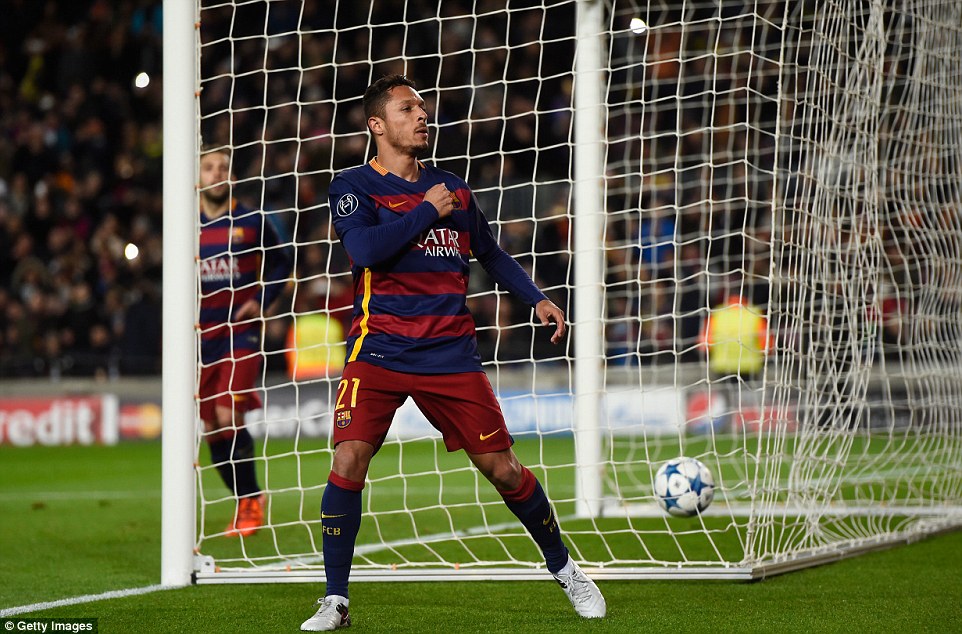 Messi nearly had his hat-trick ten minutes from the end but Szczesny managed to block the effort with his face to keep the score down.

Their clean sheet looked to be in doubt eight minutes from the end when Roma were handed their own penalty when Dzeko was blocked by Thomas Vermaelen. The former Manchester City man decided to take the penalty himself but ter Stegen guessed right.

The game ended on a sour note when Roma managed to get one back in extra-time. Barca had laid off their onslaught and it showed when Lucas Digne was allowed to put a ball in the area and with the final touch Dzeko headed home but it could only prove a slight consolation.

Valencia keen on bringing in Keita Balde 7 months ago