MSV Duisburg ended a run of five games without a win on Sunday with a comfortable 3-0 victory over SV Sandhausen.

Rock bottom of the 2. Bundesliga table coming into the game whilst their opponents sat pretty in fifth, few expected the dominant showing that the hosts put on as they cruised to all three points.

They really should have been ahead at the break, but they made sure they did not pay the price for chances gone by as Rolf Feltscher and Tim Albutat scored within six minutes of each other just past the hour to put Duisburg a comfortable two goals up.

Sandhausen never looked like a team searching for their third successive win, and their miserable day was rounded off in the final minute of the game when Zlatko Janjic added a deserved third for the victorious hosts.

Despite coming into the game without a win in five, it was Duisburg who dominated the opening stages of this encounter, albeit without generating a great deal of chances.

They had a big shout for a penalty turned down early on though, Kingsley Onuegbu hauled to the ground by Tim Kister, who was walking a thin line already having been booked as early as the seventh minute.

However, the hosts continue to press and their first half chance came just past the 20 minute mark when Giorgi Chanturia danced through the Sandhausen team before squaring for Onuegbu, but the Nigerian striker was not on the same wavelength as his teammate and did not make the run that the Georgian was anticipating, the ball instead rolling away from danger.

Sandhausen get into it, but openness only suits the hosts

Sandhausen got more into the game as it progressed, slowly but surely taking charge of the ball and getting bodies forward to try and make the most of the good spell they were enjoying.

However, they struggled to breach a disciplined Duisburg defence, and it was the home side who created the game's first big chance with half time nearing as Onuegbu forced a stunning save out of Marco Knaller.

Chanturia was the architect once more, his eye for a pass allowing him to find the darting run of the Nigerian striker, but his powerful header was beaten away brilliantly by Knaller as it flew towards the top corner of his goal.

With Sandhausen maintaining their control of possession, Duisburg were allowed the opportunity to play the closing moments of the first half on the counter, and the goal they deserved almost came in the final minute of the period when Chanturia robbed a hesitant Leart Paqarada of the ball on the right wing.

Nonetheless, after doing the hard work - pressing, winning the ball back and bursting into the area - the Georgian could not apply the finish as Kister got in the way to block his effort.

Clinical start to the second half puts hosts ahead

With Duisburg struggling down near the bottom, the fans may have felt that their chance had gone when they went in at the break with the deadlock still yet to be broken. However, Sandhausen did not take their chance to regroup and it was the home side who came out strong again in the second half before taking the lead just past the hour.

Both teams had been limited to long range efforts in the opening exchanges of the second period, and so when Duisburg got the chance to get the ball into the box with successive corners, they were keen to take advantage - the first set piece seeing Feltscher's header force another sublime stop from Knaller.

However, the resulting corner from that produced a better result for the hosts, and for Feltscher in particular as he capitalised on a goal-mouth scramble to prod the ball into the back of the net and give his team the lead.

It was nothing less than the home side deserved and they would add to their advantage all of six minutes later too through Albutat, the midfielder combining brilliantly with Janjic to smash home his cross and give Duisburg some breathing space as they moved one step closer to breaking their winless run.

Perfect performance capped off by Janjic

Despite being comfortably ahead now, the home team were never going to drop their intensity levels as they really began to enjoy playing their football in a rare winning position. Playing with freedom and much less pressure, they were confidently carving through Sandhausen, who were deflated and lacklustre by this point.

As we entered the closing 20 minutes, Thomas Bröker really should have wrapped things up too. Some more great football gave Onuegbu the chance to strike, but after his effort was saved fantastically by Knaller, Bröker scuffed his shot into the ground and over the empty net from a few yards out.

With attack proving the best form of defence, Duisburg pushed Sandhausen further and further back to prevent any attempts of a comeback and they got the third goal they needed to be sure in the final minute of the 90.

Janjic was the scorer and he deserved to get his name on the scoresheet after a delightful performance, nestling his effort in the bottom corner after being teed up by substitute Kevin Scheidhauer.

It was the perfect way to cap off an exceptional performance by the struggling side, who showed that they have all the quality to avoid relegation this season, but just need the consistency to go with it. 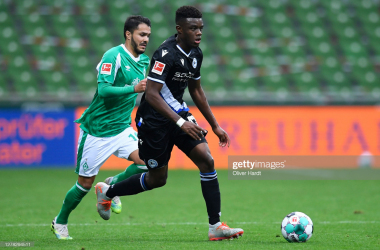 Arminia Bielefeld vs Werder Bremen preview: How to watch, kick off time, team news, predicted lineups, and ones to watch 16 minutes ago