Andrea Mandorlini will be fortunate to preside over his side's Coppa Italia clash with Pavia on Wednesday evening after his Verona side were downed by a Daniel Ciofani inspired Frosinone.

The forward opened his account in Serie A within 19 minutes and doubled the home side's lead five minutes before the break. With goalkeeper Rafael having been dismissed midway through the opening period, Verona were forced to contend with a numerical disadvantage and, though they netted twice through Federico Viviani and Vangelis Moras, it arrived after Federico Dionisi had added a third three minutes after the restart.

Visitors slow out of the blocks

Buoyed by last season's joint-Capocannoniere Luca Toni's return to action, Verona, despite an early siege, appeared overawed by the significance of the ocassion.

Still searching for their first victory of the campaign, their hopes of claiming a win here were significantly dented when goalkeeper Rafael was adjudged to have felled Luca Paganini inside the penalty area. As if to rub salt into the Gialloblu's gaping wounds, the referee brandished a red and Daniel Ciofani, barren since his side earned promotion, dispatched with aplomb. 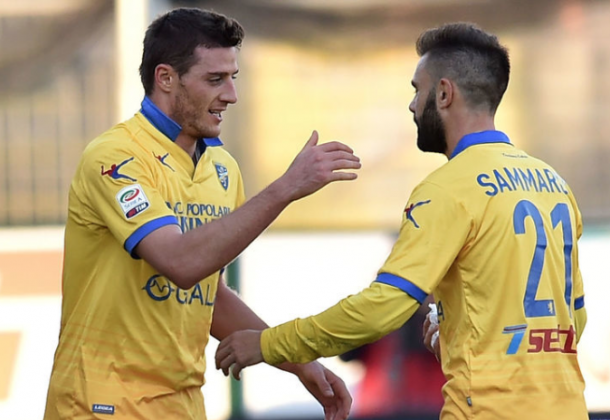 Verona's response was instantaneous, though the hosts were indebted to Nicola Leali when he denied Toni after the burly forward met a cross from the right at point blank range.

Viviani tried his luck from distance minutes later and Leali, yet again, was equal to the midfielder's line drive. Verona, it seemed, were in the ascendency.

But, with Frosinone beginning to circulate possession with intent, they would be left to rue that period of dominance as Ciofani added his second of the afternoon.

"It’s right at this moment that everyone reflects on what is happening and take their share of the responsibility,” noted Riccardo Bigon, director of Verona, after the defeat. “Tonight I will speak to the President, we’ll evaluate the situation."

Mandorlini, it appeared, was giving his last team talk as Verona manager.

The away side emerged from the dressing rooms cognisant of the implications a defeat would mark.

Yet, no sooner than three minutes after the restart, they found themselves 3-0 down.

Paolo Sammarco manufactured the hosts' third, sliding in Federico Dionisi who made no mistake.

Juanito Gomez was hooked for summer recruit Giampaolo Pazzini and, though the effect was not instantaneous, it marked an upturn in fortune.

The substitute stung Leali's palms on 66 minutes and, three minutes later, Viviani provided a consolation with a delightful free-kick.

But the Frosinone No.1, who was outstanding throughout, was culpable for Verona's second, allowing Moras to profit a stage a dramatic last quarter of an hour.

The away side's late endeavour, though, was in vain as Verona remain rooted to the foot of the table with Mandorlini's future in question.