Maxi Lopez spared the blushes of Daniele Padelli as the forward dispatched a last-gasp spot-kick to pile further misery on Rudi Garcia and Roma.

Miralem Pjanic had profited from the goalkeeper's error when he floated in a free-kick eight minutes from time but there would be a twist in the tale when Kostas Manolas upended Andrea Belotti deep into stoppage time.

No sooner had three minute elapsed had Torino gone agonisingly close to opening the scoring. Cristian Molinaro, a thorn in the Bologna right-hand side last time out, delivered invitingly across the danger area to Andrea Belotti but the ex-Palermo forward could not slide his effort beyond Wojciech Szczesny.

The hosts’ dominance continued and, on five minutes, Bruno Peres’ strike was inches away from looping over Szczesny between sticks after a deflection via Lucas Digne.

Roma, though, began to get a foothold on proceedings, with Edin Džeko meeting Alessandro Florenzi’s expertly weighted centre. But Kamil Glik intervened.

The visitors hoarded possession for periods afterwards, but piercing through a markedly parsimonious Torino backline was proving a tall order. Toro, too, look menacing on the break, with Daniele Baselli and Belotti combining in one instance. Antonio Rudiger, though, stood in the way.

Worryingly for Rudi Garcia, Gervinho was forced off after 24 minutes clutching his thigh. Juan Iturbe replaced the Ivorian though Garcia, even if the camera did not reflect his emotions, must have been wincing on the touchline.

Neither side appeared capable of penetrating the other as the game crept towards half-time. Iago Falque whipped a hopeful cross towards Iturbe on 39 minutes but, in keeping with the theme of the opening period, it sailed over the recipients heads.

The Granata were offered a glimpse of the goal when they broke swiftly in stoppage time, but Belotti, who cut an extremely isolated figure throughout the first-half, blasted over.

Play resumed after the interval with Roma firmly in the ascendency.

Radja Nainggolan, conspicuously anonymous during the opening 45 minutes, was showing intent, going close from distance while drifting through the heart of the Torino rearguard and sending an acrobatic effort towards goal.

Bruno Peres showed nimble footwork on 57 minutes to liberate himself for a shot, but Szczesny collected comfortably. 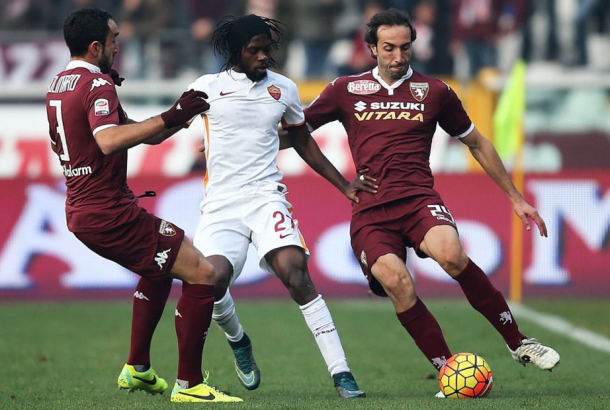 A scan is expected to reveal the extent of Gervinho's injury in the coming days. (Image source: Nation FM)

The Brazilian, perhaps the hosts brightest player, then fizzed a tantalising cross into the penalty area, after beguiling Digne on the left, but there were no takers.

As the half hour mark was elapsed, Roma controlled the lion’s share of the possession but it was the home side who displayed greater impetus. Afriye Acquah flashed a shot over — with Belotti better placed to his right — with the Granata, as they had done in the first-half, posing questions on the counter-attack.

Džeko then squandered a glorious opportunity when he headed over from Florenzi’s cross.

But perhaps the best opportunity of the half fell to Roma. With 15 minutes to play, Iturbe met Iago Falque’s outswinging corner at the near post but, unmarked, the winger headed into the side netting.

But, with eight minutes remaining, Roma dug themselves out of a ditch. Miralem Pjanic floated a delightful free-kick into the penalty area that eluded everyone including Torino goalkeeper Daniele Padelli. Vasilis Torosidis, readying himself on the touchline alongside Garcia, punched the air in jubilation.

His compatriot, Džeko, could have put the game beyond doubt deep into stoppage time but he foiled by Padelli.

The forward would be left to rue that miss as the Giallorossi contrived to concede minutes later.

After Rudiger miscontrolled, Belotti pounced and was upended by Kostas Manolas. The referee had no reservations about pointing to the penalty spot and Maxi Lopez, the substitute, converted to salvage a crucial point for the hosts.