Genoa, it seemed, were still reeling from last weekend's 2-1 home defeat to lowly Carpi as the Rossoblu yielded a limp showing against an Inter side who exorcised the ghosts of Monday night's 2-1 defeat to Napoli.

Adem Ljajic manufactured the solitary goal of the contest just shy of the hour mark when he bent a free-kick beyond Mattia Perin to propel the Nerazzurri to the summit of the table ahead of Napoli's clash with Bologna tomorrow.

Inter were quick out the traps and, within ninety seconds, they were threatening Perin’s goal. Adem Ljajic ushered in Rodrigo Palacio, favoured over Mauro Icardi against his former employers, but the Argentine’s cut-back was behind Felipe Melo and the bullish midfielder, leaning back, fired his effort over.

Despite Inter’s early intent, however, their forays in-behind Genoa’s backline were intermittent. Ljajic showcased his peerless dribbling on 17 minutes after committing Diogo Figueiras not once but twice, though his ensuing effort posed no threat to Mattia Perin.

Jonathan Biabany’s weak attempt on 25 minutes was perhaps indicative of Inter’s nascent dominance. The Frenchman received possession from Stefan Jovetic on the edge of the area but he was quickly foiled as he shaped to shoot.

Palacio, whose deft movement was manifest throughout the first-half was released by Jovetic but Christian Ansaldi intervened.

Gary Medel then tried his luck from distance after Biabany broke through the heart of the Genoa midfield.

Such was the diffidence of the visitors that they were forced to wait until the 36th minute mark to fashion their first corner of the game.

But with two minutes remaining until the interval, Inter constructed their most menacing chance of the half. Alex Telles was posing questions down the right hand side of Genoa’s all evening and, after being liberated in acres of space, picked out Ljajic in the penalty area. Unchecked, the winger met the Brazilian’s cross with conviction but Perin was down quickly to palm his effort to safety. 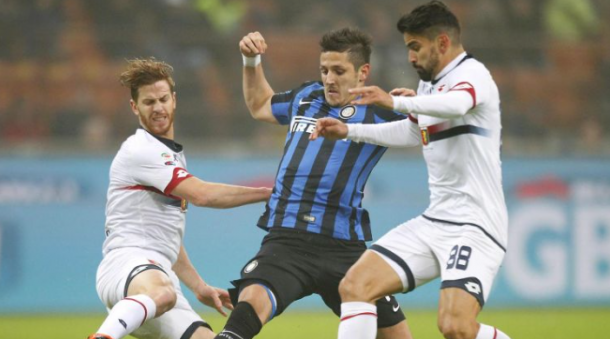 The hosts cranked up the pressure during the dying moments of the first-half as Ljajic, after a surging scurry forward, unleashed an effort at the Genoa goal but the ball trickled agonisingly wide.

The crowed were becoming discernibly restless as Inter continued to huff and puff but showed no evidence of blowing the Genoa house, made more of bricks than straws, down.

Tino Costa encapsulated his side’s diffidence five minutes after the restart when he blazed over when space began to open up. It was Genoa’s first attempt of the contest.

Their second soon followed when Ansaldi delivered to the far post and Figueiras, in acres of space, prompted fingertips from Samir Handanovic.

The home responded with a move of their own. Palacio drifted to the left and cut the ball back to an advancing Jovetic in space, but the forward volleyed over.

Yet it would be long until the deadlock was broken. After being upended on the edge of the area, Ljajic curled an inviting free-kick into the mix which, bizarrely, eluded everyone including Perin, rooted to the spot in disbelief.

75 minutes had elapsed but there was still no signs of Mauro Icardi. There was, however, a chance that opened up for Biabany, but the Frenchman’s delivery evaded everyone.

What did blemish Inter’s otherwise comfortable display, however, was the injury inflicted on Jovetic. The forward was forced to make way for Ivan Perisic and a scan in the forthcoming days set to reveal the extent of his problem.

It became a backs to the wall mission for the hosts when Daniele D'Ambrosio was dismissed with four minutes remaining for a second bookable offence.