Fiorentina made a statement ahead of a potentially decisive week as they swatted aside a Udinese outfit buoyed by their Coppa Italia triumph in midweek with consumate ease.

Nikola Kalinic began the rout when he deflected Milan Badelj's line-drive past opposing goalkeeper Orestis Karnezis midway through the first-half, before Josip Ilicic dispatched from 12 yards after Emmanuel Badu had felled the Croat inside the area. The captain, Gonzalo Rodriguez, compounded the visitors' misery when he headed home from a corner with five minutes remaining.

Fiorentina quickly monopolised and, after Josip Ilicic and Federico Bernardeschi had dovetailed down the right-hand side, Nikola Kalinic went close from the ensuing cut-back courtesy of the Italian U21 international. Ilicic was at his scintillating best during the opening exchanges, assuming clever positions between the Udinese lines and feeding Kalinic, even if, on one instance, they were on differing wavelengths.

Marcos Alonso, as well, bore all the hallmark of the hosts early dominance, exchanging passes with Borja Valero and firing a shot that prompted Orestis Karnezis into a fingertip stop at his near post.

The away side began to get a foothold on proceedings and Nenad Tomovic, deputising for the injured Facundo Roncaglia, was forced into a heroic, last-ditch sliding challenge to prevent Edenilson from latching onto Emmanuel Badu’s pass. But their conspicuously high-line was posing questions. Kalinic thought he had sprung the offside trap when ushered in by Ilicic on 20 minutes, but the linesman was swift in raising his flag.

No sooner than five minutes later, though, Karnezis would be picking the ball out of his net. After Edenilson cleared straight to Milan Badelj, the midfielder drove his effort at goal and, aided by a slight deflection off the heel of Kalinic, wrong footed the Udinese No.1 to open the scoring.

The visitors responded with an opportunity of their own, with Silvan Widmer crashing a header off the outside of the post. Badu, again, would be left to rue an opportunity missed when he met Felipe’s cross but could not direct his header on target. 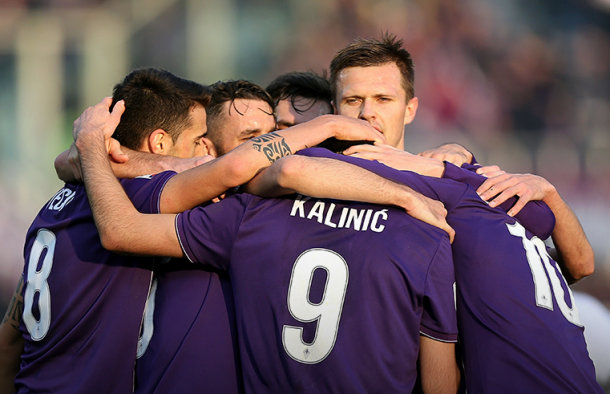 Kalinic was presented with a similarly golden chance when Alonso delivered an unerring centre into the Croat but, from three yards out with the goal to aim at, he volleyed over.

The second-half began in similar fashion to the first, with the hosts hoarding the ball and Udinese content in relinquishing possession. Borja Valero was a central component early on, threading through Kalinic but the forward was adjudged to have strayed offside.

Stefano Colantuono introduced Antonio Di Natale, two-goal hero in midweek, as the visitors went in search of an equaliser.

But the substitute would be vain as Fiorentina were presented with an opportunity to extend their lead. Badu, profligate down the other end, upended Kalinic as he shaped to shoot. Ilicic, so reliable from 12 yards, rifled his spot-kick into the top corner to notch his five goal of the campaign.

The hosts could have put the game beyond reach when Kalinic and Ilicic combined to liberate Bernadeschi down the right. Felipe, though, raced back to thwart a potential third. Kalinic, seconds later, drifted in-behind but his first touch was poor as the ball trickled through to Karnezis.

With Thursday night’s decisive Europa League clash in mind, Paulo Sousa hooked Ilicic with 20 minutes remaining, yet La Viola could have added sheen to the scoreline when Marcos Alonso fizzed a cross into the penalty area that evaded Kalinic and drifted inches wide of the far post.

Small matter, however, as Gonzalo Rodriguez rose highest from a corner to add a third for the hosts with five minutes left to play.