Wolfsburg confirmed their place as Group B winners whilst Manchester United crashed out of the Champions League, as the Bundeliga side triumped 3-2 in a dramatic game at the Volkswagen Arena.

Having gone ahead in the first half only to be pegged back and then go behind, the Red Devils did equalise in the second half and looked to be going through, only for Naldo's late winner to decide things.

Louis Van Gaal's side made the quicker start to proceedings, and found themselves a goal ahead after just nine minutes. Juan Mata span in the middle and played a perfect through ball to Anthony Martial, with the Frenchman making no mistake in placing his shot past Diego Benaglio.

The lead didn't last long though, as the Wolves hit back with an equaliser from Naldo coming just four minutes later. Ricardo Rodriguez swung in a superb free-kick, which was flicked in by the Brazilian defender, making it 1-1. The excellent nature of Rodriguez's free-kick made it all the more a shame when he was forced off with what looked like a hamstring problem minutes later.

The game was taking on a real end to end nature, and United could have gone back ahead were it not for Benaglio's heroics, as he stretched to make a great save from Marouane Fellaini's header.

It was a chance that the Belgian would live to regret, as a swift attacking move saw the Bundesliga side complete the turnaround, and go 2-1 ahead.

Julian Draxler was at the heartbeat of an amazing move, as he bypassed two players with cool dribbling, played a one-two to get in behind the defence before eventually squaring the ball for Vieirinha to roll into an empty net. 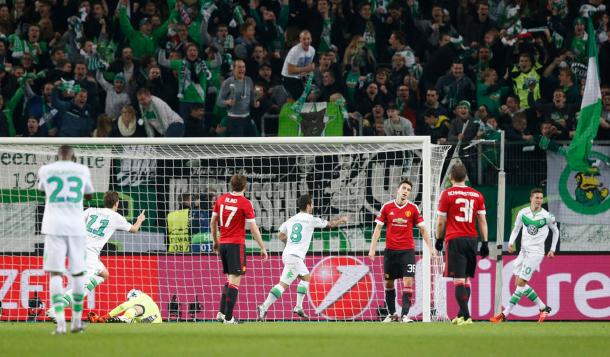 United have goal controversially ruled out

Wolfsburg were really turning up the heat as they cemented their place at the top of the group, and could have been 3-1 ahead as Draxler had a chance of his own, twisting and turning in the area only for David De Gea to save his goalbound shot.

Things looked as if they were getting worse for the away side, as Matteo Darmian was forced off injury, and replaced by Cameron Borthwick-Jackson, making just his second senior appearance for the club. However, the youngster played a big part in a controversial end to the half, as United thought they had equalised, only to have the goal ruled out for offside.

Winning the ball high up the pitch, Borthwick-Jackson slipped the ball to Jesse Lingard, who saw his cross curl into the corner of the net. Althought the referee did originally signal for a goal, it was then ruled out following consultation with his assistant, who put up an extremely late flag against Juan Mata, who was deemed to have been blocking Benaglio's sight.

Tentative start to the second 45

The second half started much more tentatively than the first had, with Wolfsburg enjoying possession as United sat back, with the English side worried about being carved open on the counter attack.

Van Gaal's men did have their chances to equalise though, and it was up to Benaglio to make another stunning save to keep Wolfsburg ahead, which he did by pushing away Memphis Depay's overhead kick.

Juan Mata went too, almost getting his toe on a loose ball in the area, whilst Andre Schurrle had a go with a long range effort from the other end, which De Gea did well to claw away from the net.

Wolfsburg could, and should, have wrapped things up with just over 20 minutes to go as a corner fell to Max Kruse who was free in the box, but he could only curl the ball wide with a left-foot volley.

You got the feeling that the game was picking up again, and things were getting even more tense as the teams entered the final stage. Martial thought he'd won a penalty when Naldo pulled him down as he ran forwards, but the referee deemed it to be outside the box, and Depay curled the resulting free-kick narrowly wide.

Whilst they were agonising over the missed free-kick, things got much better for the Red Devils, as CSKA went 1-0 ahead against PSV in the other game, a result which would have sent them through even if Wolfsburg held onto their lead. However, it took just two minutes for PSV to turn things around and equalise, meaning United went into the final 10 minutes desperate for a goal.

And it was that goal which they got, in somewhat fortunate, but certainly dramatic circumstances. Fellaini's looping header from a corner didn't appear to be going anywhere, but bounced off the head of Joshua Guilavogui and into the net.

It wasn't the last twist of the night though, as Wolfsburg immediately went up the pitch and scored through Naldo, who headed in from a corner for his second of the game. Adding to that, PSV went 2-1 ahead against CKSA, virtually assuring that they'd join Wolfsburg in the last 16, unless Van Gaal's side could score two late goals.

They did pour forward in search of it, as Martial sourned a chance before Chris Smalling, playing as a striker, had an effort blocked off the line, but it was never going to be enough. Naldo's unlikely brace had done the damage, and the Wolves topped the group, with United entering the Europa League after coming third. 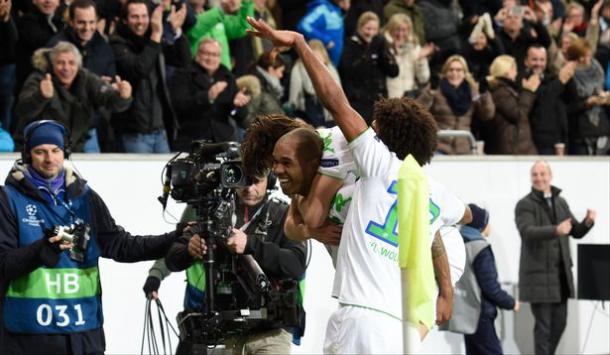 RB Leipzig vs Borussia Monchengladbach match preview: How to watch, kick-off time, team news, predicted lineups and ones to watch 2 days ago

Bundesliga Matchday 23: Three things to look out for&nbsp; 3 days ago

Werder Bremen vs Eintracht Frankfurt: How to watch, kick off time, team news, predicted lineups, and ones to watch 3 days ago

Who will replace Marco Rose at Borussia Monchengladbach? 6 days ago

TSG Hoffenheim vs Werder Bremen: How to watch, kick off time, team news, predicted lineups, and ones to watch 8 days ago

Borussia Monchengladbach vs Mainz match preview: How to watch, kick-off time, team news, predicted lineups and ones to watch 9 days ago

Bundesliga Matchday 22: Three things to look out for&nbsp; 10 days ago
//