Maximilian Arnold's second half goal cancelled out Nicolai Müller's opener, as Wolfsburg failed to get past a stubborn Hamburg side.

It was quite a steady start to the game early on, though things livened up with the first chance of the game. Max Kruse eventually got the ball down to a suitable height to volley at goal, only to see it fly well over the bar. HSV went straight down the other end with Pierre-Michel Lasogga, and his speculative, swerving strike brought a top save from the scrambling Diego Benaglio.

It was a promising beginning for the visitors, and they duly kicked on to open the scoring. A situation that carried no danger at all suddenly resulted in Dante losing the ball and sending Lasogga through on goal. Benaglio did well to deny the powerful forward when one-on-one, but Nicolai Müller rifled the ball under the Swiss stopper from the edge of the area to give his side the lead.

Bruno Labbadia's side had been tranformed in recent months under his tutelage and apart from André Schürrle's scuffed shot into the feet of René Adler, they were putting in a near perfect performance once again. Hamburg had stifled the Wolves' creative outlets, and only for some desperate defending they could have had a more comfortbale cushion before Wolfgang Stark sounded for half-time. 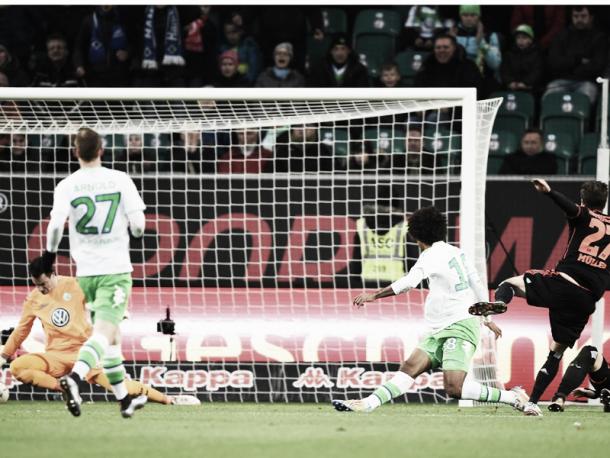 Wolfsburg called on Bas Dost from the bench at the break. The Dutchman had a great opportunity to level the game, although his header could only find the top of the net. Adler also had to react to Schürrle's powerful effort, beating his drive away to safety. The Wolves thought they should have had a penalty when Cleber went through the back of Dante to win a header; Stark remained unmoved, though it did look like they had been unlucky to be be awarded a spot-kick.

Adler was single-handedly keeping his side in the match, with save after save after save. Joshua Guilavogui's long-range bullet looked destined for the top corner, only for the veteran stopper to tip the ball over for a corner. The resulting set-piece was headed towards goal by Naldo, but Adler was equal to the task once more.

Wolfsburg would finally get their goal, and it was no more than they deserved. Maximilian Arnold stole a march on his marker at the near post and arrived at just the right time to stab home Vieirinha's powerful cross. Both sides seemed happy with the point and there was a real lack of chances after that. Wolfsburg, however, will be wondering just how they managed to drop two points.

Borussia Monchengladbach vs Bayer Leverkusen preview: How to watch, kick-off time, team news, predicted lineups, and ones to watch a day ago

Bundesliga Matchday 24: Three things to look out for 2 days ago

Jahn Regensburg vs Werder Bremen: How to watch, kick off time, team news, predicted lineups, and ones to watch 5 days ago

RB Leipzig vs Borussia Monchengladbach match preview: How to watch, kick-off time, team news, predicted lineups and ones to watch 8 days ago

Bundesliga Matchday 23: Three things to look out for&nbsp; 9 days ago

Werder Bremen vs Eintracht Frankfurt: How to watch, kick off time, team news, predicted lineups, and ones to watch 9 days ago

Who will replace Marco Rose at Borussia Monchengladbach? 12 days ago
//