A solitary goal from Jonathan Schmid was enough to seal three vital points for Hoffenheim in their battle against the drop, and bring Hannover right back into the mix.

It was no surprise to see the game begin in such a tight and tense manner, especially given the plight of both sides. Therefore it was particularly agonising for Hannover fans to see Ceyhun Gülselam denied in specatular fashion. The Turkish midfielder connected brilliantly with Leon Andreasen's corner, only to see the ball bounce from the bar to the post and back out again.

Michael Frontzeck's men were clearly the better side, which made it that bit more frustrating when they went behind on the half-hour mark. A lovely, flowing move from Hoffenheim got them within striking distance, as the ball moved out towards Kevin Volland before he whipped in a great delivery to Jonathan Schmid. The Frenchman was able to flick the ball into the far forner with a fiving header, much to the delight of the home fans. 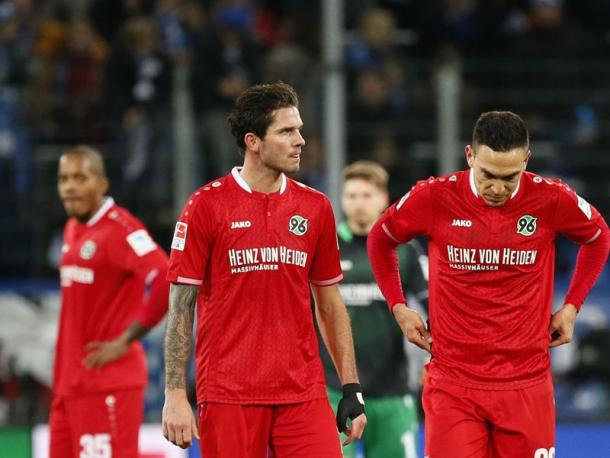 More missed opportunities in the second half

Edgar Prib fired the first real warning shot of the second period, as Hannover continued to come forward. The returning midfielder drifted inside before powering a shot just past the post, much to Oliver Baumann's relief. The lack of a clinical finisher seemed to be costing the visitors, making Frontzeck's decision to leave two strikers on the bench even more strange.

From there on, Hoffenheim started to exploit their opponent's desperate need for a goal. Kevin Volland, Primin Schwegler and Eugen Polanski all had good opportunities to put the game beyond doubt, but couldn't convert. Volland and Polanski were denied by Ron-Robert Zieler and poor finishing, respectively, though it didn't matter in the end as they ran out 1-0 winners.

Their first home win of the year coincided with Huub Stevens' first as head coach. It was a struggle, but a massive morale boost. Hannover, on the other hand, will wonder how they couldn't get a single point from the game - nevermind three.

Who will replace Marco Rose at Borussia Monchengladbach? 3 days ago

TSG Hoffenheim vs Werder Bremen: How to watch, kick off time, team news, predicted lineups, and ones to watch 5 days ago

Borussia Monchengladbach vs Mainz match preview: How to watch, kick-off time, team news, predicted lineups and ones to watch 6 days ago

Bundesliga Matchday 22: Three things to look out for&nbsp; 7 days ago

The Road Less Travelled:&nbsp;Pellegrino Matarazzo’s journey from New Jersey to the Bundesliga 9 days ago