That's all from us this evening, I've been Jonny Walsh and I do hope you've enjoyed our coverage this evening. Next up, Portugal's game against Iceland!

FULL-TIME! Austria 0-2 Hungary. Goals from Adam Szalai and Zoltan Stieber prove to be the difference against much-fancied Austria. That's put the cat amongst the pigeons!

87' STIEBER! THAT'LL SEAL IT! What a finish from the HSV man, as he races onto a through ball and coolly chips over the oncoming Almer to confirm the win for Hungary! 2-0!

80' Nemeth goes into the book for a rather rash challenge on Schöpf.

73' Massive chance for Austria, as Fuchs' ball from the left rolls into the path of Sabitzer but he can't keep his shot down.

71' Top stop from Almer, who gets across brilliantly to deny a Nemeth effort bound for the bottom corner.

69' First Hungary change, as they replace Szalai with Priskin.

66' RED CARD FOR DRAGOVIC! Certainly a debatable one, as he went in late to try and win the ball back. Austria now down to 10 - Hinteregger had scored as well..

65' Time for another Austrian change, as Okotie replaces Janko.

62' LIFT-OFF! Adam Szalai makes it 1-0 to Hungary, what emotion from him and the fans behind the goal. Superb move and finish!

60' First change for Austria, Sabitzer replaces Junuzovic who goes off with that earlier ankle injury.

55' Dzsudzsak! An effort from 35 yards swerves and forces a good save out of Almer. Confident keeping.

50' Little to nothing happening in the early exchanges in the second half. Hopefully the game sparks to life sooner rather than later.

46' Back underway! - Early chance for Hungary, easily saved by Almer.

HT - Tough to watch at times, but both sides have had chances. Harnik wasted Austria's best opening and Alaba rattled the post, but Dzsudzsak will feel he could have done better with a late first-half chance. All to play for in the second half!

43' And an even better one for Hungary! Dzsudzsak played through, but his touch and finish are really poor, flies wide.

41' Massive chance for Austria! Wonderful break down the left, Arnautovic crosses for Harnik and he fluffs the finish. Great play.

38' Almost another chance for Austria, as a long throw bobbles through to Janko and Arnautovic. Neither can make clean contact though, and the ball trickles out for a goal kick.

35' What a save! Gabor Kiraly gets down superbly well to deny Junuzovic's skidding volley! The resulting corner comes to nothing, but that was a top stop.

34' The resulting free-kick finds Szalai, but his free header is well over. That was a real waste for Hungary.

33' First yellow card of the game, as Dragovic hauls down Szalai cynically on the left flank.

28' Austria feel they should have a penalty as Fiola eases over Junuzovic in the box, but referee Turpin waves away the appeals.

26' Potential at both ends to make something of promising attacks - again with Kleinheisler and Alaba - but both come to nothing.

22' The Hungarian fans are already cheering every completed pass. It's been that sort of game so far, hopefully that chance comes around sooner rather than later.

18' The Werder Bremen man is back on his feet, much to the joy of the 12,000-strong Austria supprt currently behind Almer. Still moving with a little hesitancy, though.

16' Worry written across Kohler's face, as Junuzovic goes down with a nasty ankle problem. He seems to be okay, however.

14' A game that has largely been played in midfield, but one which still has that spark. Both sides are keen to showcase their shooting from range, but will it be Szalai or Janko who gets the first clear-cut opportunity?

10' Chances at either end! Alaba has a shot well held by Kiraly, before Kleinheisler blazes over at the other. Looks like the two Bundesliga men will be key this evening.

7' Austria looking impressive in midfield early on, the Junuzovic, Baumgartlinger and Alaba trio is working like clockwork - pardon the pun.

4' Kleinheisler responds for Hungary with a shot of his own, but it's comfortably dealt with by Robert Almer in the Austrian goal.

1' Almost the perfect opening for Austria, as David Alaba's long-range effort cannons back off the post. What a start that would have been!

16:40.  It looks like Austria have something rather special planned for tonight's game, in terms of a display before the match (via Paul Saffer, UEFA). 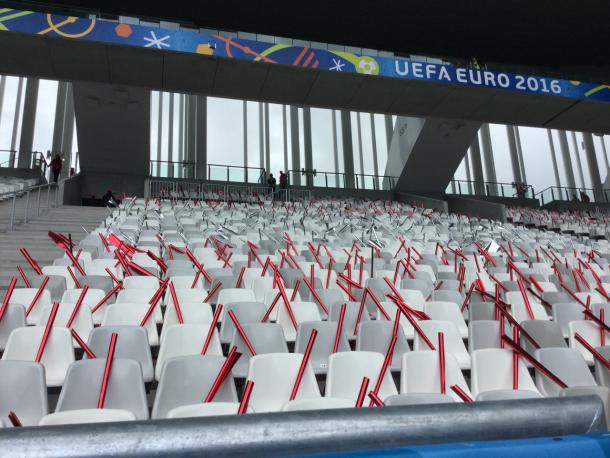 16:35. This is the first game of Group F, and the first of two tonight. The other features Portugal and Iceland, in what waill round up the first set of group games.

16:30. Only Gerg? Lovrencsics is missing for either side, with both managers able to name near full-strength sides. Tamas Kadar was a doubt for Hungary, but does start.

16:25. Marc Janko is the in-form man for Austria, having scored four goals in his last three games and six in the final six qualifiers.

16:20. The Austrian team is stocked full of Bundesliga talent this evening, with all but two players not having featured in Germany's top division. Even at that, Aleksandar Dragovic is reportedly on the verge of a move to Bayer Leverkusen. Leaving lone forward, Marc Janko, without any Bundesliga ties.

16:15. No surprises in either line-up, but one thing to note - Gabor Kiraly will become the oldest player to compete in the European Championships tonight.

The competition in both line-ups is hot too. Zoltán Gera and Ádám Pintér are neck-and-neck in bidding for a place in Hungary's midfield, with the man who will partner Ádám Nagy unclear. For Austria, Martin Harnik could see his position under threat on the right hand side, with Marcel Sabitzer looking to pinch it. The former was relegated from the Bundesliga with VfB Stuttgart this season, while the latter was promoted to the German top flight with RB Leipzig.

Unsere Burschen do have the advantage when it comes to team news though, with no concerns in their 23-man squad. Hungary, meanwhile, know that they will be without Gerg? Lovrencsics, who has been ruled out of the fixture with a knee injury. Yet a boost should come in the left-back role, with Tamás Kádár expected to be fit despite being a doubt in the run-up to the game.

Austria, on the other hand, have played five friendlies since qualifying for the tournament, alternating between three defeats and two victories. 2-1 losses to both Switzerland and Turkey had a 2-1 win over Albania sandwiched between them, while their most recent outings resulted in a 2-1 win over Malta and a 2-0 loss to the Netherlands. Cited as dark horses for the tournament, these friendlies have suggested otherwise. However, of course, they mean nothing in comparison to what their games in France do.

In terms of recent form, neither can boast much about their preparation for Euro 2016. Both have managed just two wins in their last five outings - with Hungary's two coming in their play-off with Norway that got them to France. Since then, they've drawn with both Croatia and the Ivory Coast in friendlies, before losing 2-0 to Germany at the beginning of this month.

Hungary are much more about the collective than focusing on star individuals, but will look for Balazs Dzsudzsak to provide inspiration from the wing. The 29-year-old has 18 goals for his country in 78 caps, and will be hoping to add to that number today.

The key player for the Austrians will undoubtedly be David Alaba, their best player. The Bayern Munich star often plays in defence for his club, but his talent allows him to take up a more advanced role for the national team, evidenced by his 11 goals in 42 games at international level, compared to 10 goals in 135 games for the Bavarians.

Although they’re underdogs today, Hungary have a much richer history in the Championships. They’ve never won the thing, but managed third in 1964, and fourth in 1972, extremely impressive feats compared to Austria’s history in the tournament.

For Austria, this is only their second ever European Championship. It’s the first one they’ve ever qualified for, having jointly hosted the tournament with Switzerland back in 2008. They’re currently at their highest ever world ranking, but were at their lowest back then, and it showed in their performances. Drawing one and losing two in the group stage, they went out having scored just one goal.

Good afternoon to one and all, and welcome to VAVEL UK’s live minute-by-minute commentary of tonight’s UEFA European Championship 2016 game between Austria and Hungary. Kick-off is set for 5PM, so stick with us as we get the team news, and build up to the first game of today’s schedule. 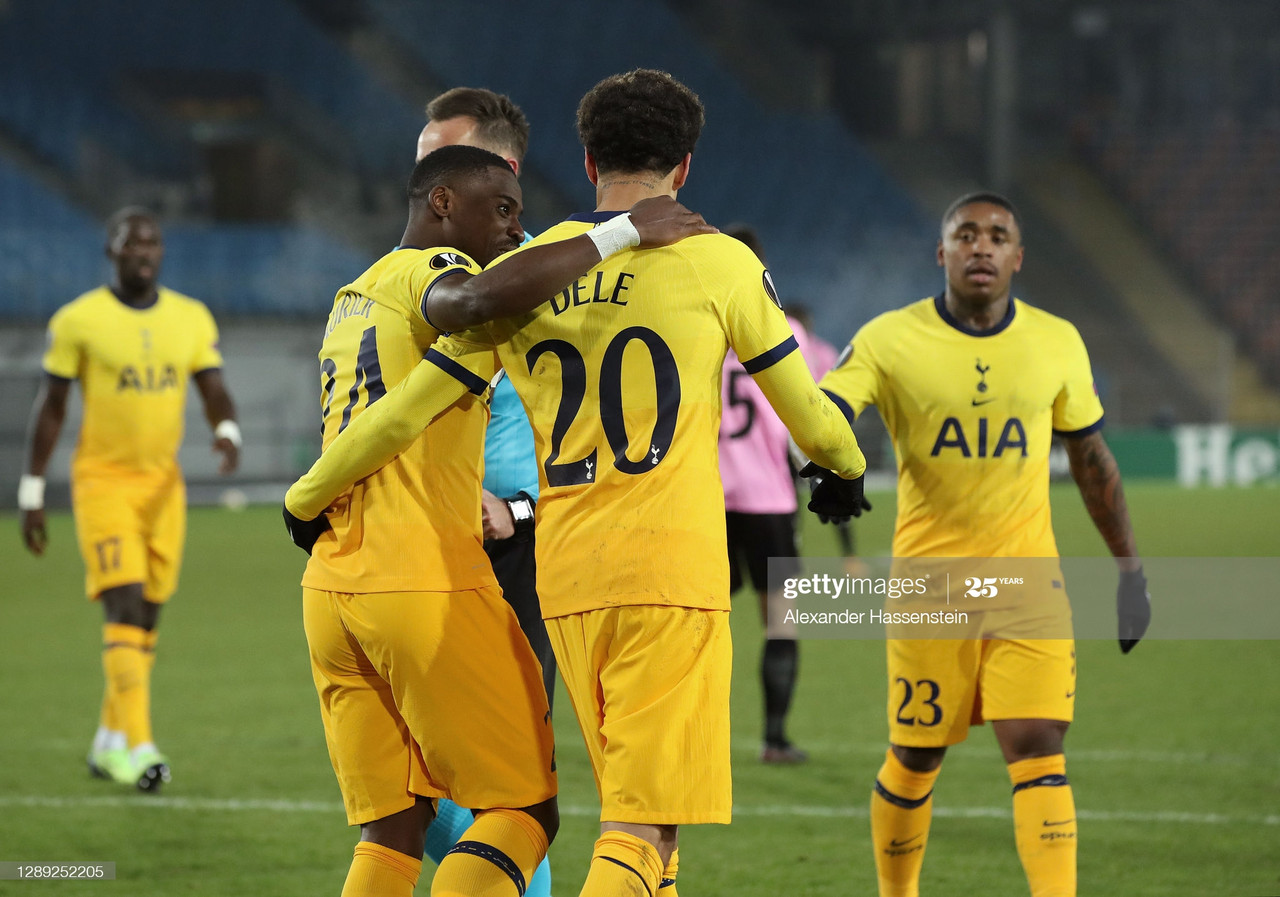 LASK 3-3 Tottenham: Bale and Son help Spurs progress to next stage of Europa League despite late Karamoko equaliser 11 hours ago

The Warm Down: FC Porto 0-0 Manchester City 2 days ago

The curious case of Werder Bremen 8 days ago