Late goals from Leonardo Bonucci and Mario Mandzukic gave Juventus a precious 3-1 win versus 10-man Sevilla as the Italians leapfrog their Group H rivals on Matchday Five of the UEFA Champions League, at the Estadio Rámon Sánchez Pizjuán.

In a bad tempered affair, referee Mark Clattenburg dismissed Franco Vázquez for the hosts, as well as sending manager Jorge Sampaoli to the stands.

With a place in the last 16 in the line, Sevilla boss Sampaoli went on the offensive with what appeared to be a 3-3-4 system, with full-back Sergio Escudero on the left of an attacking quartet.

The visitors travelled to the south of Spain relatively decimated by injury. With Gonzalo Higuaín and Paulo Dybala absent with injury, Mario Mandzukic led the line for the Bianconeri.

First choice centre-back Georgio Chiellini was fit enough for the bench on his return, with Daniel Rugani taking his place. Dani Alves returned to face his former side for the first time as a Juventus player.

It took the hosts just nine minutes to draw first blood. From a corner, a clearance from the visitors found defender Nicolás Pareja on the edge of the box. The Argentine defender steadied himself to catch the dropping ball to lash home on the volley with a sweet finish past Gianluigi Buffon.

The goal stunned Max Allegri's side, who began to resemble a shell of themselves without a host of key players. It was another defender Nicolás Escudero who began to cause problems on the left for Juve, slipping in Luciano Vietto shortly after, before shying from 20 yards himself just over Buffon's goal, as Los Rojiblancos sought to double their advantage.

Marchisio levels from the spot

Juve began the find their feet as the opening period wore on as efforts from Mario Mandzukic and Sami Khedira went narrowly wide. Their cause was then aided after Franco Vázquez received a second booking on 36 minutes, leaving Sevilla a man down with just under a hour to play.

As the break approached, Leonardo Bonucci was felled in the box the opposition penalty area, as referee Mark Clattenburg pointed to the spot to howls of derision. Claudio Marchisio stepped up to fire under Rico's body to level the scores on the stroke of half time, after a fiery first 45 minutes in Seville.

A man up and with the chance to leap frog their opponents into top spot, Juventus set about their task to take the lead, however on 53 minutes it was Adil Rami who almost regained the lead for the hosts, from a corner.

With an already incensed Sampaoli prowling the technical area, referee Clattenburg then sent the Chilean to the stands just short of the hour mark. With twenty minutes to go, the game had descended into a scrappy affair much to the chagrin of The Old Lady, with just the one low save for Sergio Rico to make.

With a place in the knockout stages far from assured for the visitors, the Spaniards continued to frustrate their opponents, sitting with ten men behind the ball. Sevilla however crept forward and had half chances of their own that lacked conviction.

With six minutes to play however, Juventus struck the vital blow. Having had few clear chances in the second period, another long ball looped into the box, but on clearance the ball found defender Bonucci screaming forward. The Italian drove a low shot from the edge of the D past Rico, to break Sevillan hearts. 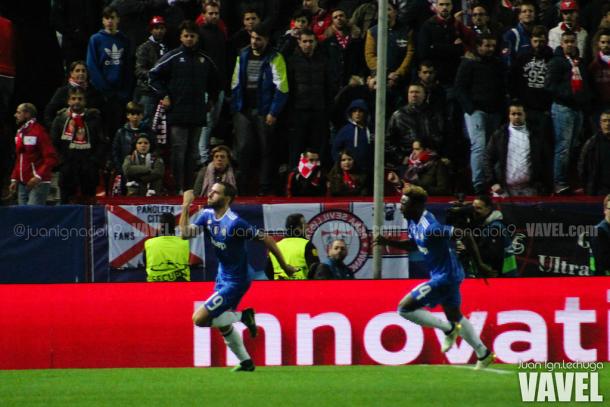 As Sevilla pushed for an unlikely equaliser, Mandzukic added a third on the counter, as Juventus take home a vital three points back to Turin.

The result sees Juve go top of the standings with 11 points. After Lyon beat Dinamo Zagreb 1-0, Jorge Sampaoli's men just have to avoid defeat in France in a fortnight to progress to the knockout stages.

Valencia keen on bringing in Keita Balde4 minutes ago

As it happened: Leganes 2-2 Real Madrid23 days ago

As it happened: Real Madrid crowned champions after victory at home to Villarreala month ago