"The minimum aim is to reach the semi-finals," President of the Italian Football Federation Carlo Tavecchio declared to reporters this week as he met up with the U21 squad at their headquarters in Coverciano.

"There's a lot of expectation because we have big objectives. We've already achieved the goal of having the best squad available to the coach (Luigi Di Biagio)," said Tavecchio.

Clearly Tavecchio backs his nation's young blues to do well in this year's Under-21 European Championships and he has every right to because this is one of the most star-studded and experienced Azzurrini squads ever.

With a combined 986 Serie A games between them, Di Biagio's 23-man selection is the most well-capped in history - almost doubling 2013's previous high of 554 top-flight Italian league appearances.

Speaking ahead of the tournament, the manager Di Biagio said the objective was to 'win.'

"We know that expectations are high, we take them on board, we don't hide from them. This may be the strongest national squad in the last 20 years," continued Di Biagio. 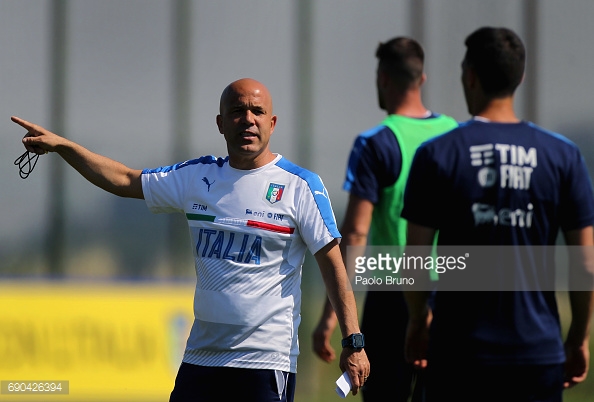 Di Biagio compares the strength of his team to the class of '96 who overcame a Raul-inspired Spain on penalties to lift their third title.

Some of the graduates from that team two-decades ago include Gianluigi Buffon, Fabio Cannavaro, Francesco Totti and Alessandro Nesta.

Now, we're all familiar with how the careers of that World-Cup winning quartet skyrocketed, so, no pressure lads.

Since replacing Diego Lopez in net as a 16-year-old, all eyes have been on Rossoneri's teenage sensation Gianluigi Donnarumma. The youngest member of the squad, Donnarumma could prove pivotal to Italy's chances of success if he carries on the form he showed in last season's shot-stopping display. Making more saves (147) than any other Serie A goalkeeper and keeping 12 clean sheets in doing so, Donnarumma is only likely to add zeros to his price-tag after a fortnight in Poland.

Protecting the Milanese giant is likely to be a centre-back duo of Daniele Rugani and Mattia Caldara. The stern pairing have plenty of Serie A games under their belt and that should undoubtedly show in their fearsome and cohesive defensive work. But while the Italian rearguard is always traditionally sturdy, Andrea Conti may well be the standout defender thanks to his attacking work. With eight goals and five assists from bombing down Atalanta's right-hand side, the 23-year-old wing-back was vital to his side's fourth-place finish last season.

Midfield may be where Italy fall short against the giants of Spain and Germany this year but if Lorenzo Pellegrini can conjure up the same sort of creativity he did for Sassuolo last season, the dynamic attack in front of him will duly benefit.

Headlining the forward trio will undoubtedly be Domenico Berardi and Federico Bernadeschi. Since suffering from an injury early on in the season, Berardi hasn't hit the form many thought he once would but his ability cannot be understated. The most decorated in terms of senior international caps with nine, Bernadeschi is probably Italy's key outfield man. Comfortable on the wings, his eye for a pass and eloquent dribbling makes him a threat to any opposing defence. Expect this man to be in the mix for player of the tournament should the Azzurrini go all the way.

Borussia Monchengladbach vs RB Leipzig: How to watch, kick-off time, team news, predicted lineups and ones to watch 10 hours ago

Eintracht Frankfurt vs Werder Bremen Preview: How to watch, kick off time, team news, predicted lineups, and ones to watch a day ago

Bundesliga: Three things to watch out for during Matchday 6 16 hours ago

Olympique de Marseille vs Manchester City Preview: Team News, Predicted Line-ups, Ones to Watch and How to Watch 5 days ago

Werder Bremen 1-1 Hoffenheim: Honors even at the Wohninvest Weserstadion&nbsp; 6 days ago