Goals from Michael Travnik, Tomas Chory and Michael Luftner gave the Czechs a well-deserved but surprising 3-1 victory over Group C favourites Italy in their second Under-21 European Championships match up.

Luigi Di Biagio's Italy flew out the traps from kick-off; blitzing into the Czech box inside 13 seconds.

From there the Azzurrini hunted for the opener - and they might have found it had Federico Bernardeschi chose placement over power in his 11th minute chance.

So, when FK Jablonec's nippy midfielder Travnik fired Vitezslav Lavicka's Lvicata (or 'Little Lions' as the nickname is translated) into a surprise lead, the crowd were stunned.

Stunned, but jubilant as Tychy City Stadium was swarmed with a swathe of red shirts supporting the underdogs.

Travnik latched onto Patrick Schick's neat flick on before gliding past Juventus' Daniele Rugani, who had lost his footing by the time the 23-year-old had evaded him.

From there Travnik teased and tricked Italy's giant shot-stopper Gianluigi Donnarumma. The Milanese headline maker spread the entirety of his lanky, 6ft 5" build but could only muster a fingertip onto the bottom-corner finish.

After striking first blood, the Czechs succeeded in riding the oncoming waves of Italian attacks. Not many had predicted a 1-0 half-time result in their favour.

Czech subs make an impact after Lavicka rolled his dice

Genoa's Lukas Zima was, as expected, kept busy throughout the second half. He'd already stretched out to deny Bernardeschi's snap-shot before reacting well to Domenico Berardi's sweeping free-kick.

But the 23-year-old was helpless in denying the Sassuolo man second time around. Berardi had drifted into an unforgivable space between the Czech centre-backs to give himself space to force the ball past Zima.

Andrea Petagna then had a golden chance to complete the turnaround 15 minutes from time. As the product of a swifter counter attack, Petagna faced only an onrushing Zima but the striker chipped attempt was too heavy and lacked composure.

Watching his team crumble from the sidelines, Lavicka rolled the dice; introducing wide-man Havlik and number nine Chory for the final ten.

And the subs made an instant impact, stunning Di Biagio's Italians for second time; Havlik and Chory combined before the latter brushed it past Donnarumma on the 79th minute.

Czech's stars of tomorrow then put the game to bed six minutes later thanks to a goal of the tournament contender from Luftner.

Pushing on from defence, Luftner took control of the ball on the halfway line before brushing aside the pressing Azzurrini players. Then Luftner hit a top-corner strike sweeter than he ever has before, beating Donnarumma from well over 30 yards.

The result gives the Czechs hope, the Germans an advantage and leaves the Italians with questions to answer as Group C is flung wide open. 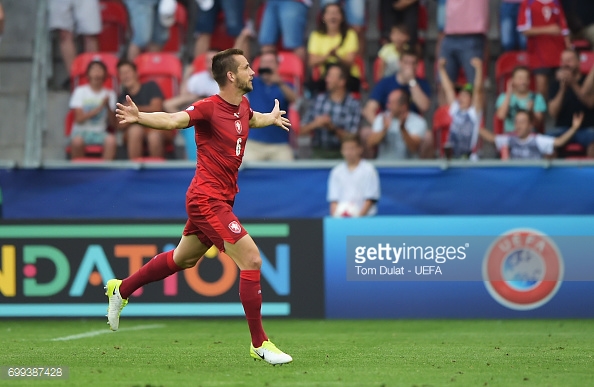 Schick and Petagna clash in the battle of the targetmen

In build and style, Schick and Petagna are nothing alike but in substance, not much differs between the two targetmen.

A product of Atalanta's millennial golden era, Petagna announced himself on the Serie A scene last season during the club's best ever top-flight finish.

Petagna has a neat touch, for a big man, and his bulky, Diego-Costa-like physique makes him a formidable opponent for any defender.

Similarly, Sampdoria's Schick is tidy despite revelling mainly in the air. However, the latter appears lankier and heavily depends on his left foot - a manner which has earned him comparisons with the classy Robin van Persie and caught the eyes of Italian giants Juventus.

A goal in a home game to Crotone fired the Czech striker into the mainstream.

Dennis Bergkamp, eat your heart out because the 'Schick Flick' has such a nice ring to it.

Bundesliga: Three things to watch out for ahead of Matchday 4 9 days ago

Borussia Monchengladbach vs Wolfsburg Preview: How to watch, kick-off time, team news, predicted lineups and ones to watch 9 days ago
Restore your password
Please enter your user name or email.
Login Member or Writer Panel
Enjoy your own Customized Newspaperwith VAVEL topics' carousels!