What would you buy if you had £200m in the bank? Your imagination can really run wild when you are presented with such an astronomical eye-opening figure.

If we were to translate that number into items of value, the same amount of money would get you 55 versions of the world’s most expensive car, the Koeneigsegg Trevita, five editions of Tom Cruise’s private jet and you could build another Playboy Mansion after purchasing the current world-famous property.

But is a football player simply made of flesh and bone really worth that much money?

A deeper meaning to buy-out clause

Since signing for the five-time European champions from Santos for £48.6m in 2013, the 25 year-old has scored 68 goals in 123 appearances. That’s almost £3m per goal but this abnormal sum cannot be attributed to his performances on the pitch or the two La Liga crowns and three Copa Del Rey’s he has won at the Nou Camp.

The staggering £200m sum translates to a buy-out clause after the Olympic gold medallist signed a five-year deal with Barcelona last season. However, the record-breaking deal comes with deeper meaning from the Parc des Princes.

Al-Khelaifi’s business previously had a kit sponsorship deal with Barcelona, which expired last month after the two parties failed to reach a fair agreement on a new deal. His organisation, that will no doubt have some interest in the 2022 FiFA World Cup, wants Qatar to be seen as a major player in world football.

On Neymar’s side, it was known that the Brazilian playmaker was unhappy with his place among the strike force of his fellow South Americans Lionel Messi and Luis Suarez, and he feels his name should be the main attraction.

Statistically over the last three seasons, the Argentine ace Messi has been the leading scorer with 103 goals but the statistics also show that Neymar has assisted in 101 of these efforts.

With these two factors in mind, Neymar’s move to PSG is both a personal and powerful statement. On the one hand, you have Al-Khelaifi who wants to show that Qatar is a football force to be reckoned with. And what would be a better way to assert your dominance? By transcending the transfer market into new heights and making Paul Pogba’s £89m move to Manchester United in 2016 look like two pints of lager and a packet of crisps. 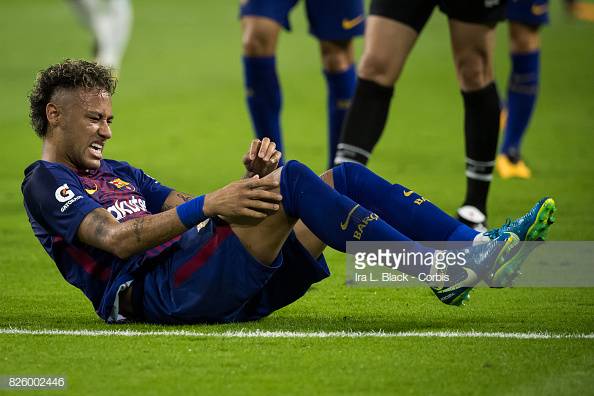 High price tag can have reprecussions

On the other hand you have Neymar, who will earn £40.7m a year in the deal worth £872,000 per week in wages, and he wants to prove he can make success of a team built around him with the likes of midfielder Blaise Matuidi and striker Edison Cavani in support.

However, this overbearing price tag on a young talent can come with huge repercussions if his value does not reciprocate into French Ligue 1 titles or at least a good few runs in the Champions League.

Manchester United’s Pogba has been the most recent case of this situation where he was placed with high expectations after a record investment last summer, only to underperform and disappoint.

He scored five goals in 30 appearances as United finished seventh in the league, and who could forget the infamous profile blunder of the ‘emoji game,’ where he had his own logo plastered over Old Trafford against Leicester City only to hardly make an impact.

And let’s not forget, Neymar has an injury history. Since suffering a painful back injury with Brazil at the 2014 FIFA World Cup, Neymar has had various strains and pulls with his thighs, hamstrings and abductor muscles, keeping him out for variable lengths of time.

It is for these reasons that no person from any sport should be valued at such a reckless and disregardful price, leaving the heads of UEFA’s Financial Fair Play committee scratching their heads.

Simply put, this is where football has reached a new financial sphere but has sunk to an immoral low.

Valencia keen on bringing in Keita Balde 8 months ago

3 key moments as Getafe’s Europa League dream comes to an end&nbsp; 8 months ago