Bundesliga side Wolfsburg have completed the signing of Augsburg captain Paul Verhaegh for a fee of just under £1.5m, with the defender signing a two-year deal at the club.

The 33-year-old will wear the number three shirt for his new club and undertook his first training session with his new team-mates on Monday afternoon.

Wolfsburg sporting director Olaf Rebbe told the club's official website that Verhaegh "can lead his team both on as well as off the pitch" having previously captained Augsburg in the Bundesliga.

Rebbe added that the club are "delighted" to have secured the signing of "one of the most consistent full-backs in the league" , giving credit to "Stefan Reuter for making Paul’s transfer to VfL possible."

The Green-Whites' head coach Andries Jonker stated that Verhaegh "will further strengthen our defence", which has been weakened over the course of pre-season by "a number of injury-related absentees" including fellow right-back Christian Träsch.

Jonker admitted that the addition of Verhaegh will signal an "increased battle for places in the future" at full-back, but that the 33-year-old will "prove a vital point of contact for the young players" even if he does not make the first-team squad every week. 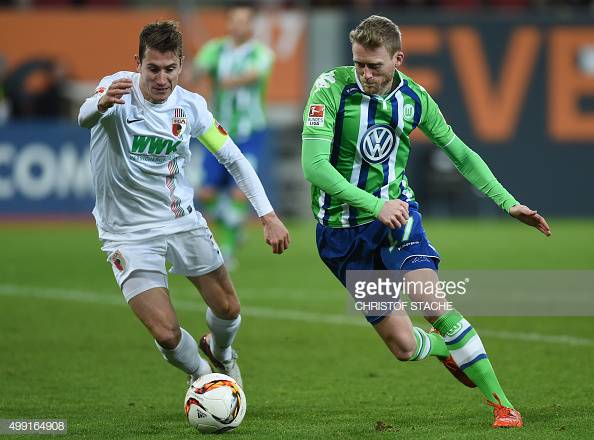 Verhaegh plied his trade in the Netherlands for the early part of his career, turning out for PSV U21s before signing for Jupiler League side FC Den Bosch in 2004.

He made 32 appearances for the club before moving to Eredivisie side Vitesse Arnhem in 2006, whom he went on to play 143 times for across all competitions before making the move to Augsburg in 2010.

Verhaegh spent seven seasons with Die Fuggerstädter and made 224 appearances for the club, scoring 22 goals and recording 15 assists.

The 33-year-old told vfl-wolfsburg.de that he is overjoyed to have "the opportunity to take on a new challenge at this stage of my career" and wants "to be a part of helping the club to achieve their goals".

The three-time Dutch international continued by saying that he had "some wonderful years in Augsburg", before going on to "wish the club, the team, all the staff and the fans all the very best" for the future.

Verhaegh is Wolfsburg's seventh summer signing following players such as John Anthony Brooks and Ignacio Camacho through the door as last season's relegation play-off winners look to improve on a disappointing 2016/17 campaign.

Mainz vs Borussia Monchengladbach Preview: How to watch, kick-off time, team news, predicted lineups and ones to watch. 12 hours ago