When Christophe Galtier bid farewell to the Stade Geoffroy-Guichard in May, it signalled the end of an era for AS Saint-Etienne.

Galtier’s highly successful tenure in southern France ended with a whimper, though. Les Verts finished the season winless in their last four and ended their home campaign with a highly lacklustre 5-0 loss to Paris Saint-Germain.

The prospects of no European football for the first time since 2013 and having no replacement lined up for their departing manager dawned on the ASSE hierarchy, who had a sizeable job to do over the summer.

Hunt for a new manager stalled:

Galtier announced on 9 May that he would be leaving Saint-Etienne after seven years at the helm.

Arguably enjoying their most successful period since the glittering days of the 1970s, Galtier was always going to be a difficult man to replace and that proved to be the case.

With no lure of the Europa League and a relatively small budget, attracting their first-choice targets proved difficult for Bernard Caiazzo, Roland Romeyer and Co.

In fact, prior to this summer, the club had not outsourced for the role of head coach since they hired Alain Perrin in 2008 - with Galtier being promoted from assistant when his superior was later relieved of his duties.

Les Verts reportedly went after the likes of Patrick Vieira, Toulouse boss Pascal Dupraz and Antoine Kombouaré - all of whom rejected the interests of the Ligue 1 outfit.

This worried fans but, eventually, Saint-Etienne got their man when Oscar Garcia - formerly of Brighton and Watford - was revealed as their new manager during June. 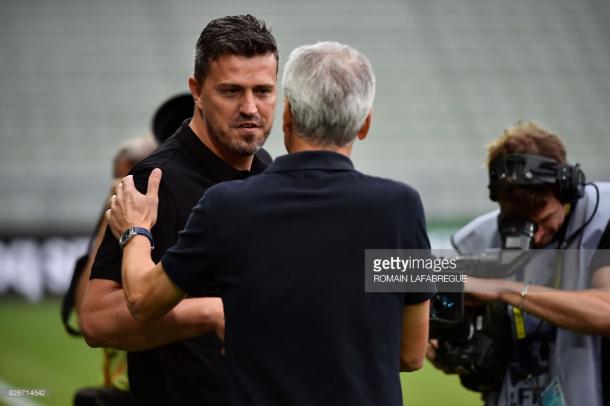 The appointment so far seems to have been a stroke of genius with the players responding brilliantly to the Spaniard’s more attacking approach on the opening weekend of the 2017/18 season.

After a relatively slow start when it came to finding an adequate successor to Galtier, worries have since been quashed after a full pre-season under Garcia and a great result over an impressive Nice side.

With no manager in place, it was understandable that those in charge were reluctant to start bringing in players to refresh a languid squad of players.

Not only did the owners have to inject a bit of drive back into the current playing staff, they also had to replace those who had left for pastures new.

All of which, perhaps barring Kevin Malcuit, were all rather expendable but still left a hole in the team that had to be filled by quality players.

Again, after a slow start to their business in the transfer window and missing out on targets such as Jordan Veretout, fans were worried by the lack of new recruits earlier in the summer.

These nervous feelings were quashed slightly when ASSE brought in record signing Lois Diony (24) from Dijon for an estimated £9m - more money than they had spent in three of their last five summers.

Garcia was also treated to the acquisition of Assane Diousse (19) from Empoli, who put in a stunning performance at the weekend to announce himself to the French public. The Senegalese midfielder impressed with his passing and presence in the middle of the park, completing 84.8% of his passes and winning three tackles.

Joining him in midfield is Hernani (23) after the Brazilian joined on loan from Zenit on Wednesday. The 23-year-old looks good to slot straight next to Diousse when ready.

The potency of these new signings is hard to judge at the early stages of the season but plenty of deals have been done behind the walls of the Stade Geoffroy-Guichard.

Overall, the summer of 2017 can so far be classed as a successful one especially when one considers the contract extension of star player Romain Hamouma, who looks set to stay for at least another year.

A young, bright set of players have joined the ranks and will play under a manager with equally bright ideas. They will, however, be judged on their ability to reclaim a European place at the end of the season which could still be a stretch considering Lille and Marseille's improvements.

There is a long way to go until then and, after a slow start, Saint-Etienne look to have prepared well for the year ahead.

Mainz vs Borussia Monchengladbach Preview: How to watch, kick-off time, team news, predicted lineups and ones to watch. 12 hours ago

Tottenham 3-0 LASK: Carlos Vinicius shines on debut as Spurs end the week on a high 14 hours ago

The Warmdown: England's ill-discipline costs them on off night 7 days ago

England: Progression or regression with the back-three? 11 days ago