Saint-Etienne have enjoyed a prosperous start to the season after three victories and a solitary defeat to Neymar’s Paris Saint-Germain.

Life under new manager Oscar Garcia has started well at the Stade Geoffroy-Guichard but it will be another two weeks before Les Verts face Angers SCO at home.

With the international break upon us, players will join up with their fellow countrymen with club football stepping aside for the 2018 World Cup qualifiers.

After Saint-Etienne’s impressive opening to the 2017/18 campaign, six players have been called up for their respective countries.

Ole Selnæs has been one of Saint-Etienne’s brightest performers this term and has been rewarded with a call up to the Norway squad set to face Azerbaijan and World Cup winners Germany.

The midfielder has adapted well to Garcia’s pressing game and, while yet to get a goal or an assist, has contributed well to the team’s overall style of play.

Selnæs made his awaited return to the Norwegian team in June after a lengthy absence for a friendly against Sweden and will likely make his first competitive appearance after just under a year.

The 23-year-old will serve the last match of his 11-month suspension against Azerbaijan but will be available to Lars Lagerback for the trip to Germany.

ASSE’s Man of the Match against PSG last weekend will not be joined by teammate and fellow countryman, Alexandre Soderlund.

Assane Dioussé arrived in southern France this summer and has clearly impressed Senegal manager Aliou Cissé, who has called up the midfielder for the first time.

Dioussé has been one of the key performers in Saint-Etienne’s impressive start, which sees Les Verts sit in third place during the international break.

The 23-year-old has become a fan favourite and has quickly imposed himself on Oscar Garica’s side with some stunning performances in the opening few gameweeks.

The former Empoli man could make his international debut against Burkina Faso on Saturday evening.

Senegal are third in their qualifying group (Group D) after two matches played having beaten Cape Verde Islands and lost to South Africa.

Another of Sainté’s new recruits, Alexandros Katranis is seen as one of Greek football’s greatest young prospects and the defender has subsequently been selected for the under-21 side.

The left-back will travel with the rest of the squad to Belarus to kick-start their Euro 2019 qualifying campaign. Greece U21s then face Moldova at the Peristeri Stadium, where Katranis made his league debut.

Katranis has already made two appearances for the under-21 side despite being 18 years of age. Clearly highly regarded by manager and Euro 2004 winner Antonis Nikopolidis, the youngster made his debut at this level in June.

Katranis has yet to make an appearance for Les Verts’ first team.

Oussama Tannane is another set to make a long-awaited return for his national side having not featured for Morocco since January.

The winger has played in three of Saint-Etienne’s first four Ligue 1 outings this term and assisted the solitary goal against Nice on the opening weekend of the season.

Tannane has not been able to add to his six caps for his country due to injury but will be available to Hervé Renard for their two fixtures against Mali at the beginning of September.

The former Dutch under-21 international is yet to score for his country.

Morocco go into these two World Cup qualifying fixtures in third spot after two games and are two points off Ivory Coast, who lead the way in Group C.

Bamba and Pierre-Gabriel - France U21:

Two of the club’s best young players, Jonathan Bamba and Ronaël Pierre-Gabriel have been chosen as members of the latest France under-21 squad.

Bamba has already scored twice in the league this season while RPG has been included in L’Equipe’s Team of the Week due to just one of his many fine performances thus far. 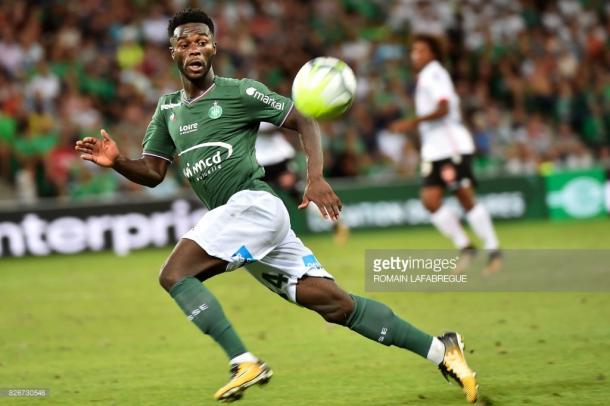 This has not gone unnoticed by manager Sylvain Ripoll, who has selected Pierre-Gabriel for the first time. The defender has played for the under-17s and under-18s in the past. Bamba, however, played 15 minutes in Ripoll’s first game in charge.

Les Bleus have scheduled a friendly with Chile in Laval before a Euro 2019 qualifier with Kazakhstan. France will be hoping to qualify for the first time since 2006.

The Saint-Etienne duo will be joined by the likes of Alban Lafont, Adama Diakhaby, Amine Harit and Allan Saint-Maximin.

Werder Bremen 1-1 Hoffenheim: Honors even at the Wohninvest Weserstadion&nbsp; an hour ago