The six-day stage race begins at Tanunda and finishes at Adelaide.

With four flat stages, a climb up the famed Willunga hill and a 90km criterium on the final stage, TDU 2015 promises to be a cracker.

In the absence of defending champion Simon Gerrans due to a crash, Cadel Evans will be going in as the pre-race favourite in his last appearance as a professional, while fellow Australian Richie Porte, who has said that he is in the form of his life, will be his main challenger.

A fairly flat stage with a loop at the beginning going through Nuriootpa, Angagston, Bethany and back towards Tanunda. Following which, the riders head towards Campbelltown. The only categorised climb of the day is at Checker's Hill after which it is pretty much a downhill towards the finish at Campbelltown.

Sprinters like Marcel Kittel (Giant-Alpecin), Mark Renshaw (Etixx - Qickstep) and Greg Henderson (Lotto-Soudal). It will also be interesting to see if youngster Caleb Ewan (Orica-Greenedge) can up his game and claim the leader's jersey.

The road points upwards right from the start line and then follows a rolling terrain until the categorised climb of Basket Range at 29.8km. There’s then a loop around Littlehampton and Hahndorf ridden twice before the finishing loop around Mylor, Aldagate and Stirling ridden three times. The rise up to the finish line should provide plenty of fireworks as sprinters' teams will have a hard time controlling the peloton.

An uphill start similar to stage 2, maily undulating terrain for about 120km, a quick descent finishing off with a sharp kicker to the finish, this stage suits the classics riders more than the sprinters.

The race runs paraller to the coast for more than 45kms till the categorized climb of Sellicks Hill, and this can mean only one thing - crosswinds. If the breakaway has the right chemistry, the winner of the stage and the race could emerge from that group.

The short steep climb of Willunga Hill (3km at 7%), which is the highest categorized climb of the race, has been the arena for some spectacular race winning attacks in most of the editions of the TDU.

In the 2014 edition, Richie Porte (Team Sky) won the stage finishing on Willunga hill, quick to follow was Simon Gerrans (Orica-Greenedge) who had paired up with Diego Ulissi (Lampre-Merida) to distance then race leader Cadel Evans (BMC Racing) and get into the leader's ochre jersey with a slender 1 sec lead! 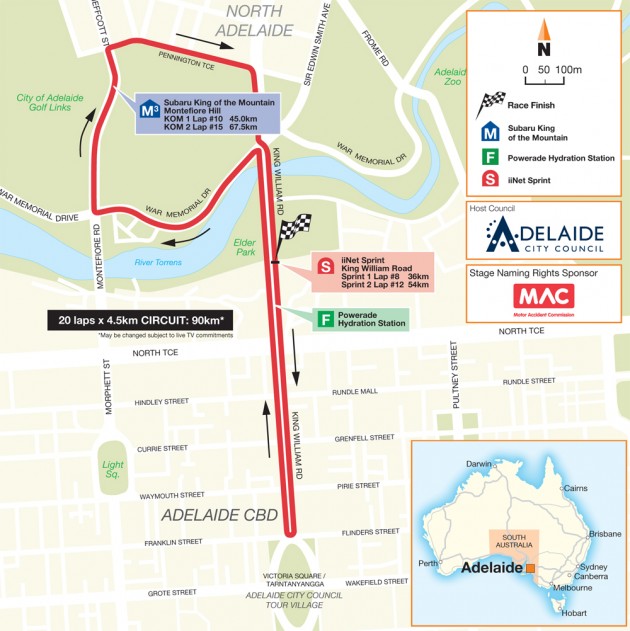 A 4.5km criterium of 20 loops around Adelaide's streets will not see a change in GC, but it will provide the last opportunity for the sprinters to go for the win.