Clay for Andy Murray has always been a source of great consternation for the Scot. His bête noire, if you will. But this weekend in Belgium, Murray will have to best his oft-foe of shale and brick, if Great Britain are to win the Davis Cup for the first time since 1936.

Murray's record on clay is not the stuff of relative nightmares by any stretch, but the numbers make for interesting reading. On clay, Murray's record is won 78, lost 38, with a win ratio of 66%, compared with the 77 and 84% on hard and grass courts respectively.

Before the 2015 season, the Brit was title-less on the surface, having won a ranking ATP event on every other one, even the now defunct carpet.

The French Open at Roland Garros are surroundings still largely alien to Murray - certainly the second week - as one of two major titles that elude him. Having been a losing semi-finalist in 2011, the 28 year-old then fell at the same hurdle in 2014 and again this year, to Novak Djokovic.

The Brit on his day, is capable of matching the best on the Parisian clay, but getting over the line against the likes of Djokovic and former clay court maestro and five-year Paris champion Rafael Nadal, has proved a step too far for Murray.

Scot has excelled during 2015 clay season

That said however, this season has been somewhat of a milestone for the Dublane-born player and former US Open and Wimbledon champion.  He must do so again in Ghent.

Back in May, Murray won his first title on clay in Munich, beating Philipp Kohlschreiber. Then less than a week later, won the Madrid Masters, beating hometown favourite Nadal 6-3, 6-2. 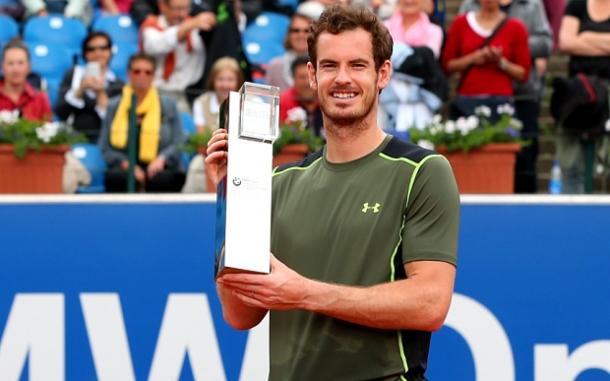 Andy Murray after his win in Munich: From the Telegraph

In the midst of the run between the Munich Open and his semi-final Roland Garros loss to Serb Djokovic - in the space of just over a month - Murray had strung together 15 consecutive wins on clay. So Murray at the very least has form, coming into arguably British tennis' biggest match in nearly 80 years.

The final's big match-up for Murray will be versus world no. 15, David Goffin. coming into the Davis Cup Final, Goffin has won five of his last ten, whilst the Briton has notched six. It is also worth noting, that the Belgian has won 9 out of 11 matches in the competition.

The two have played each other twice on Murray's favoured surfaces on hard and on grass, including at Wimbledon last year. Murray won both in straight sets, the most recent to the loss of a single game during the Paris Masters.

They were due to play on clay at the Rome Masters, earlier this year, before Murray withdrew to fatigue. So there is no real pointers as what to expect.

Of concern to Murray, will be his form during the recent ATP Tour Finals in London. He lost to Nadal and Stan Wawrinka, failing to reach the semi-finals. Murray had spent most of the build-up playing on indoor clay (as will be the case in Ghent) so that could of course be a more than plausible excuse.

This coming weekend plots two of the less likely finalist nations in Great Britain and Belgium to lift the famous Davis Cup. Belgium have two players inside the top 65 (Steve Darcis being the second highest ranked) whilst GB have James Ward as British no.4, at a ranking of 155, dropping from 89.

Despite Ward's heroics against John Isner in the first round versus USA - coming from two sets down no less - Andy Murray's role in the tie is gargantuan. Should Murray win both singles rubbers, both he and brother Jamie could have have the opportunity of a doubles win.

Should it come to fruition, it would be the crowing glory of Leon Smith's plucky GB side and for Murray would surely be a moment to top his Wimbledon title of 2013 or indeed his Olympic gold of London 2012.

Andy Murray has a date with destiny in Ghent.

Stay tuned to VAVEL over the next few weeks for all of our build up to the huge Davis Cup final as GB take on Belgium.  We'll be bringing you more reviews of all the action, more previews and more indepth discussion.

You may also like our Review of The World Group: https://www.vavel.com/en/tennis/571130-davis-cup-world-group-review-belgium-and-great-britain-defeat-the-odds.html

And our preview of the final: https://www.vavel.com/en/tennis/570653-2015-davis-cup-preview-britain-and-belgium-face-off-for-the-title.html