Finding myself lucky enough to have tickets for days 2 & 3 of the Davis Cup Final, the excitement was growing.

To be part of something historic would be absolutely amazing. History would be made over the weekend as both Great Britain and Belgium were aiming to win. GB had not won since 1936 and the last time the Brits had made the Davis Cup final was 1978! Belgium had only made the final once, and were soundly beaten by GB way back in 1904.

Europe wide terror not going to stop me.

Despite events in Paris in the lead up to the event, and the fact that Brussels went into lockdown a few days before, I was determined to go, the only thing that would have stopped me going was if the ITF had postponed the final.

Lots of people were talking about if the event would actually take place, or if they were going to go with everything on high alert in Brussels, but I was not going to let any terrorists or increased threat level stop me from attending what was going to be a once in a lifetime experience.

A friend and I started looking at alternative ways to get to Ghent from Brussels in case the trains were still not running. Tram tickets were purchased and posted to me and the threat level came down a level to be the same as Ghent (and London). Train tickets booked, bag packed and I was ready for the off.

So Saturday came, and with a very early start (3.30am) to get to Heathrow for the flight to Brussels early that morning. On a non eventful flight I landed in Belgium just before 9am, having managed to squeeze everything into hand luggage only, I wandered straight through security and the only evidence of extra security I noticed was soldiers at the airport, and having travelled to America that was nothing that alarmed me.

After much travelling, meeting with fellow supporters, and an explore around Ghent, I arrived and took my place in the electric arena. 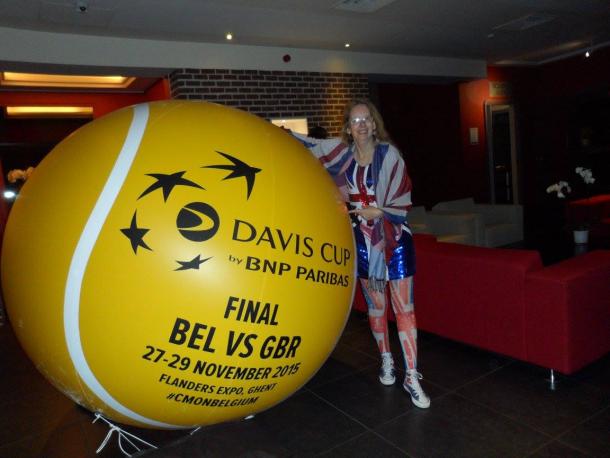 Sitting in the stands waiting for everything to begin there was a very large curtain surrounding the court (why?) anywhere the sound system was blearing out loads of songs including Sweet Caroline and they faded it out for us to do the "oh oh oh" bit. They played video of the routes to the final of both teams and had pictures of the players and their names on the curtain. Suddenly a countdown started and the curtain dropped, the players were on the court.

Jamie Murray & Andy Murray were our nominated doubles team, they were playing against David Goffin & Steve Darcis for the Belgians.

The first set was amazing and both teams were playing well, and the Brits won the first set. We were on our feet yelling and clapping them on. Goffin and Darcis started the next set a little better and seemed to sense that Jamie was nervous (we all were! We knew how much this meant to Andy, and if we are honest, to ourselves) and they started targetting Jamie, believing him to be the weaker player in the pairing (although he is the doubles specialist).

The Belgians managed to get the break and the noise level rose amongst the several thousand Belgians there! Goffin and Darcis took the second set (we Brits were not happy!), we were still doing our best to encourage the lads along, bringing out some of the chants used by the Stirling Uni Barmy Army (who were there in number again).

Every point the Belgians scored was greeted with a cacophany of noise, when we got a point we gave as good as we got - considering we were limited in number we certainly went for it. Our boys managed to step up despite the noise and the Belgians were still targetting Jamie but Andy was keeping him as calm as he could, and we were shouting encouragement to both of them, but especially Jamie to lift him.

We knew they could hear us, as they kept looking over to our direction, so we would go crazy again for them. It certainly seemed to be helping as the brothers managed to get the break in set three, and didn't look bck in the set. One more set to take the match and put us ahead in the tie.

As the fourth set began, with the Belgians still after Jamie, the chants went up from the Brits, 'Let's go Jamie Let's go,' and several 'Come on Jamie,' and 'Come on GB,' ringing out the set progressed. The Brits broke and we went wild again, the Belgians were still being noisey but we were not letting them drown us out. It was soon 5-2 to the Brits and Jamie would serve for the match.

Those pesky Belgians were still after his serve and Andy was definately helping by getting some amazing shots again, however, and fittingly in my view, Jamie held serve to serve out the match and we were 2-1 up - one more match and we would be world champions. We were going wild in the stands, Jamie and Andy had put us even closer to the trophy, and it would be Andy up first tomorrow to try and get the one remaining point we needed.

Exiting the stands, several random Belgians were high fiving me and saying "great match, great match" and my room mate and I went to meet up with more of the group we were with. Several Belgians came up to me and asked to have their photos taken with me, I have no idea who they are or where the photos are, but to be honest it was all good fun.

So, having decided to arrive a little bit earlier at the arena on the Sunday, we took several photos and started wandering around the whole arena. I was looking for the Order of Play board like there had been in Glasgow and Queens, but after going round the whole place I did not find it.

So settled on picking up freebies instead, admittedly there was not many free things for the Brits but I did manage to get a Davis cup final scarf that had Belgium on one side and Brits on the other. Making my way to my seat, the curtain was not yet up around the court so I was able to get a few more photos, and I saw Andrew Castle wandering about, so I went and got a photo with him and had a very brief chat. 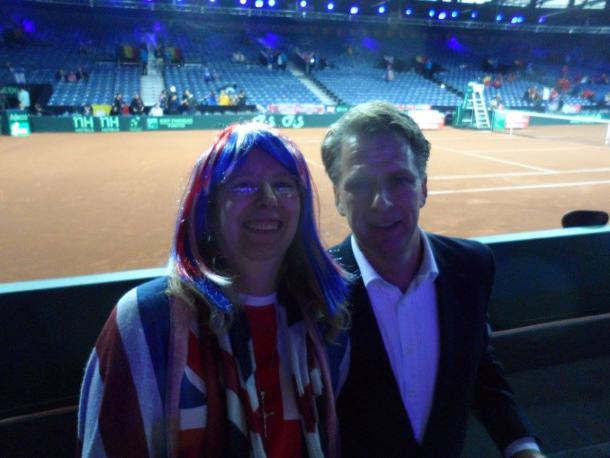 Going back to my seat I settled in ready for the action, the tanoy was playing the songs again, Sweet Caroline was back again, we were dancing and singing along and nothing had even started yet! Once the curtain fell again we started up with the cheering, as did the Belgians, there did appear to be more Brits today though and fewer Belgians, but there was still a LOT of Belgians.

Andy came out and started the match impressively, taking Goffin early and punishing the second serve, treating it mostly with the contempt it deserved (although it is faster than Andy's own second serve), we were cheering and jumping up and down (not during the rallys or the play of course).

Again we know he heard us as he definitely looked in our direction several times. Andy soon had the first set, we were very nearly there. Goffin decided to play better in the second set and this was much much closer, in fact he got several break points on Andy service games but they were all snuffed out by Andy. At 5-5 Andy got the break of serve in the set and would just need to hold serve to take the set. With chants of "I belive that we will win" starting up in the British stands Andy served for the set. He held his nerve and his serve and we were two sets up. A new chant started up "one more set, one more set" we were really close now, and we were getting excited.

'We could almost touch the trophy'

The third set started and Goffin broke Murray for the first time in the tie and was soon up 2-0. The Belgians were goig wild, and we were getting a little nervous, but we kept on cheering. Andy broke back and held his serve to level back up again to which we were yelling very very loudly. Goffin and Andy exchanged holds and the score was at 3-3, during all this I'd been glancing over to the team bech area and noticed that Edmund had been there throughout the match but Wardy had been missing for most of it, after the opening ceremony he was not there.

I took that to mean he had gone to the practice courts in the event he was needed, meaning that he had been subbed in just in case. Andy broke again and held his serve to be 5-3 up and one game away from ending a 79 year wait and making more history for British Tennis, at this point I notied that Wardy was back, he ws standing at the other corner, right where the trophy was. The server for the next game was Goffin, and he was still playing quite well, but Andy was playing better.

With the Belgians thinking they had won the point, Andy played some crazy retrieving and ended the drought with a sublime backspin lob over the Belgian. He sank to the floor, we rose as one and danced, cheered and cried.

We'd done it! we'd really gone and done it! GB were World Champions! We looked at each other whilst still cheering and started hugging each other. We definitely stayed for the presentation, watching our lads get their medals and trophies set me off again! Every player who had played a rubber for the teams during the year got a medal and trophy. Then our boys held the trophy aloft together - it was an amazing feeling. 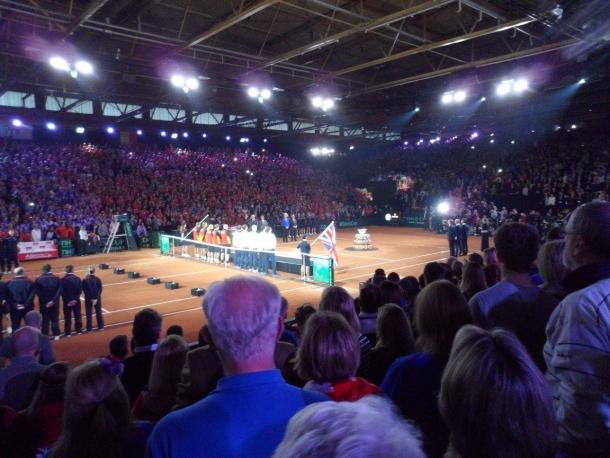 It was the most amazing weekend of tennis, but I knew it had to end. I was there to witness history, it has been the most amazing experience of my life and something I will never ever forget.