Neil Robertson responded after a poor showing at the Riga Masters to waltz past Mark Selby, Marco Fu and Ronnie O'Sullivan to win the Hong Kong Masters.

Strong start for the 'Thunder from Down Under'

After being stunned by Lukas Kleckers in the opening match of his Riga Masters defence, the Australian number one was keen to put his season back on track with a good showing in the Far East.

Robertson impressed on day one of the invitational tournament as he dumped World Champion Mark Selby out of the competition on his return from injury. Four half-century breaks and a 108 formulation proved the number six seed had been working hard on the practice table.

There were mixed fortunes for the English pairing of Judd Trump and Barry Hawkins as they looked to respond from a desperate World Cup final defeat against China. Trump defeated Shaun Murphy 5-3, whilst Hawkins was on the wrong end of the same scoreline against the impressive Marco Fu who made an impressive 132.

The tightest game of the opening round was played out between John Higgins and Ronnie O'Sullivan who was making his season debut. The Rocket struggled to find any sort of consistency but managed to squeeze past the World Championship runner-up after responding from 4-2 behind with just one break over 50. 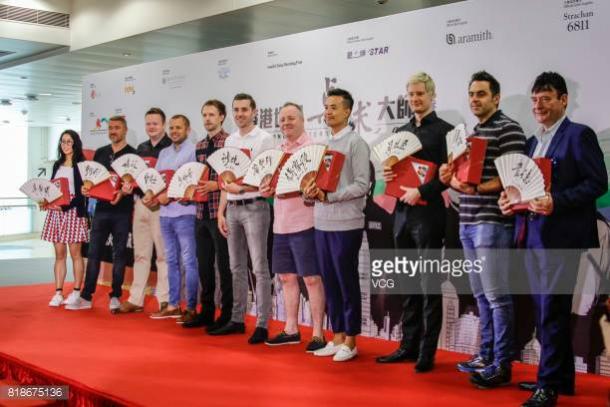 Impressive form from the Rocket sparks exciting contest with Trump

O'Sullivan played out another final frame decider in an epic semi-final with Trump as their ongoing series of tight matches continued. Breaks of 128 and 85 put O'Sullivan 2-1 ahead, only for Trump to win four consecutive frames, kick-started by an excellent 136. However, the multi-World Champion dug deep again to pull out a 126 contribution to draw level before edging out a five point victory in the decider.

Robertson found himself 3-1 behind to Fu who looked strong with another century break. Yet Robertson continued to score highly and four more half-centuries combined with a 100 break helped the Australian through to the final.

With both players finding their range at a peak time in the tournament, a classic was due to unfold on the last day of play as contributions of 70, 80 and 53 helped Robertson to establish a 2-1 lead in the opening exchanges. Both players made breaks of 67 in the fourth frame before number eight seed O'Sullivan potted a respotted black. A tournament-high 143 then put him in pole position.

Robertson drew level in frame six before the pivotal point of the contest unfolded a frame later. A tactical battle ensued and Robertson edged out a single-point victory to regain his lead. That moment sparked his game back into life and breaks of 68 and 82 secured a 6-3 victory and the Hong Kong Masters title.

Judd Trump: How the World Champion became the Ace in the Pack 2 years ago

Comebacks, deciders and surprises: 16 remain at the Snooker World Championship 2 years ago

Snooker World Championship: Why the focus should be on Cahill in rather than O’Sullivan out 2 years ago

From the sublime to the ridiculous: The opening weekend of the Snooker World Championship 2 years ago