Elaine Thompson cruised into the 100m World Championship semi-finals but it was German Gina Luckenkemper who raised eyebrows with an impressive personal best in the Olympic Stadium.

Drawn in the first heat, Luckenkemper had previously never gone under 11 seconds for the shortest distance on the track. Yet the German powered through in the fastest time of the heats, clocking 10.95 seconds ahead of 2013 silver medalist, Murielle Ahoure.

Britain's Asha Philip crossed the line in fourth but her time of 11.14 proved just enough to qualify as a fastest loser with only three from each heat going through. 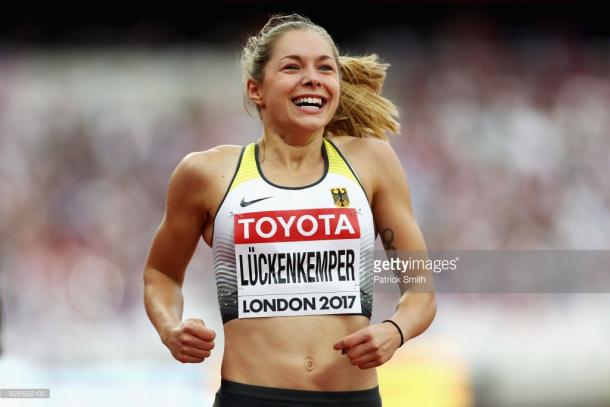 Thompson and Bowie progress with ease

Olympic champion Thompson was drawn in the second heat and cruised to victory as the rain poured down. She clocked 11.05 ahead of Crystal Emmanuel who earned a personal best with 11.14.

World Championship and Olympic medalist Torie Bowie eased through heat three in the same time as Thompson with the pair set to go head-to-head for gold. She comfortably beat Blessing Okagbare-Ighoteguonor who only just saw off talented Bulgarian Ivet Lalovia-Collio.

Lalovia-Collio defeated Britain's Desiree Henry by a mere hundredth of a second. Yet Henry squeezed through as the last fastest loser and will hope to improve in the semi-finals.

Schippers nudges into the semi-finals before Neita impresses

The following heat produced a slight surprise as 2015 silver medalist Dafne Schippers could only finish second to Marie-Josee Ta Lou who finished in 11 seconds flat. Brazil's Rosangela Santos also raised a few eyebrows by winning heat five in a personal best time of 11.04.

Yet a real moment for the home London crowd to cheer came in the last race when Daryll Neita defeated sub-11 second runners Natasha Morrison and Kelly-Ann Baptiste with the Brit producing a time just outside her personal best.