Great Britain celebrated a trio of athletes qualifying for the men's 800m semi-finals as Kyle Langford, Elliot Giles and Guy Learmonth all qualified.

Langford sneaks through as Bett and Kupers impress

With double Olympic and World Championship gold medalist David Rudisha pulling out of the competition through injury, the battle for the medals has been blown wide open.

Kenya's Kipyegon Bett took the first step to taking advantage of his compatriot's absence when he eased to victory in the first heat. Yet there was disappointment for Puerto Rico's Andres Arroyo who would have expected to qualify but only finished fifth and Algeria's Amine Belfrerar who slipped in the wet conditions.

A strong second heat saw a trio of big names progress as Thijmen Kupers clocked the fastest time of the heats before being followed across the line by Brandon McBride and Kevin Lopez.

Britain's Kyle Langford shook his head after finishing fifth but the speed of the heat dragged him through as a fastest loser despite initially believing his semi-final hopes had filtered out. 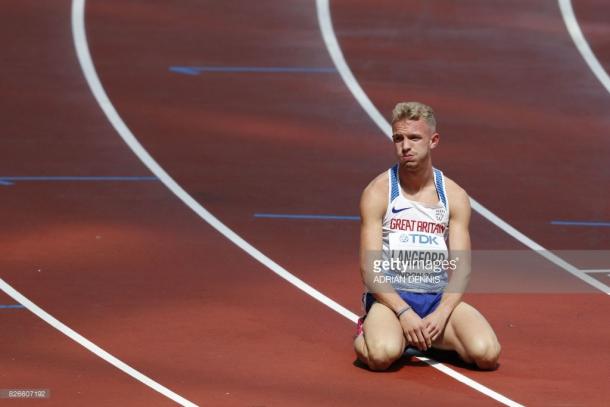 UK Champion Elliot Giles faired much better as he comfortably qualified from his heat in third position. Yet the Kenyan's were beginning to show their dominance as both Ferguson Rotich and Emmanuel Korir won their races.

However, Korir's heat saw both Alex Amankwah and Samir Dahmani finish outside the top three and the fastest loser positions despite being expected to progress.

Heat five saw the fastest man on paper in the competition win the slowest heat of the session. 2012 Olympic silver medalist Nigel Amos finished just ahead of Pierre-Ambroise Bosse and 2015 World Championship silver medalist Adam Kszczot, whilst Hamada Mohamed became the second man to fall in the rain.

Donavan Brazier and 2013 World Champion Mohammed Aman eased through the final heat and were closely followed by Britain's Guy Learmonth who will be buoyed by his time of 1.45.90 in the second fastest heat.

Yet 2015 World Championship bronze medalist Amel Tuka was stunned as he only finished fifth and was outside the fastest loser places.