Home teammate Jess Judd was confident enough to go to the front of the first semi-final in an extremely talented group of twelve. The steady pace closed the field together and one of the favourites to qualify, Gudaf Tsegay, fell and dropped to the back on the opening lap with her race plan in tatters.

As Judd began to tire, the big names began to close on the Brit as Olympic champion Faith Kipyegon hit the front going into the final lap. Flanked by Muir and defending champion Genzebe Dibaba, the three began to stretch away.

Yet Dibaba, the World record holder over a mile, inexplicably slipped off the pace as Kipyegon led the group home just ahead of Muir who had executed her plan impressively. Caster Semenya finished in third, as she continued her double attempt with the 800m, before Angelika Cichocka grabbed fourth spot.

However, a real shock unfolded behind with the likes of Judd, Tsegay and Dibaba out of automatic qualification contention. Germany's Hanna Klein, the slowest competitor on paper, finished strongly to take a final spot.

Meanwhile, the impressive Muir was delighted to progress and was full of praise for her teammate Judd. She explained "I just wanted to make it through. On another day this could have been a final. Jessica getting a personal best was excellent". 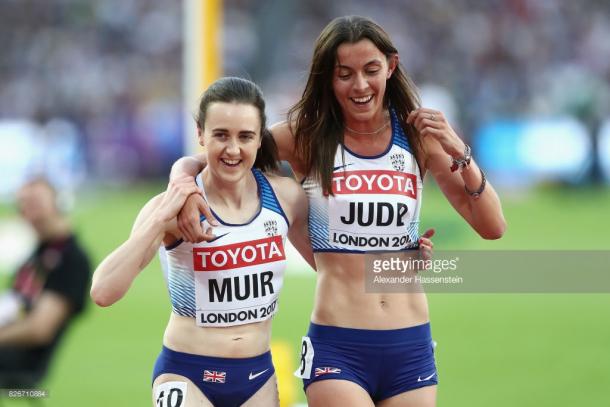 Weightman finishes strongly to book her place in the final

The British contingent were clearly full of confidence after excellent performances in the heats and Laura Weightman continued the trend of hitting the front on the opening lap.

Closely followed by serial medalist Jennifer Simpson and talented Kenyan Winny Chebet, a steady pace unfolded with 2017 World leader Sifan Hassan happy to sit at the back. Yet Germany's Konstanze Klosterhalfen decided her best chance to qualify would be to break away and she opened up a clear ten-metre advantage as she took the bell.

Hassan spotted the danger and strode to the front of the chasing group as both she and Meraf Bahta pulled Klosterhalfen back in. The duo progressed comfortably as the drama unfolded off the final bend behind them.

The German faded badly as her plans deteriorated and Simpson went on to finish third. Weightman finished strongly to take the roar and applause of the home crowd in fourth and later explained how "delighted" she was to progress.

Chebet lost out to Malika Akkaoui for the final automatic qualification spot in a second surprise of the evening, whilst Genzebe Dibaba breathed a sigh of relief as her first semi-final time proved enough to qualify as a fastest loser.

Darts: Premier League's three new additions thriving against the best in the business a day ago

The Masters: Round three recap 9 days ago

The Masters: Round two recap 10 days ago

Darts: Clayton Draws with Wright in Thriller on Premier League Night One 14 days ago

Darts: Three players with everything to play for at the 2021 Premier League 15 days ago

Darts: Premier League is a 'dream come true' for Jonny Clayton 15 days ago
//