Team Europe led 5-3 before the evening session got underway at day two of the 2019 Laver Cup, after John Isner of Team World defeated Alexander Zverev in three sets, before Roger Federer ousted Aussie Nick Kyrgios in a battle that went to a deciding set tie-break.

Rafael Nadal was a potential doubt for the Laver Cup, after he alluded to a wrist injury he picked up following his recent success at the US Open, where he claimed his 19th Grand Slam title.

Nadal was seen with heavy strapping on his right wrist whilst on the sidelines during day one's play, but still opted to play his rubber against Milos Raonic.

However, he wasn't able to convert any of them as Nadal held strong to hold on to three games all, where he broke the serve of the tall Canadian, which proved decisive as Nadal's usual quality on the court was beginning to show. The Spaniard pushed on to win the set 6-3.

Raonic broke serve in the fifth game of the second set where Nadal seemingly tightened up, giving away the game with a forehand unforced error. However, Nadal broke back straight away and forced a second set tie-break.

The world number two took control of the tie-break straight away, and with a trademark curling forehand passing shot on the stretch, took a 6-0 lead going into the changeover, before prevailing 6-3, 7-6 (1) in just over two hours.

After the match, Nadal admitted just how difficult the match was for him, saying: "I feel very lucky in the first set, it was unlucky for him because he deserved it. Later in the match I started to play better, moving a little better. I played a very good tie-break with some very good shots. We are up 7-3 which is very good for us." 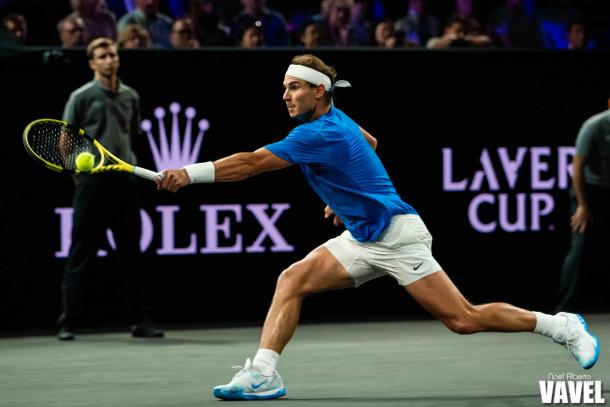 Just moments later, Nadal returned to the court to play the second doubles tie of the tournament alongside Stefanos Tsitsipas, where they took on the unpredictable Team World pairing of Nick Kyrgios and Jack Sock.

The scores sat at 7-3 to Team Europe and a win for Team World was vital to keep them competitive in the tournament, and the intent was clear from the start from the Team World pair.

They came straight out of the blocks with high intensity tennis to break serve in the opening game, a loud roar from the American as he passed Nadal at the net with a scintillating forehand down the line to convert break point.

The break proved decisive as Team World went on to claim the set 6-4, with Nick Kyrgios providing a sublime forehand down the tramline to set up set point and see out the set.

However, the momentum shifted in the second set as Kyrgios and Sock dropped their concentration, and Team Europe took full advantage to break serve in the fourth game, and raced to a 5-1 lead.

Despite getting back one of the breaks of serve, Team Europe served out the set 6-3 to take the match into a deciding set 10-point tie-break.

Kyrgios, in typical fashion, took control of the tie-break, and with an incredible flick style drop-volley at the net he put Team World ahead at 5-4.

They managed to maintain their concentration and see out the tie-break 10-6, bringing the scores back to 7-5 overall and revitalizing any chances Team World had of taking home the title for the first time. 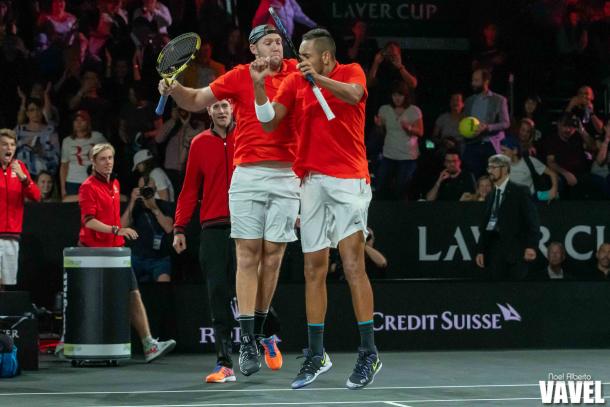