Taylor, 32, last time out defeated Delfine Persoon in August at the Matchroom Fight Camp to retain her WBA, WBC, IBF, WBO and The Ring female lightweight titles in a unanimous decision victory. She is still undefeated in her career (16-0 6 KOs).

Back in November of last year, Katie made the jump up to junior-welterweight and won the WBO title to see her become a two-weight world champion. If she is to win this weekend, will we see Katie dominate this division like she has at lightweight?

Fighting behind closed doors the event will be held at Wembley Arena, London. It is a landmark night as the fight card is topped by three women's world title fights.

Speaking to BBC Sport, Katie expressed how proud she is to see the sport progress.

She said; “When I was growing up there wasn’t any female boxers on these professional cards.”

“The fact there are three world title fights on one bill this weekend, I never thought I would see that growing up. That in itself is a great legacy.”

The two-time world champ and Olympic gold medallist is a true inspiration for not only female boxers but all female athletes across the globe.

Gutierrez, 37, comes into the fight with an undefeated record (13-0 5 KOs). However, it is the first time in her career fighting out of her home nation Spain and she will be undoubtably looking to pull off an upset on the night for her proud Spanish fans.

Her last fight saw her sail to a points decision over Keren Batiz and win the vacant WBA interim female lightweight title. Defeating Katie Taylor will see her become the first ever unified Spanish female boxer.

Terri, 24, will be looking to quiet the doubters after her draw against fellow British fighter Natasha Jonas. Terri retained her world title on the night, but some would argue she was lucky to get the decision. It was also a historical night as it was the first world title bout between two British women.

However, her opponent this weekend will be no pushover. Fighting out of Denmark, Thanderz boasts a perfect record and is the interim champion for Harper’s WBC title.

A win for Terri will potentially set up a future unification clash against the recently crowned WBO champ Mikaela Mayer who has been very vocal on social media to ensure she gets a shot at Harper. 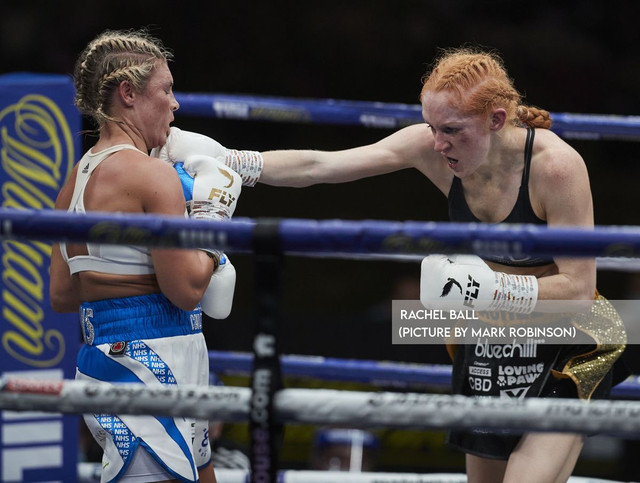 To start the world-title affairs on Saturday the 14th, Walsall fighter Rachel Ball, 29, will be appearing in the most important fight of her career as she takes on Jorgelina Guanini, 28, for the vacant WBA bantamweight title.

Ball (6-1) will stand a tough test against Guanini (9-1-2 1 KO) who is the current IBF junior bantamweight title holder since 2018. It is her first time fighting in Britain and she will be hoping the jump in weight ensures she is to become a two-weight world champion.

Rachel is a former three-time kickboxing world champion; she rose to fame on the boxing stage when she won a narrow points decision over Shannon Courtenay on Eddie Hearn's Fight Camp card in August.

You can watch the event live on Sky Sports Arena from 7pm and also on Main Event from 10pm. The evening is also available to stream for free on the Sky Sports YouTube and Facebook pages, as well as their website.

‘Did remarkably well considering that we only had 11 players’, coach Kanan said after the game against Jansenites a month ago

No mercy as SCC thumped Hollandse 5-1 a month ago

"It never gets easier does it?" as Perak edged out Singapore by a goal 2 months ago