The bridgerweight division had been debated for years but the WBC believed that it would need an appropriate name as it did not want to be a junior heavyweight or super cruiserweight add on. The perfect name for the division was set up when the bravery of young Bridger Walker inspired the world.

The 6-year-old risked his life for his sisters when a German Sheppard went to attack his younger sister when visiting a friend’s house.

Bridger told his parents: "If someone had to die, I thought it should be me"

This remarkable act of bravery inspired millions across the globe as Bridger was willing to make the ultimate sacrifice for his younger sister.

This made the bridgerweight division the perfect name to honour the young hero.

The plan by the WBC is to eventually reduce the cruiserweight limit to 190lbs after Ilunga Makabu defends his title against Olanrewaju Duradola on December 19th. This will then allow bridgerweight to span from 190-224lbs allowing a larger pool of talent to compete.

Despite the introduction of the new weight class, anyone who fights within the bridgerweight limit requirements will still be able to compete at heavyweight.

The introduction of a new weight class will allow the best cruiserweight contenders and the lighter heavyweight fighter to battle it out for a brand-new world title.

Below are the top 15 ranked fighters in the newest weight division. 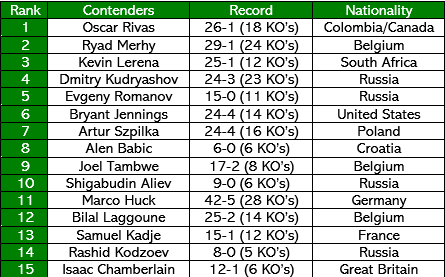 Judging by the ranking’s veteran Colombian, Oscar Rivas, will face off against WBA interim cruiserweight champion Ryad Merhy for the first ever title bout of the new division.

The ranking includes some familiar faces from both weight divisions and a strong group of top contenders.

At number 5 is Evgeny Romanov, the undefeated Russian is now 35 years old and the new division may offer a more direct path to becoming a world champion. Romanov ranked at 9 in the WBO ranking but this is the only organisation he has made progress in.

A title win at bridgerweight could elevate him massively in the WBC rankings meaning he could force a world title fight on more than one front.

Just below him at 6 is the experienced Bryant Jennings. The American is the perfect example of a small heavyweight who could have a greater chance of winning a world title against men who are a similar weight.

Jennings previously challenged Wladimir Klitschko for the WBA, WBO, IBF and IBO world titles but failed to do enough to dethrone the dominant Ukrainian. The other three losses of his career have come at the hands of bigger fighter who would not make the new weight limit.

Perhaps the surprise inclusion in the rankings is Alen ‘the savage’ Babic who has been placed at number 8 by the WBC. The Croatian burst onto the scene through Matchroom’s fight camp over the summer.

Babic has been a very entertaining watch in his press conferences and in the ring but with only six wins on his resume it is surprising to see him so high in the rankings.

Babic has made it clear that his mission to fight and knockout fellow countryman Filip Hrgovic but that fight seems hard to make at the moment due to the gap between the fighter in rankings and stages in their career.

However, if Babic can make his way up the bridgerweight ladder and prove he fight at a high level then he may get his wish sooner than if he took the traditional heavyweight route.

Huck is by far the most experienced on the list with 47 fights under his belt. Since his debut in 2004 he has racked up 42 wins and been a world level fighter for a long time. The division may be a perfect fit for the 36-year-old who has floated between the cruiser and heavyweight divisions.

The German may feel that he has been harshly done by being placed just outside the top ten especially as he is by far the most experienced man on the list and has still fought against the very best over the last few years.

At the foot of the 15 fighters is British cruiserweight, Isaac Chamberlain. The man from Brixton was one of the hottest prospects in the division after amassing 9 wins in as many fights across two years. This set up a fiery British bust up with fellow prospect Lawrence Okolie.

Okolie dominated the clash and has now gone to force himself up to world level, Chamberlain’s career on the other hand has suffered as a result and has failed to establish himself above British level. He has been surpassed by a number of British names and his name had disappeared from the cruiserweight scene.

Thankfully ‘IC’ has time on his side as he is only 26 years old.

Can bridgerweight give Chamberlain the chance to bounce back and get back to fighting in big fights once more.

The division looks set up to be an interesting addition to the boxing landscape and will set up some brilliant clashes that may have not looked likely before.

'We can take this team to the next level' as Singapore Khalsa association crowned league 2 Hockey champions. a month ago

‘Did remarkably well considering that we only had 11 players’, coach Kanan said after the game against Jansenites 3 months ago

No mercy as SCC thumped Hollandse 5-1 3 months ago

"It never gets easier does it?" as Perak edged out Singapore by a goal 4 months ago