SHE0
ENDa day ago

Rob Cross, Ian White and Glen Durrant are among players defending most ranking money in the coming months.

With the World Matchplay the next ranking major that is being played for, PDC analyst Christopher Kempf took a look at the players who are the defending the most and least on their Order of Merit in the coming months.

The PDC has a rolling two year Order of Merit meaning that for a player like Cross, it is a big year after his success in 2019 including his World Matchplay triumph. 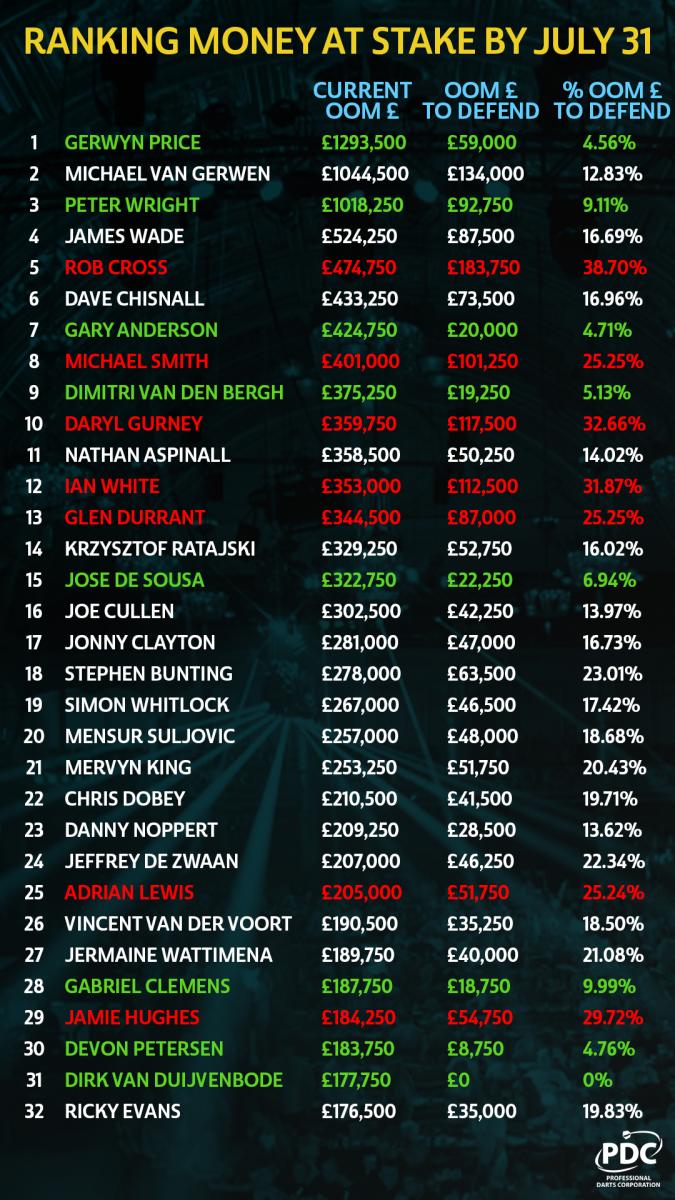 This will come off this year and with this representing nearly a third of his Order of Merit total with 38.7%, he will hope his Premier League stint will put him in good stead.

This means that out of his current £474,750, he has £183,750 of that to defend which also includes ranking money from the European and ProTour.

All are defending earnings from the World Matchplay semi-finals in Durrant, Gurney and Smith while White's European Tour brilliance in 2019 where he reached four consecutive finals will come off his ranking.

But at the same time for the likes of Devon Petersen and Dirk van Duijvenbode in particular, they are among those defending less than 5%.

Petersen produced a breakout year alongside Van Duijvenbode in 2020 and will look to make further progress in what is essentially a free hit ahead of 2022.

The latter in particular only claimed his Tour Card at the start of last year so will continue to move up the rankings.

While Gary Anderson and Gerwyn Price with not much to defend could make further progress - the latter in developing his Order of Merit lead as World Number One.

Luke Humphries also looks likely to join the top 32 with only 8% set to be defended by the recent first time major finalist.

Darts: Premier League's three new additions thriving against the best in the business 3 hours ago

The Masters: Round three recap 8 days ago

The Masters: Round two recap 9 days ago

Darts: Clayton Draws with Wright in Thriller on Premier League Night One 12 days ago

Darts: Three players with everything to play for at the 2021 Premier League 14 days ago

Darts: Premier League is a 'dream come true' for Jonny Clayton 14 days ago